Do you have compassion and cash left for another local fund drive?

It's for a dancing woman this time, not a walking man.

Lisa Ludwinski, a 31-year-old baker working to open Sister Pie in the West Village, started dancing at 9 p.m. Friday and vows to bust moves until 9 p.m. Saturday -- three hours before the end of an 11-day IndieGoGo campaign to raise $25,000 for final storefront build-out at 8066 Kercheval. 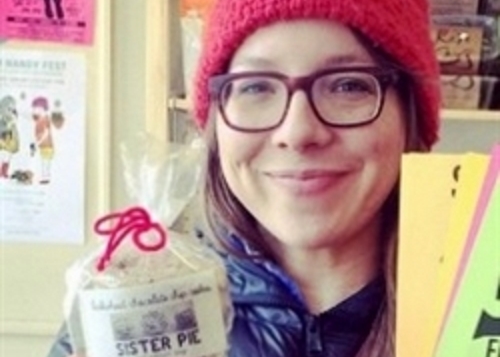 Ludwinski's "Dancebreak-a-Thon" is on public view at Paramita Sound, a record shop at 1417 Van Dyke, with donors invited to stop by for dancing and cookies. "When the clock strikes 9 p.m. on Saturday," the IndieGoGo page says, "Lisa will execute one perfect triple pirouette and our fundraising goal will be achieved! (Pirouette execution not guaranteed.)"

Ludwinski, who last summer won the $50,000 top prize in the yearly Hatch Detroit contest for emerging enterprises, is renovating a former hair salon in the West Village that she has leased since last July. She and one employee, Anji Reynolds, now bake at shared space in Midtown with no retail sales on site.

She describes the Sister Pie vision at its fund drive page:

Our doors will be open from 8 a.m.-6 p.m., six days a week. Sister Pie will use seasonal, locally sourced ingredients to create sweet and savory food: pies of various sizes, cookies, breads and breakfast pastries.

We will serve breakfast and lunch – ranging from breakfast galettes, buckwheat porridge, and savory scones made with organic eggs to vegetable-packed whole grain salads and sandwiches. The 900-square-foot storefront needs a complete renovation and kitchen build-out before Sister Pie can move operations.

The business' pies, cookies and other items are sold at Parker Street Market in the West Village, Germack Coffee Roasting Co. in Eastern Market, and SocraTea in MIdtown. The current monthly menu is here.