Talk about a quick rescue by first responders:

Fire fighters in St. Clair Shores, whose station is four blocks south of a Dairy Queen, chip in to replace tips for counter workers that were grabbed there Monday, Taryn Asher of Fox 2 News posts on her Facebook page.

The reporter, who'll have updated coverage during the station's 5-6:30 p.m. newscast Thursday, posts the photo at right and this news:

The St. Clair Shores Fire Dept. takes up a collection and gives the owner of Dairy Queen all the money stolen & then some!

But that apparently wasn't enough for several teenage girls, who decided to steal the tip jar. 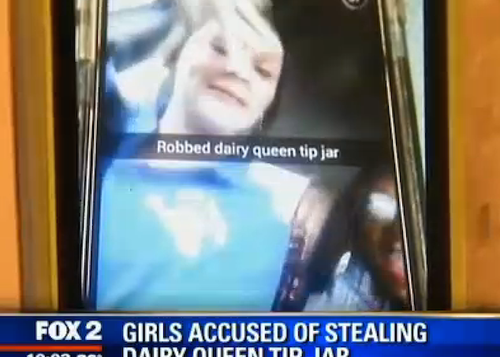 "I thought, oh my gosh, we're giving everything away today and they're stealing what they can't get,"  Dairy Queen Owner Liz Hope told Fox 2's Taryn Asher.

The teens decided to post the theft on the social media site Snapchat with the words: "Robbed dairy queen tip jar." Each proudly smiled in the camera, Fox 2 reports.

They sent it to all of their friends and then some, probably never thinking Fox 2 would get hold of it, Fox 2 reports.

"I think they are stupid. Who does that? They should be the dumbest criminals," Hope told Fox 2.

Dairy Queen's customers shared the Snapchat video and took pictures of the getaway car, license plate and all. Police now have that info, Fox 2 reports.

Hope said, "I don't want them to go to jail or anything. I want them to learn a lesson that they shouldn't be doing things like that, it's not how they should be growing up."