The site, her second, is at the Grand River Workplace, at 19120 Grand River Ave., MJ Galbraith writes at Model D.

Trish's Garage sells clothing, jewelry, and accessories, much of which is Detroit-themed. Rutherford's specialty are her self-designed and -made peplums, tops with flares at the bottom meant to flatter women of all shapes and sizes.

The Grandmont Rosedale Development Corporation opened Grand River Workplace in October 2014. The co-working space also hosts pop-ups, the first having been Love. Travels. Imports., an artisanal crafts boutique. Trish's Garage will be open until the end of the year. 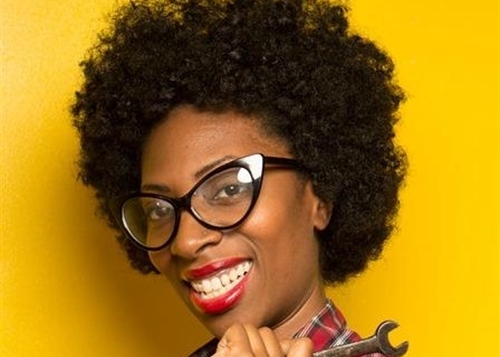 The shop's name comes from the owner's "alter-ego of sorts," she says. Rutherford describes "Trish" as "bold and fearless with her style." That part of her personality likes "to mix and match everyday pieces with trendy conversation starters."

As Ebony, Rutherford says on her "Team Trish" page, she depicts her style as "cute, sexy and playful, pairing absolutely anything with the right T-shirt."

At Rutherford's first pop-up, which had a two-month run during spring 2014 on Woodward Avenue downtown, she was part of a D:Hive program that trained her in business planning, pricing and money management at its Build Institute, Galbraith writes.

She's also a graduate of the TechTown Retail Boot Camp, where she learned to identify customers' needs.

Her new space, in a growing commercial strip that also includes two-month-old Pages Bookshop, was earned in a competition run by the Grandmont Rosedale Development Corporation and Revolve Detroit.

Model D and the Michigan Chronicle post a statement from Tom Goddeeris, executive director of the GRDC nonprofit:

"Trish’s Garage is exactly the kind of home-grown, locally-owned business we would like to see more of in our community. It embodies the creativity and entrepreneurial spirit that are needed to bring new life to neighborhood business districts like Grand River."