This image of a model is atop the Peace Collective's website. "I did not allow them to use the brand," says Detroit entrepreneur Tommey Walker Jr.

"I spoke with Ms. McKay [solicitor for a Toronto clothing firm] regarding Mr. Walker’s registered trademarks. This matter will be handled privately in an effort to amicably resolve the issues between the parties.

"Mr. Walker greatly appreciates the support for the Detroit Vs Everybody and Vs Everybody brands and trademarks that he solely created and will continue to vigorously enforce his valuable trademark rights."

Being a solo proprietor of a small business can be tough. Demands on the founder include production, recruiting, purchasing, marketing, pricing and strategic planning.

For Tommey Walker Jr., who started the successful Detroit vs Everybody clothing line in November 2012, headaches also include a cross-border defense of his trademarked slogan.

He challenges an Ontario startup's right to sell sweatshirts, tanks and T's that say Toronto Vs. Everybody with typography and layouts strikingly similar to his. 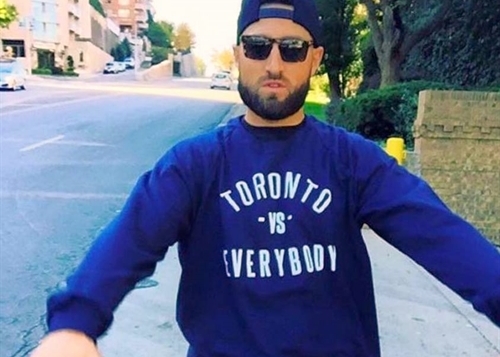 Blue Jays outfielder Kevin Pillar is shown in one of the knockoffs Oct. 17 before Game 2 of the ALCS, which Toronto lost. (Facebook photo)

"These guys are scumbags," he tells Deadline. "I've been in a battle with them for more than a year. We've sent a cease-and-desist letter."

The apparent trademark violator is named Peace Collective, ironically. It added other styles after introducing the Toronto vs Everybody line in spring 2014, and says it supports student meal charities with a share of proceeds.

Walker says he spoke to founder Yanal Dhailieh, who reportedly apologized -- but continues producing the knockoffs.

"Mr. Dailieh is the owner of the registered Canadian trademark 'Toronto Vs Everybody' and any allegation of infringement by Mr. Walker or his counsel is, in my opinion, false,"  Maureen T. McKay says via email early Wednesday.

'In no way infringes'

In a follow-up call, the Toronto trademark agent restates that her client "has exclusive rights to sell the products in Canada. . . . As far as I know, Mr. Walker's trademark applies only in the United States."

She shares a letter sent Sept. 21 to a Walker's attorney, Joseph A. Bellanca of the Hertz Schram law firm in Bloomfield Hills. It gives the Canadian Intellectual Property Office's trademark registration number for "Toronto vs Everybody" and adds:

Mr. Dhailieh has the exclusive right to use the mark in association with wearable garments and clothing including shirts, sweaters, jackets, and hats, within Canada.

Mr. Dhailieh neither markets nor licenses any products to be sold within the United States and, as such, in no way infringes your client’s American trademark rights.

The Toronto solicitor now threatens possible retaliation over the Detroit entrepreneur's complaints and asks if he contacted this news site to suggest an article. (He did not.)

Mr. Walker’s counsel has not contacted me in any way since I sent this letter and, as such, I presumed that he had accepted my letter as a complete response to his cease-and-desist letter of September 4th of this year and that the matter was closed.  I am therefore somewhat surprised to hear that he or his client has chosen to make the statements that you suggest that he has made in a public forum.

Any public claim of such alleged infringement may be damaging to my client’s brand and  I will be putting Mr. Walker’s counsel on notice that my client may hold his client legally responsible for any damage that may be suffered or incurred as a result of the publication of any such claim.

The border makes it tougher to pursue a legal remedy, acknowledges the Detroiter, who believes his registered trademark applies internationally.

The Peace Collective sells Toronto vs Everybody garments for men and women on its website for $30 (T's and tanks) and $60 (sweatshirts) in Canadian currency. They're also shown in its Facebook albums and on its Instagram page.

The Toronto business benefited from a surge of sales to Blue Jays fans during that team's American League Championship series this month, particularly after right fielder Jose Bautista last week posted an Instagram photo of himself and two teammates -- Dave Price, formerly of the Tigers, and Josh Donaldson -- in the shirts.

"They're aware it's our trademark," Walker, 29, says in a phone interview. "I did not allow them to use the brand. I disrespect these guys totally."

Dhailieh and business partners speak about the shirts in a recent blog interview. The owner and Roman Hessary treat the slogan as original in comments to Lululemon blogger Elizabeth Hammond for a post this month by the yoga and sportswear chain. 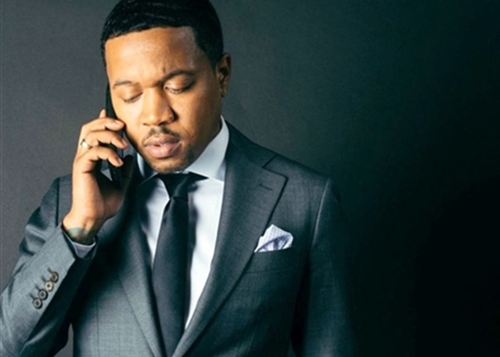 Tommey Walker Jr.: "They're pretending like it's their idea. I don't understand how they can do that." (Facebook photo)

"The first shirt was the 'Toronto VS. Everybody' style. I designed it when the Toronto Raptors were in their first playoff run in 2014," the founder is quoted as saying.

That was nine months after Walker's design gained national exposure when Detroit Free Press editorial page editor Stephen Henderson gave a Detroit vs Everybody hoodie to Stephen Colbert during an appearance on his Comedy Central show.

Hessary, a Peace Collective colleague, adds in the recent blog:

"We love our city and don’t always feel like the rest of the world sees what we see.  When we wore those shirts to the [basketball] games, we could see that people were hungry for an outlet to express this pride but didn’t have an edgy way to do it.  That’s why I think the 'Toronto vs Everybody' message resonates so much."

Walker saw the Lululemon post and feels ill-treated. "They're pretending like it's their idea," he says. "I don't understand how they can do that. They're not giving me any credit. They act like they came up with it."

The Detroit business owner and his suburban lawyer have worked to block other copycats. They get unsolicited help from Detroit brand loyalists, as show by a social media outcry over "Detroit vs Everyone" (a subtle wording change) shirts in a similar style that the Meijer stocked from a vendor. The chain stopped sales this week, posting on Facebook: "it's a little too close for comfort, so we're pulling these shirts from our two Detroit stores that carry them." 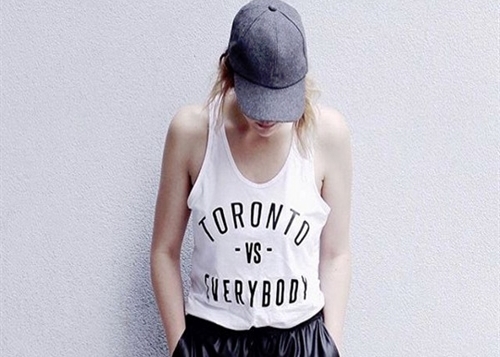 This image is at the Toronto firm's Instagram page.

Earlier this month, Walker was honored by Crain's Detroit Business as one of its "40 Under 40" notables. At the start of 2015, Eminem recorded "Detroit vs Everybody" and features Walker's styles in his music video of the song.

Walker, a native Detroiter, is a Cass Tech High School graduate. Rapper Big Sean, a schoolmate, is among his brand's supporters.

In a Deadline Detroit interview the day after Henderson's TV appearance two years ago, Walker told John Irwin about the shirt slogan's origin:

Traveling around the country, Walker said he has seen a lack of respect or even some contempt for the Motor City, even as he saw other cities taking cues from the city's style and culture.

"You can't deny the contributions Detroit has made to the country, to the world," he said. "You have to respect Detroit, even if you hate Detroit. That's what it's about."

In Tuesday's conversation with this site, he spoke emotionally about the brash, prideful slogan at the core of his first business: "It's like a battle cry, the soul of the city."

Fittingly, Tommey Walker Jr. vows to keep battling in its defense. "Be sure you put in that I said they're scumbags," he stresses.