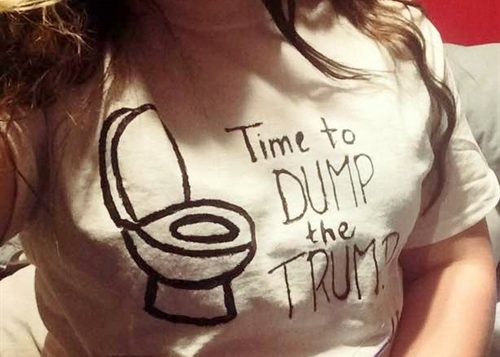 Number 3 in our countdown of most-viewed 2016 articles was published March 7. Links to earlier Top 10 entries are at the end.

Her Facebook post (below) about getting kicked out has been shared more than 217,000 times in three days from her page.

Update: The March 4 social media post wound up being shared by over 313,000 people.

In addition to showing the provocative shirt, her page now also has a 20-second video by Claire-Marie Brisson of Dearborn that shows two police officers and three security aides escorting the Garden City teen and a friend to the door. The clip has been seen more than 248,000 times since Saturday afternoon.

The 18-year-old writer, a 2015 graduate of Garden City High School, attends the University of Michgan-Dearborn. After attending a campaign rally Friday morning at the Macomb Community Expo Center, she posted this on her Facebook page. It's lightly edited for style.

I'm going to share my experience at Donald Trump's rally in Warren today. We'll start with why I went.

I am a firm believer in being educated on all candidates, not just the one you're rooting for, so Stephanie [Suboch] and I decided to attend. If you know me, it's no surprise that I am not a fan of Trump. But I try to keep an open mind, understanding that people have different views and everyone is entitled to their own. 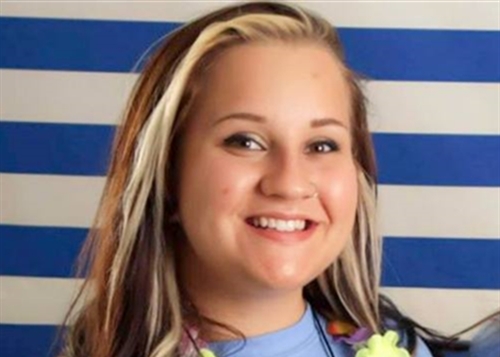 Lauren Underwood: "Of course we couldn't be kicked out -- we were just standing here silently. Wrong."

I wore a shirt bashing Trump [photo below] and Stephanie wore a pro-Bernie Sanders baseball hat. We had no intentions of causing a scene, starting any fights or speaking negatively towards any Trump-supporters. We stood in the crowd with everyone else, even made small talk with a few different people -- asking back and forth about each other's views. A women supporting Trump even complimented our hat and shirt.

This is not a post to bash all Trump-supporters. Most of the people we spoke to were very kind to us, as we were to them. Trump came out and started his speech. As hard as it was, we ignored the screams and chants about building walls and exporting citizens. We stood quietly and listened to the man speak.

Every 15 or minutes or so, a scene would happen where the crowd would yell about protestors and Trump would scream: "Get them out, send them out of here!" The crowd would scream "USA, USA, USA" until the attendees who were asked to leave were escorted out.

About 45 minutes to an hour into his speech, a group of teenage boys (who had been harassing us the entire time while we ignored their comments) screamed and pointed at us, yelling for us to be kicked out. At first we laughed it off. Of course we couldn't be kicked out -- we were just standing here silently. Wrong.

A [security staff] member and a police officer were there within the minute, grabbed Stephanie and me by our arms, and started to lead us out. One of the Trump supporters we were chatting with even stood up for us, explaining that we weren't doing anything and weren't being disruptive. By now the crowd was doing their USA chant and a large portion was also booing us out.

The walk through the crowd was very upsetting, being screamed at and filmed. One man even said: "Go to China if you like communism so much!" (Communism? Don't you mean democratic socialism?) 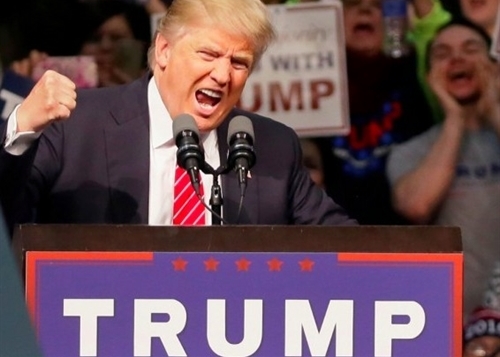 But along the walk out, some attendees would high-five us or shake our hands, and thank us for coming and supporting Bernie. It felt weird to be thanked, due to us not doing anything besides standing quietly.

As the two men walked us out, one explained that if we returned we would be arrested. Stephanie quickly asked why that was. The man replied: "They don't want you here." She said: "Isn't it a constitutional right to silently protest?" The officer replied "Not here."

The rude remarks and yells didn't stop at the door. Trump supporters who didn't get in greeted us with just as much hatred.

The walk back to my truck even included a man yelling from his car about how this was for Trump people and that we didn't belong here and shouldn't have come.

This kind of hatred is what is ruining this country. To think that my right to protest was taken from me at a rally scares the hell out of me. If Trump actually became president and got that power, what else would he take away from us if he can't even stand two teenage girls standing silently at a free, public, open-to-everyone event?

If you're thinking of voting Trump this year, please rethink your stance. This much hate belongs nowhere near the presidency.

5. Gil Hill Praised as ‘A True_Supporter_of_the_City.’_’Always_Encouraging’