Michigan Avenue at 14th Street, looking east toward downtown. The CPA Building is at left and Roosevelt Park is on the right. (Regional Transit Authority illustrations)

This vision for Michigan Avenue comes from the new Regional Transit Authority (RTA), which is developing concepts for Bus Rapid Transit, protected bike lanes and other improvements on three Detroit routes.

The preview of ideas for Southwest Detroit is posted by Human Scale Studio, a year-old Detroit consultancy. firm.

The concept renderings were done in collaboration with the RTA, Parsons Brinckerhoff Engineering Services and AECOM.

The transit authority — a state-created board with 10 members representing Detroit, Wayne, Macomb, Oakland and Washtenaw — expects to issue a master plan by summer as the kickoff of a November millage campaign in the four counties.

Here's part of what Chad Rochkind, founder and chief executive of Human Scale Studio, posts on its Facebook page with the concept rendering:

This image represents the consensus of Corktown residents and small business desires -- extended sidewalk, protected bike lane and center-running Bus Rapid Transit. . . .This is the official plan being pushed forward at the state and regional levels. . . .

This makes voting for the RTA all the more important in November. It's about more than just voting for Bus Rapid Transit, it's also about voting for a more bikable and walkable region.

The task now shifts from reimagination of the street to staging it properly. There is no reason we have to wait for BRT to come online for us to get extended sidewalks and a protected bike-lane. If BRT won't happen on Michigan Avenue for a decade, then we can still have nice things in the interim. We need to make that clear to the powers that be. 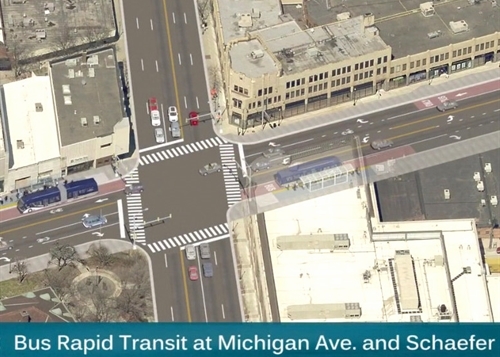 Rapid transit buses use separated lanes reserved for them and can load at center median stops, as illustrated. Tickets are pre-purchased from dispensers, freeing the operator from time-consuming fare collection at each stop.

According to a Michigan Avenue Corridor community presentation last October by the RTA, route proposals go from downtown to Ann Arbor or to Detroit Metro Airport. Stations are envisioned every half-mile to mile. Service frequency would be every 10 minutes during peak commuting hours and every 15 minutes at other times.

A Reddit discussion about the renderings and the RTA, approached four dozen comments in the first six hours. A sampling: 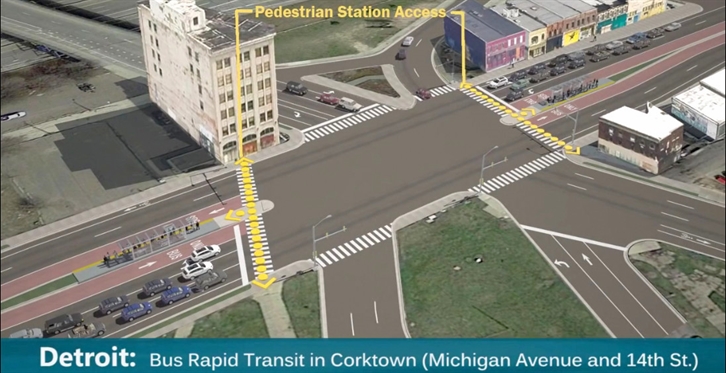