Nothing comes close to Flint's water debacle as Michigan's most important news story of 2015 and beyond, so it's natural that two statewide Journalist of the Year awards each recognize exemplary reporting on that topic.

The latest honoree is Ron Fonger of The Flint Journal, who has done hundreds of stories since the city's April 2014 switch to the Flint River for drinking water. He accepted the top award from the Detroit chapter of the Society of Professional Journalists at a Tuesday night banquet. 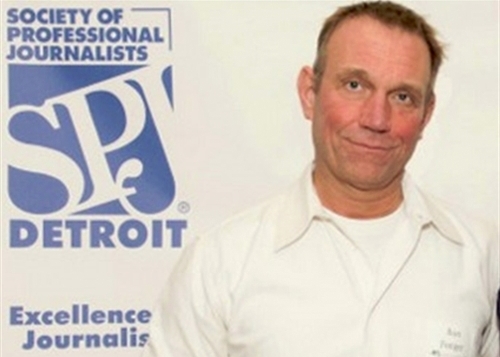 Ron Fonger: "This is a crucial story to the people of Flint, and I am proud to have helped cover it with many of the best journalists in Michigan."
(SPJ photos by Eileen Harned)

Fonger's dogged reporting broke news on health problems with the water system well before the story mushroomed into an international story after the discovery of elevated lead levels in childrens' blood.

Despite initial pushback from authorities on the issue, Fonger kept his focus and continued unbiased reporting, focusing on the issue at hand. . . .

Fonger, 51, who is a Flint native and began as a reporter at The Flint Journal in 1995, said it was an honor to be recognized for such an important story. . . . "This is a crucial story to the people of Flint, and I am proud to have helped to cover it with many of the best journalists in Michigan, especially those I work with here every day."

Three months ago, the Michigan Press Association gave its Journalist of the Year award to Curt Guyette, an investigative reporter for the state's American Civil Liberties Union chapter. (Our coverage is here.)

Below are some of the local first-place winners honored during Tuesday's dinner ceremony at the San Marino Club in Troy. 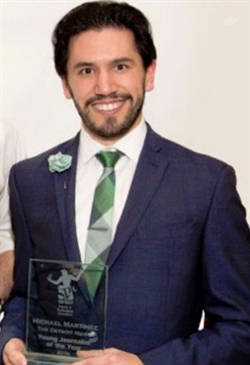 Michael Martinez of The Detroit News is Young Journalist of the Year.

Individual awards were presented in categories by type of medium and circulation level. (Information is from media listed. The Detroit Free Press did not post its winners yet.)

► Spot or Breaking News: Sherri Welch of Crain's Detroit Businbess for a report on Focus: Hope suspending enrollment in some programs.

► Radio documentary: Lindsey Smith of Michigan Public Radio for “Not Safe to Drink,” a 50-minute overview last December of Flint's water crisis. (She was a Journalist of the Year finalist.)