A Business Co-Owner's Attention-Grabbing Outcry: 'Why I Hate Detroit'

Eric Thomas, a 28-year-old Detroit graphic designer and branding agency partner, knows how to grab attention – and not just with vivid images.

He posts a LinkedIn essay Monday that opens with three provocative words: "I hate Detroit."

It's his hook for a realistic look at crime, struggling schools, media incomes, opportunity gaps and other challenges for "the poorest big city in the U.S."

Hurdles for small businesses owners like himself are among the issues Thomas addresses before telling what aspect of Detroit he loves and why he stays.

The 2008 Henry Ford Community College graduate is a senior partner at Saga, a year-old marketing agency in the Beal Building on Gratiot Avenue downtown. He and  co-founder Marcus Burrell, 29, are honored this week in an annual "20 In Their 20s" Crain's Detroit Business tribute to young executives on the rise. 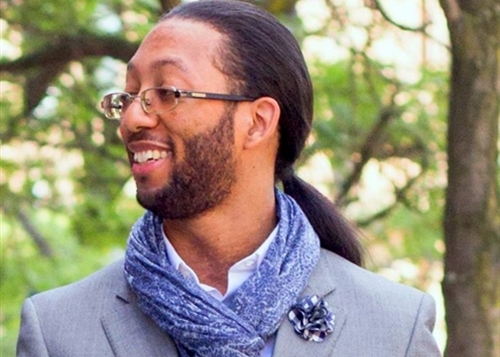 Eric Thomas: "I hate the place, but I love the people. I want to be a catalyst for growth and a beacon of opportunity for the next generation."
(Photo by Nailah Ali)

Here's what Thomas posts about starting and growing an enterprise in Detroit:

With so many resources around entrepreneurship, the interest in starting a business is higher than ever. Unfortunately, the quest for customers remains exactly the same. With so few funds being stretched thin to take care of families, there is much less disposable income for patronizing local businesses.

And what’s more important that patronization? Re-patronization. Even if there are initial buzz and excitement around an opening, continuing to support a business becomes more than a typical Detroit family can afford to maintain.

Most of the really successful businesses that we meet located in Detroit service the surrounding areas. There are of course outliers, like Kuzzos. But one or two successes do not indicate fertile soil, simply more resilient than average plants.

This achiever's impassioned post, which has been viewed more than 22,000 times since going up Monday morning, is particularly vivid as he recalls childhood and adolescence on the west side near Joy and Greenfield roads:

I grew up in one of the most dangerous areas in America. . . . I have been nearly robbed, had friends shot — some fatally, others not — and had very unfortunate experiences with the police.

Worse, my stories aren’t only common, they’re typical. Par for the course. This is a city so unappealing, that even the police make sure to continue to lobby so they can live outside of the city.

If the people sworn to protect and serve don’t want their kids here, what hope do the rest of us have?

And yet, the plucky entrepreneur remains here -- building a business, a career, a life in his native city.

So, why do I stay? Because I love the people.

I hate the place, but I love the people.

I want to be a catalyst for growth and a beacon of opportunity for the next generation of Detroit-born leaders that need to know that there’s a better way.

When people say they love Detroit, I think they’re talking about the land mass. How else could you explain moving into a city and opening shops with price points too high for the residents to consume? Or transplanting large enterprises and only hiring Detroiters as security guards to keep your old employees safe.

To come downtown, only attend a Tigers game and claim you love the city seems disingenuous to me.

How can people talk about Detroit grit, and not hire the people that made it gritty and survived?

How can you cover up and prosecute graffiti artists and then import street artists from around the world to create a “local authentic feel?"

The 7.2 square miles often discussed is only 5% of the 142 miles that comprise Detroit. To say you love 5% of Detroit is like ordering a hamburger, eating the sesame seeds on the bun, and claiming you love hamburgers. No sir, you like sesame seeds.

You love the Tigers. You love four miles of Woodward. But Detroit is not what you love.

I am a product of Detroit, and I’ve seen first-hand how bright and resilient the people are. There are diamonds littered throughout the landscape, and I’m not talking about historic homes. I’m talking about brilliant youth and passionate grassroots activists that have been doing the best they can with what they’ve been given.

If we're going to start talking about development, let's talk about human capital. Let’s stop doing the chic thing and pretending we “love Detroit” and develop the Detroit that matters -- the people.