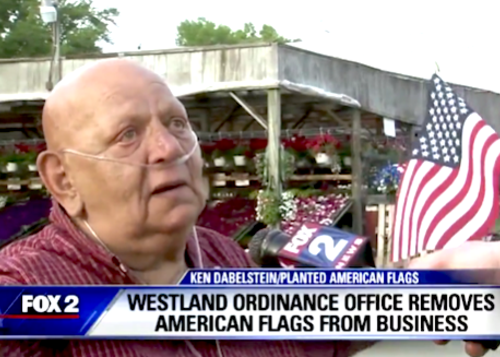 Update: Friday, 6:30 p.m. --  After confiscating the flags from  Ken's Country Produce in Westland on Thursday, an apologetic Westland government returned the flags on Friday, WXYZ reports.

On top of that, WXYZ reports that the community was so outraged, people started dropping off American flags as a sign of support.

Sometimes government folks take ordinances a little too far. In this case, it really reaches the level of the absurd.

But Thursday afternoon, Dabelstein says a woman who said she was with the city of Westland pulled each flag and confiscated them as signs displayed in violation of a city ordinance.

The merchant posts on Facebook: "The city of Westland removed my flags from my property -- saying it's signage."

A city council member came by to apologize on behalf of the council and told Fox 2 it was likely a misunderstanding.

Mayor William Wild says on Facebook:" I agree. I'll see if we can get them back."

The banners are expected to wave proudly again Friday on Ford Road at Newburg.