A neat-fit side announcement is made at a media briefing by Crain's Communication about its third annual Detroit Homecoming event next month.

Ron Fournier, an award-winning journalist and Detroit native, has been appointed associate publisher for the business publication and website. 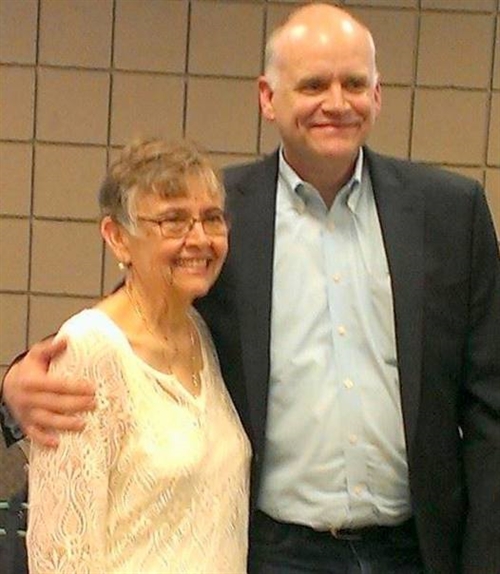 Ron Fournier with his mother Florence at a St. Clair Shores book-signing party she hosted in April for "Love That Boy." (Facebook photo)

The veteran of Washington, D.C. coverage, who turned 53 last month, grew up on Coram Street on Detroit's east side and left the city in 1985. A 27-year-old daughter, Holly Fournier Flickinger, is a Detroit News reporter.

Fournier, a 1985 University of Detroit Mercy graduate, is relocating from Arlington, Va., with his wife Lori and their son Tyler. The recent high school graduate is the subject of "Love That Boy," a 2016 memoir published that became a New York Times best-seller in the parenthood and family category. Lori Fournier, also a native Detroiter, is a fellow UDM alumnus.

Here's more of what Crain's posts about its six-foot-three new hire:

Before joining Atlantic Media, Fournier was Washington bureau chief for The Associated Press and spent 20 years with the wire service.

The lifelong journalist posts his own piece, naturally, about the career step. At The Atlantic, he writes:

I’ve had a great ride in Washington. . . .But now it’s time to start anew where I started out—to move back to Detroit, the place my wife, Lori, and I never stopped calling home. . . .

I’m proud of my work in Washington. But the action is at the local level, where innovation isn’t a talking point; it’s a way of life. . . . The real news in Detroit is revival and reinvention, and we’d like to be a small part of it. . . .

For the first time in my lifetime, my hometown has a chance to rebound from decades of decline.

The incoming associate publisher is the son of a Detroit motorcycle police officer, Ronald E. Fournier, who died at age 74 in March 2014.

Prominent well-wishers are among those tweeting reactions:

Bravo, Ron! Good for you. Good for Detroit. Good for Crain's. And good for the soul. I miss it more than I can say. https://t.co/aZLpl28gg2

Welcome back to Michigan @ron_fournier – we’re glad to have you home. https://t.co/gC202P5z7C

@ron_fournier - so happy to have you coming home. You'll make @crainsdetroit even better. https://t.co/gRrTX8DC83

nice to hear @ronfournier thought this was coming. You've been saying more nice things about Detroit for a while. https://t.co/u2UGbA7aRB