A three-year-old wellnesss salon will expand from a one-room Midtown site to a storefront studio in Corktown, thanks to a $50,000 boost from the sixth annual Hatch Detroit contest for entrepreneurs. 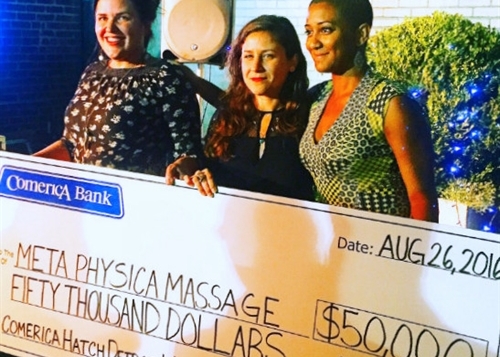 After the field of entrants was narrowed to 10 semifinalists this month, a week of public voting online and at traveling booths determined the four startup businesses in the final round.

She also plans meditation classes and community workshops at a site in the Bagley-Trumbull area with two massage rooms.

"Our goal is to help the community grow by creating a gathering place for people to take charge of their health and wellness," the founder says in her Hatch pitch. "This will offset the day-to-day stresses people endure while living within a rapidly transitioning city. . . . Massage, saunas, raw juice and meditation have many proven health benefits and can enhance the overall quality of life. . . .

"In order to expand we have secured a loan through the Michigan Women’s Micro Fund, won a grant through Motor City Match and will be using personal savings. The 50K grant from Hatch Detroit will assist in making our dream a reality!"

Hatch was founded in 2011 by Nick Gorga, an attorney at Honigman downtown.