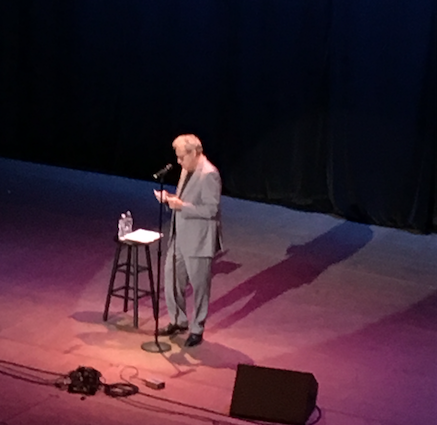 Comic Lewis Black was performing Friday night at the Michigan Theater on Liberty Street in Ann Arbor, predictably delivering his biting political satire and doing a little Donald Trump bashing. He also gave it to other candidates was well, including Hillary Clinton, Ben Carson, Ted Cruz and Marco Rubio.

But at one point he said if you vote for Donald Trump "you're going to go to hell."

That apparently didn't sit so well with some senior citizens in attendance even though they should have known better having come to a Lewis Black concert. The comic has made it clear during TV appearances that he's not a big Trump guy.

A lady sitting in the front section near the stage, yelled out: "Shame on you," and made reference to the "going to hell" remark.

Black walked over to her side of the stage to get closer,  hoping to engage in a dialogue, but it eventually resulted in her calling Black a "piece of shit."

A burly man she was with, who Black assumed was her husband, stood up and acted as if he wanted to jump on stage and teach Black a lesson or two. Some security-type folks surfaced, but nothing happened.

The man and woman then stormed out. Another man, a minute later, also yelled something at Black and left as well.

Black seemed a bit surprised, but turned it all into some laughs before he went on to do some Hillary Clinton bashing.

He told the audience that he had made similar remarks about voting for Trump and going to hell in other parts of the country, and was surprised that of all places, he got grief in Ann Arbor, the liberal college town.