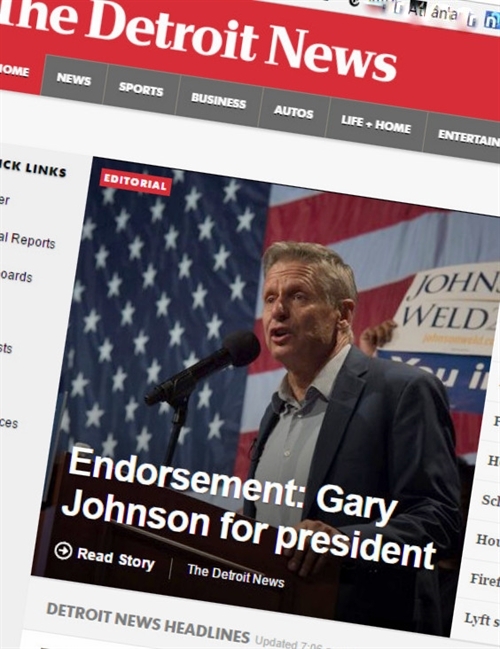 Unquestionably, this has been one of the more unusual presidential elections in modern history, with both the Republican and Democratic nominees having very high unlikability rating.

So, to be honest, after reading The Detroit News, which certainly has a conservative editorial page, I thought it was likely the News would simply endorse neither candidate.

Instead, the editorial page, led by Nolan Finley, announced Thursday morning that it was endorsing the Libertarian candidate Gary Johnson.

Some may see this as the equivalent, or just a step short, of endorsing no one considering Johnson has no chance of winning in November.

Today this newspaper does something it has never done in its 143-year history: endorse someone other than the Republican candidate in a presidential contest.

Since its founding in 1873, The Detroit News has backed a Republican every time it has made a presidential endorsement (three times we have sat on the sidelines — twice during the Franklin Roosevelt elections and in the 2004 Bush/Kerry contest).

We abandon that long and estimable tradition this year for one reason: Donald J. Trump.

The 2016 nominee offered by the Republican Party rubs hard against the editorial board’s values as conservatives and Americans. Donald Trump is unprincipled, unstable and quite possibly dangerous. He can not be president.

His Democratic opponent, Hillary Clinton, has an impressive resume and a presidential bearing. And although we disagree with her nearly across the board on the issues, we acknowledge she has the temperament to be commander-in-chief and leader of both a diverse nation and the free world.

But character matters. Her career-long struggles with honesty and ethics and calculating, self-serving approach to politics trouble us deeply.

So we find ourselves in the same position as a vast number of voters in looking for an option other than skipping the presidential portion of the ballot.

Gary Johnson meets that need. We recognize the Libertarian candidate is the longest of long shots with an electorate that has been conditioned to believe only Republicans and Democrats can win major offices.

But this is an endorsement of conscience, reflecting our confidence that Johnson would be a competent and capable president and an honorable one.