Each newsroom staff will shrink in coming months. (Twitter photo by Karen Dybis)

Dustin Walsh of Crain's Detroit Business, who broke the earlier shrinkage news, follows up with the latest:

The Detroit Free Press is offering buyouts to targeted members of its editorial staff. . . .

The paper needs to lay off 17 in its editorial department to shore up its 2017 budget, Crain's has learned. The Freep is seeking to cut 13 percent of its editorial staff, including four assistant editors, three reporters, three copy editors, four web staff, two photographers and one page designer, sources confirmed. . . .

Volunteers in the newspaper's union will receive two weeks of severance for every year of service, up to 40 weeks, management told staff Thursday. The volunteers have 30 days to notify management before it begins layoffs.

At The News, volunteers wanting to leave have just until next Tuesday to step forward. 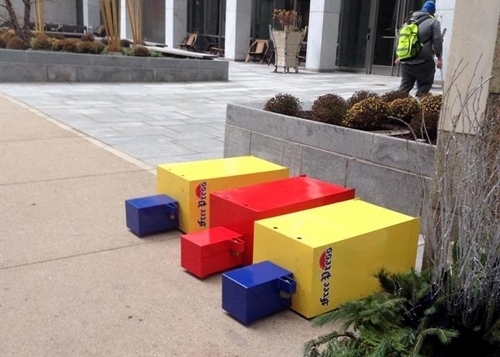 A stark new sign of troubled financial times for newspapers is reported by Dustin Walsh at Crain's Detroit Business:

The Detroit News is offering a buyout to all of its editorial employees in an attempt to meet its 2017 budget requirement, Managing Editor Gary Miles confirmed to Crain's on Tuesday.

In a memo obtained by Crain's sent Tuesday on behalf of Editor and Publisher Jonathan Wolman, buyouts are offered to everyone in the newsroom regardless of age and duties. It's unknown how many need to volunteer to take a buyout to meet the budget goal. Without enough volunteers, the newspaper likely would have to begin layoffs.

Volunteers would receive one week of severance pay for every six months of employment, with a maximum of 26 weeks of pay, according to the memo, which was sent to 80 people.

Recipients have until Nov. 22, two days before Thanksgiving, to decide whether to stay or go.

The offer went to all management-level editors and Detroit Newspaper Guild union members, Deadline Detroit learned, although Wolman and Miles can avoid a severe talent drain by declining to allow selected departures.

The top editors will hit their budget-cutting target if a certain number of people accept, and the offer then wont apply to others any longer. If the goal isn't reached, layoffs of lowest-seniority union members -- and perhaps editors -- would follow.

The unknown numbers involved add pressure to act quickly for those near retirement age, with interest in a career change or with a desire to relocate.

The 143-year-old newspaper's latest paid circulation figures are 97,514 weekdays and 83,960 for Saturday editions, according to  Alliance for Audited Media data listed by Editor & Publisher, a trade site.

The Free Press hasn't yet extended buyout offers or imposed any layoffs this year, but that's possible as early as this week because it also grapples with financial realities and a tighter 2017 budget.

"Big cuts" even are expected at The Wall Street Journal, add Joe Pompeo of Politico. "The latest internal memos have included phrases like 'challenging times,' 'not immune to the market forces that are significantly impacting traditional print advertising' and '“a series of cost-management initiatives.”

A blog post this week by Anna Clark, a Detroit freelancer and author, refers to "the dismemberment of robust local news outlets across huge swaths of the country in the past five to ten years."

Here in Detroit, The News' last group departures came 11 months ago, when newsroom veterans took buyouts. "Thirteen of our most experienced and accomplished journalists will leave us for new adventures at the end of next week as a part of incentivized retirements," Wolman and Miles said in a staff email last Dec. 18.