Selweski: The Ugly Truth About a Series of Sinkhole Disasters in Macomb County 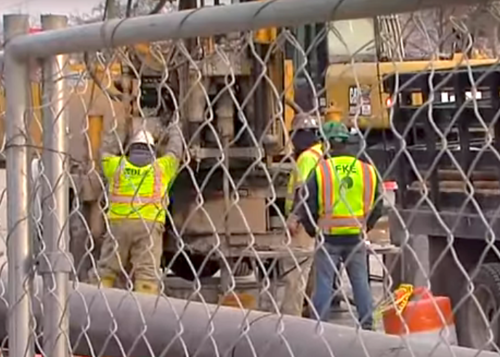 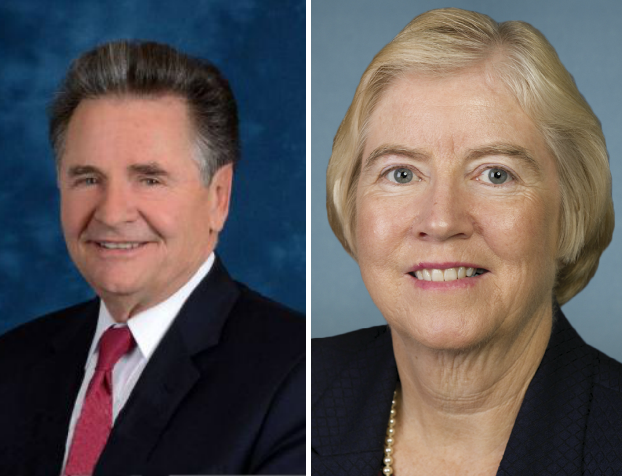 The sewer line has collapsed four times over 38 years.

Each break marks another milestone in a blundering government project that reflects badly on the Detroit Water and Sewerage Department (DWSD), and more recently, on the Macomb County Public Works Office. That office had long been run by Commissioner Tony Marrocco, unseated by voters in November.

Negligence abounds over five decades, based on a Deadline Detroit review of nearly 1,000 pages of court documents and an interview with a construction supervisor on the previous 15 Mile sinkhole, a massive sewer repair project in 2004-05.

Repeated attempts to fix, maintain and upgrade the three-mile sewer pipe located in Fraser, Clinton Township and Sterling Heights -- and a connecting interceptor -- have only led to a series of disasters. Poor construction, faulty design and a lack of maintenance have played a role in the long-term history of the sewer interceptor, which was supposed to last 100 years.

Marrocco’s November election loss to former Congresswoman Candice Miller leaves his successor with a messy start in the county office that oversees sewers, drains and sewage retention basins. Worse yet, Marrocco has refused to participate in a transition period, leaving Miller without any contact with the outgoing staff, and forcing Fraser Mayor Joe Nichols to rely upon the commissioner-elect to weave a way out of this mess.

Marrocco, who has reportedly retreated to Florida, has yet to offer comment on the Christmas Eve sewer break to any media outlet.  Miller held a press conference at the site on Sunday, the Harrison Township Republican’s first day on the job.

Miller and her appointed deputy commissioner, former Sterling Heights finance director Brian Baker, have expressed frustration with their predecessors. Baker has told reporters that the Marrocco administration’s behavior represents an “unconscionable” lack of cooperation and is likely a case of post-election “sour grapes.”

As a result, Miller begins her reign as public works commissioner (drain commissioner) anew, with several major issues on her plate and no assistance from the outgoing administration of 24 years. So far, 22 houses have been evacuated indefinitely and a few of those houses may be demolished. The sewer rupture was caused by a 100-feet wide, 250-feet long void underground. A state of emergency was declared and work crews diverted raw sewage into the nearby Clinton River. The broken pipe is 11 feet in diameter, large enough to drive a semi truck through.

Officials last week estimated the repair project would take 10 months but that is only a rough guesstimate considering engineers on site still have not been able to conduct a detailed inspection of the sewer.

The 15 Mile Road sewer essentially represents a fork in the road to provide a meandering 22-mile pipeline, known as the Oakland-Macomb Interceptor (OMI), which provides sewer service to more than 850,000 suburbanites in 25 Macomb and Oakland County communities. The OMI also includes a pipe going south through the area of high-tension power lines in the Edison Corridor (now known as the ITC Corridor) to Detroit.

To understand the long history of failure to provide reliable sewer service in Macomb County, here are a few of the basics: the 15 Mile sewer and it’s tributary in the Edison corridor previously collapsed three times, in 1978, 1980 and 2004, all within a 1-mile area. Each of these three collapses was massive; legal disputes have abounded in the past three decades, with Detroit Water and Sewerage Department (DWSD) blamed for the sinkholes, and Macomb complaining that Detroit overcharged for the $53 million worth of repairs in 2004.

In time, Macomb and Oakland counties joined together to buy the OMI sewer network from Detroit in 2009, including the 15 Mile line, in order to engage in a $170 million rehab of the system. In 2011 the story took another twist when Marrocco and the OMI team sued Detroit, claiming that the 2004 repairs (and the 2009 purchase of the OMI) cost far too much and were linked to corruption and kickbacks involving then-Detroit Mayor Kwame Kilpatrick and his cronies. That case became part of the Detroit bankruptcy proceedings.

Amidst all of this complex legal and governmental machinations, it becomes fairly clear in hindsight that DWSD built a faulty sewer, failed to maintain it, then sold it for an extraordinarily low price of $90 million to the suburbs, which also failed to inspect and maintain it.

In a 2007 ruling where he declared Macomb was not overcharged for the 2004 sinkhole repairs, U.S. District Court Judge John Feikens said that Macomb Public Works was significantly at fault for the lack of prior maintenance on the pipes. Marrocco's department was given opportunities to request detailed inspections of the 15 Mile sewer interceptor, but took no such action.

At the time, despite the two prior collapses and reports that had found numerous faulty construction/design issues, Marrocco declined to take advantage of previous court orders that required Detroit to periodically offer inspections. At one meeting where these matters were discussed, Marrocco failed to send a representative.

“In short, Macomb County had repeated opportunities in 2001 and again in 2004 to request a physical inspection of the linterceptor, or a more thorough review of a change in maintenance of that interceptor. At each and every opportunity, it chose not to do so,” Feikens said in his March 2007 ruling.

In August of 2004, after the 15 Mile cave-in closed the roadway indefinitely, the construction supervisor recalled that the exposed soil was so weak that sheets of steel had to be driven into the ground more than 100 feet deep to stabilize the situation and stop the sinkhole from growing. The construction crews then had to build a concrete bridge in the hole and lay the new pipe on top of it to ensure that it wouldn’t collapse again in the future.

Though in 2004, this marked the third collapse, the supervisor said the only effort to shore up the deteriorating sewer in the surrounding area was to fill pipe cracks with pressurized grout in the section to the west – where the '78 and '80 collapses occurred.

Tom Stockel, the only Marrocco administration official to speak publicly since the current sinkhole erupted, has said that minor maintenance was conducted on the 15 Mile line in 2010. It was scheduled for another inspection in 2019.

Marrocco seemed to show disinterest in the details of maintaining and buying the system, which might be little more understandable if he had no knowledge of the construction business. But that's not the case. Court records indicate that he owned several property development companies before and long after taking office in 1992. surrounding the purchase of the Detroit sewers.

Here is a sample of what court documents reveal:

*Marrocco, in a 2014 court deposition, showed that he had relatively little knowledge of the 2004-05 reconstruction work or the players involved at the repair site. The Clinton Township Democrat was mostly concerned about costs and the amount of time it was taking.

*Marrocco said in the deposition he was at the site many, many times in 2004-05. Other court testimony favorable to Macomb suggested that Marrocco’s chief deputy and one of his inspectors, Stockel, were on the scene routinely, if not daily. But the construction supervisor said that, by order of DWSD, no one from Macomb was allowed inside the actual construction site. They were kept to the periphery.

*The mounds of litigation revealed that two engineering firms who worked on the ’78 and ’80 collapses said they believed the entire interceptor was compromised because of poor soil conditions. A recommendation for annual inspections was ignored.

*In the 2004 disaster, the initial attempt to plug the broken pipe was so difficult that divers sent into the sinkhole could not deal with the flow of sewage and groundwater. As the sinkhole area continued to grow, the work crew had to drop 4,000 bags of powdered cement into the hole and wait for it to solidify and stabilize the situation.

*After the ’80 collapse, the U.S Environmental Protection Agency and the Army Corps of Engineers were brought in to study the sewer and found numerous weaknesses with its construction and design. The underground path of the sewer consisted of an old, glacial lake bed, so the soil was mostly silt and sand. Soil borings should have alerted DWSD to that concern prior to initial construction.

Similar difficult conditions may resurface in the coming months as the newest infrastructure collapse, located nearly a stone’s throw from the 1978 and 2004 cave-ins, will require a complex project likely costing tens of millions of dollars.

The unmistakable irony here is that, in political circles from Capitol Hill to the Macomb County seat in Mount Clemens, Miller faced widespread disbelief when she decided in March to quit Congress and run for county drain commissioner. The county job was viewed by many as an outback, a post devoid of political intrigue or popular policies compared to Congress. In other words, a sleepy place where Miller would fade away into a world of semi-retirement.

Instead, Miller won the election only after fending off Marrocco in the most expensive race for a county office in Michigan history. The campaign was expected to be about improving and replacing outdated infrastructure, but instead it turned into an ugly standoff punctuated by months of personal attacks on both sides.

Barely mentioned in that election contest was the history of problems on the 15 Mile line or the emergency sewer repairs that began in May in Lenox Township. Property on 26 Mile at I-94 in Lenox has shifted and faulty construction of the sewer, which was a county Public Works project completed just nine years ago, is evident, according to the township. The area around the repair trenches is rife with potential danger – a natural gas line, electrical towers and a water main.

The township says the county owes the contractor, Ric-Man of Sterling Heights, $1.5 million for repair work. Marrocco has said the sewer was transferred to Lenox three years ago. Their sewer is their problem.

Resolving the matter, plus many other matters, has now been dropped into Miller’s lap. Beyond overseeing extensive repairs of the 15 Mile sinkhole, who knows what other problems lurk below the surface for the new public works boss?

“I’m not going to leave this to my successor,” said Miller, promising a long-term fix all along 15 Mile. “My successor, 10 years from now, is not going to be standing here saying, ‘My God, we’ve got another sinkhole.’”