'A Comeback City:' Detroit Is on New York Times List of Places to See in 2017 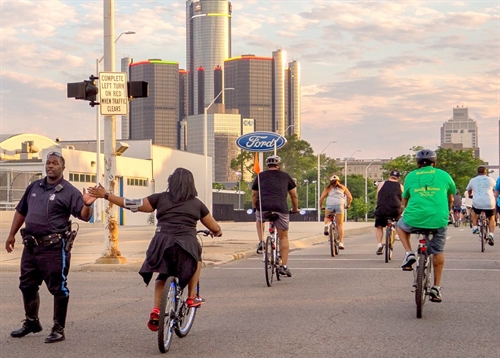 In its annual recommendations of 52 places to visit in 2017, The New York Times travel section starts with Canada (yes, anywhere), followed by Chile's Atacama Desert. And not to far lower in the Top 10 is our favorite "comeback city." in the Number 9 spot. (The list is in no particular order.)

A comeback city set to make good on its promise.

Detroit’s revitalization, after its 2013 bankruptcy filing, has long been building. In 2015, it was named a Unesco City of Design. But 2017 may be the year promise becomes reality.

The new QLine streetcar is expected to open in April, connecting the central Woodward Avenue corridor some 3.3 miles between downtown and the revived New Center area. It passes through Midtown, home to the Detroit Institute of Arts, and the entertainment-focused District Detroit, where a stadium opening this fall will be shared by the Detroit Red Wings and, in a return from the suburbs, the Detroit Pistons.

A photo of the DIA's iconic "Detroit Industry" murals by Diego Rivera illustrates the blurb, which has a Facebook link to "things to do in Detroit" suggestions from readers.