Video: '12th and Clairmount' Documentary About 1967 Detroit Premieres Next Month

If you were there 50 summers ago, the smells, sounds and fear surely remain vivid. If you followed that Juy's events from elsewhere, or years later, this new documentary will introduce a ground-level view experienced by Detroiters with Kodak Super 8 and and 16-millimeter cameras.

The Free Press sets the stage for a riot anniversary project it's part of:

A new documentary about Detroit's tumultuous summer of 1967 will make its world premiere at the opening night of Freep Film Festival on March 30 [at the Fillmore Theatre].

Home movie footage donated by metro Detroiters provides the spine of "12th and Clairmount," which looks back at the Detroit riot of 1967 — and its causes and aftermath. 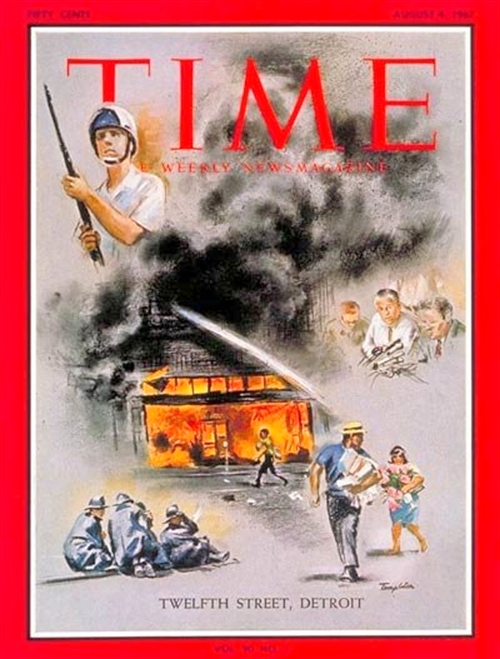 More than 400 reels of vintage home movies, loaned by residents or their descendants, are edited into a historic narrative by the Free Press, Bridge Magazine and WXYZ. The Detroit Institute of Arts and other cultural institutions support the project.

The film "weaves together a phenomenal story about what Detroit was like then -- for black, white, east side, west side, what have you," Freep editorial page director Stephen Henderson posts Monday afternoon on Facebook.

"Important lessons from this film include one that binds our fears and fortunes about this city and its history. And just as critical: knowing the difference between peace and order, and what those concepts mean to people across the racial and economic spectrum," adds Henderson, who'll moderate a panel discussion after the premiere.

The title refers to the near west-side intersection where the riot was sparked July 23, 1967. In addition to amateur footage, the film has archival interviews and new conversations with witnesses to the five days of violence that changed Detroit to this day.