One is a 40-year-old New York author and influential African American voice. The other is a 63-year-old historian who lives in Livonia and teaches at the University of Detroit Mercy.

They're united by a shared interest and developed a friendship that brings best-selling writer Ta-Nehisi Coates to speak at Professor Roy Eugene Finkenbine's campus Tuesday night. (Tickets are here for $10.) 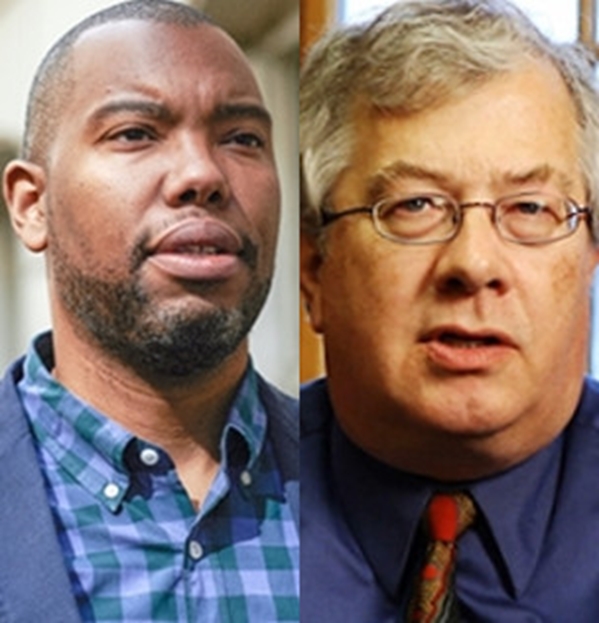 The Detroit educator is co-chair of UDM's history department and director of its Black Abolitionist Archive, which made him a research contact when Coates was developing a June 2014 cover article for The Atlantic titled “The Case for Reparations.” In an article at the university's site, Dave Pemberton describes how "Finkenbine received a call out of the blue from author and journalist Ta-Nehisi Coates."

Finkenbine provided Coates with some of his research on reparations, which Coates referenced in his article. The article would go on to receive worldwide attention and what started with a phone call from Coates to Finkenbine developed into a friendship between the two.

Today, Coates is talked about as one of the most original thinkers on race in America.

His’ 2015 book, "Between the World and Me," earned him the 2015 National Book Award for nonfiction. He was also the recipient of a “genius rgant” from the MacArthur Foundation and last year was named one of Time magazine’s “100 Most Influential People.”

The friendship between Finkenbine and Coates also helped Detroit Mercy land Coates for a speaking engagement on April 4 at Calihan Hall. Coates will deliver a talk titled “Between the World and Me” at 6:30 p.m.

The local professor, who joined UDM's faculty in 1996, teaches African American and 19th-century American history. He's a specialist on slavery, abolition, the Civil War, and the Underground Railroad, his campus bio says.

He has deeply researched an elderly ex-slave's successful petition to Massachusetts legislators in 1783 for an annual pension to be paid from the estate of her former owner, an enemy of the Revolution who had fled to England in 1775. Fishburne published his findings in 2007 in a scholarly journal, which led to the call from Coates -- whose first name is pronounced Tah-Nuh-hah-see. 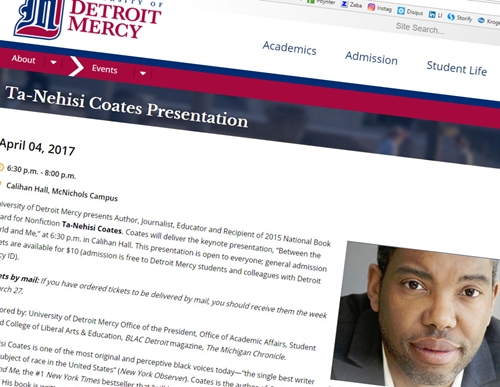 “He did say he felt, which I was willing to take advantage of, he felt some sense of obligation and wanted to come here,” Finkenbine said. “So I talked to him about ways we could make that happen. …

"He did, and I’m very proud of that, he did think my work was enough of a contributing factor to the middle part of his essay on the case for reparations, that he wanted to come and speak here. I wasn’t going to let that go.”

Unsurprisingly, the historian is among Coates' many admirers. “He is able to say in provocative ways a lot of things people in the African-American community are thinking," Finkenbine says in the recent article promoting this week's event.

"[He discusses] issues about race that a lot of people in the broader American community are at least contemplating,” Finkenbine said. “Race has been at the forefront of a lot of our concerns and problems. . . . There’s a lot of conflict, a lot of division, a lot of disagreement. He’s a guy that can speak boldly to that, speak provocatively to that [and] does it in such a way that he brings his personal and community experiences into it.

“Quite frankly, he’s in a long tradition of black intellectuals and activists who have said what needs to be said."