'Screw It:' Ford Assembly Plant Shifts Are Dramatized on Detroit Stage This Weekend

This April 16 article is reposted on the eve of the play's Detroit debut. Tickets are available.

Tim Campos, a playwright-actor raised in Southwest Detroit and now living near Chicago, comes home for three performances of a play dramatizing his nine years on Ford assembly lines.

In a one-hour storytelling sprint from orientation through his last day as an auto worker, he portrays about 50 characters -- including supervisors, union reps, security guards and a line leader who wants the new hires to bring her doughnuts. 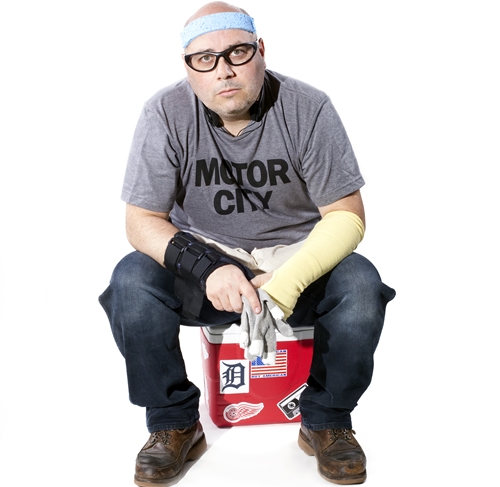 Tim Campos: "The experiences are all true."
(Photo by Juan Fernandez)

"Screw It: Doin' Time on the Line" premiered last fall in Ann Arbor and was staged four months ago in Chicago. It's at the downtown YMCA's Marlene Boll Theatre on Friday night, Saturday night and Sunday afternoon.

The autobiographical show is "a no-holds-barred adventure [that] shares his intimate portrait of factory life," a promotional blurb says. Campos, now 46, was in his late 20s when he became a second-generation auto worker -- following his dad and uncles onto the line after graduating from Aquinas High School in Southgate and seeking an entertainment industry niche on the West Coast.

The actor punched in at Ford factories in Saline and Chicago, he told freelance writer John Monaghan for a Detroit Free Press preview of his drama's Ann Arbor debut last October. Excerpts:

Much of the play recounts Campos' efforts to overcome the monotony of the job, which at first involved installing metal frames into dashboards.

“When I’m asked what factory work is like, I always say that what I did for the first 40 seconds of the shift is exactly what I did during the last 40 seconds,” he says. “You end up saying you’re not going back, but then you’re up the next morning, figuring out a better angle to insert that steel. I call it figuring out the dance with the line." . . .

"I always knew that working in the plant had the potential to be a show, with all the diverse characters and the tension of working on the line. ... Many of the characters in the show are a combination of two or three different people, but the experiences are all true." . . .

Campos says that he kept the assembly-line job for the same reasons a lot of people do: stability, a steady paycheck, and health benefits. He finally left Ford in 2007 as part of an educational buyout program and now splits his time in the theater with his job as manager of the Catherine Edelman Gallery in downtown Chicago.

Campos gets a chance to show his creativity at the center of America's theater universe in October, when he'll present "Screw It" on a Times Square stage in New York for one night during an annual United Solo Threatre Festival.