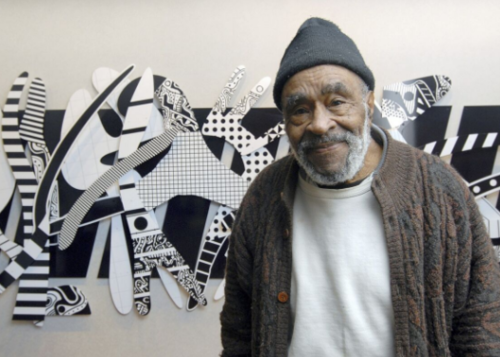 Beginning this week, his new 11-story, 118-foot-by-50-foot mural titled "Unity" will be installed in downtown Detroit at the 28Grand building at 28 W. Grand River in downtown Detroit's Capitol Park. The project is being funded by Bedrock Detroit and Library Street Collective, a downtown gallery.

McGee’s 70-year career has focused on the black experience and a love of nature. He hopes the new mural will allow him to reach new audiences.

He was born in 1924 and has lived in Detroit since the age of 10, according to a press release. His public projects include works at Beaumont Hospital in Royal Oak and the Detroit People Mover Broadway Station.

McGee's works are on permanent display at the Detroit Institute of the Arts and the Charles H. Wright Museum of African American History. Nationally, his work has been shown at the Brooklyn Museum and Whitney Museum of American Art and in touring exhibitions under the umbrellas of the Smithsonian and Corcoran Gallery of Art of Washington. He is a founder of the Contemporary Art Institute of Detroit.

The Library Street Collective will also celebrate McGee with "Still Searching," an exhibit from June 1-July 1 at 1505 Woodward Ave. in Detroit.