'Music Humanizes All of Us' -- Debbie Stabenow, Our Senator the Pianist

We didn't know Michigan's senior senator belts out Carole King classics at home and performed in East Lansing bars decades ago as half of an act named Dale and Debbie.

Those tidbits and other surprises are in a New York Times feature about "Hobbies of Capitol Hill."

Debbie Stabenow, shown at a piano keyboard, is among seven senators pictured during off-hours. Others' hobbies include beekeeping, baking, photography and teaching pilates. 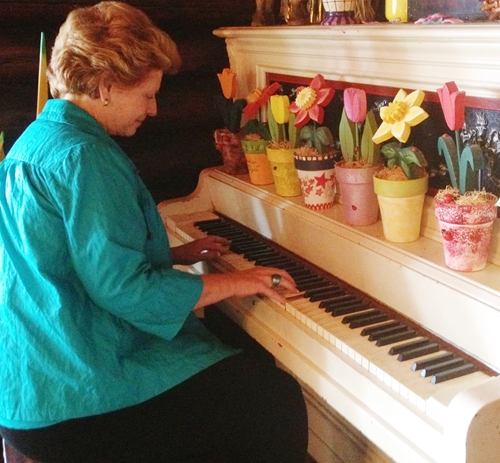 The senator at Mt. Shasta Restaurant in Michigamme in the U.P. (Facebook photo, 2013)

"The senator hails from a musical family," writes Jennifer Steinhauer of the paper's Washington bureau. "Her father had a swing band and taught her at an early age to play boogie-woogie."

Childhood music lessons paid off in college in the 1970s at Michigan State University, when she would alternate between the piano and guitar during bar gigs as part of the duo Dale and Debbie. It beat waitressing, but when Dale bowed out, Debbie found playing alone in the bar as a young woman a tad too “interesting.”

These days, she plays her baby grand at home in Lansing whenever possible, and can still belt out some Carole King. . . .

Stabenow got a bipartisan Christmas carol singalong rocking [in 2014]. “It was fun . . . and it really brought people together,” she said. “That’s what music is for me. It crosses party lines. It humanizes all of us.” . . . She has also teamed with Senator Tim Kaine, the Virginia Democrat and harmonica player, at lawmaker retreats.