So what do Detroit traditionalists and heritage huggers know anyhow?

Those who jeer this week's update of the Detroit Free Press nameplate at its website and mobile app react differently than focus group participants who see similar changes at eight Gannett dailies, the chain says. 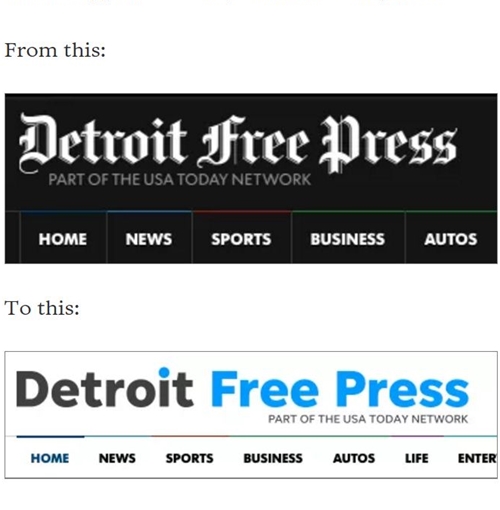 Work aimed at visually uniting the 110 news organizations across the network will continue through the year. The changes will also roll out in print, where the mastheads won't change but the fonts will.

[Chief marketing officer Andy] Yost said the response to the changes so far has been good.

"Focus groups of readers have shown a unanimous positive response to the new typeface," he said. "The reaction from the markets so far has been very positive and employees at these markets are very excited to see the changes."

The switch from legacy nameplates, typically in old-style typefaces, to a sleeker one with some blue characters is aimed at showing a unified chain identity, explains Poynter writer Kristen Hare, whose beat is "local news innovation."

In the next several months, all of the local news organizations in the USA Today Network will follow, said Yost via email.

"When we launched the USA Today Network in late 2015, all of our brands came together as one unified network," he said. "With this, we have the opportunity to bring that change to life visually."

Hare also quotes Steve Dorsey, who was at the Freep from 1999-2013 as a deputy managing editor and then vice-president. He's now vice president of innovation and planning at the Austin American-Statesman in Texas and tells Poynter:

"The typography of a newspaper is its DNA. Everything else changes every single day: the photos change, the words, but that typography is the one thing that's unique to that publication. . . .

"The more you take out that local flavor, the more challenging it is to uniquely connect with an audience," he said.

It's a small step for newspaper chain consistency and a giant leap away from cherished tradition.

The Detroit Free Press changes its online edition nameplate Wednesday without fanfare, or apparently even a heads-up to staff members. In place of the iconic Old English font seen for generations, web readers now see stark, modern typography and a blue circle that reflects the paper's place in the USA Today Network owned by Gannett Co., Inc.

The legacy version remains atop print edition front pages, at least for now. An Old English "F" remains in social media logos and on the mobile app, though the device version now sits atop the parent's company's blue circle (below right).

Though the online break with part of a 186-year-heritage is purely cosmetic, it stirs emotions by reflecting more than a font switch.

It's an in-our-face reminder that a Virginia-based media chain determines what Michigan readers see in our local paper, including how its name is presented. It's also a fresh sign of an industry grappling to keep its audience, and ideally enlarge it, as it struggles for revenue, relevance and survival. 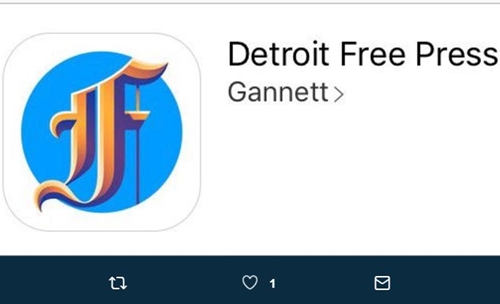 Online identity and appeal are vital, obviously. Typography from our ancestors' eras isn't the best way to reach millennials, marketing executives may believe.

Familiarity, longevity and heritage still matter, even in the 21st Century's second decade and even among young generations of news site readers. Social media comments, though hardly a representative cross-section of reader reactions, show disapproval and disappointment.

Voice from the newsroom

The Detroit Free Press did not make this decision. Our owners did. And believe me, many of us Freepers prefer our Old English font.

"This is dumb. New Coke deja vu," Ed Seward of Southfield posts elsewhere on the social site. "Let's hasten our decline, shall we?"

"This nagging rain shower today is is the Brand Gods weeping," quips Charlie Wolburg, founding partner of Curve | Detroit, a Pontiac advertising and design agency, in a comment on this writer's Facebook page

Insiders are among those caught by surprise. "I didn't even know about this," posts a Freep photographer who has been there 18 years and says he'll miss "a distinguished and elegant font with personality."

"Change is hard," a colleague comments on his thread.

Amid the mini-outcry, Detroit author Aaron Foley suggests that critics curb their unenthusiasm and keep perspective. 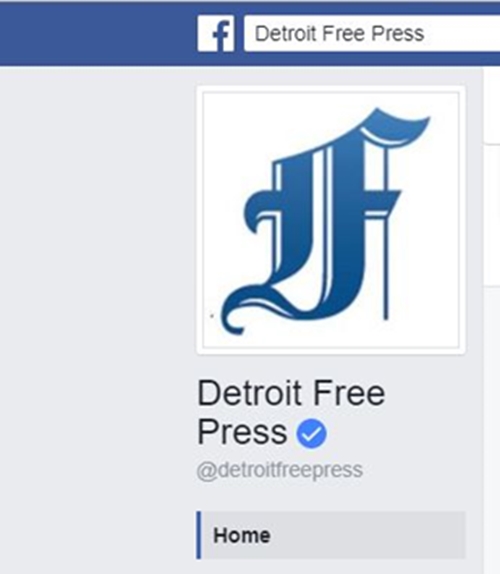 "A newspaper's logo changed, so I guess we should burn down the building and never read newspapers again," he posts. "Everyone will forget about this before the weekend."

Responses to Foley include this by Judith Salyer, who gives us an OK to quote her by name:

Your version of reaction is extreme. However, for some of us who cherish decades upon decades of history of the written word in Detroit, it's sad. The local media means a lot to me. I stuck with them through good and bad times, since the 1950s. I am disappointed at the ugly choice.

Maybe a person has to be my age to understand the value of local history and the written word.

These are among other early reactions. (Those from Facebook are shared without names because they're not necessarily posted for publication.)

Ugh. Replacing an iconic brand with one that's best known for cluttering up hotel hallways.

► "The creative brief must have read: Our brand is unique and storied, we'd would like to be more relatable and generic. The ideal logo should blend into the landscape and be instantly forgettable. Oh and can you make it blue, we like blue."

► "Someone missed the lesson about the importance of branding."

That font was our history

► "Huh? Oh noooo! What's happening to my Freep? That's how we know the paper -- the distinguished font style. It conjures professionalism. Now it looks like the USA Today font

► "Dumbest thing, like somehow it's going to entice readers and gain circulation."

► "Jettisoning the past with the present."

You don't screw around with branding and history like this. What a stupid move by Gannett. https://t.co/tsdsRw5ats

► "They really should undo this change. The Free Press' masthead is a Detroit icon. It frustrates me that money was spent on rebranding that I would much rather go to a journalist."

► "Huh? Oh noooo! What's happening to my Freep? That's how we know the paper -- the distinguished font style. It conjures professionalism. Now it looks like the USA Today font."