1967 Riot: I Was a Skinny White Kid, 11, Living in a Mostly Black Neighborhood 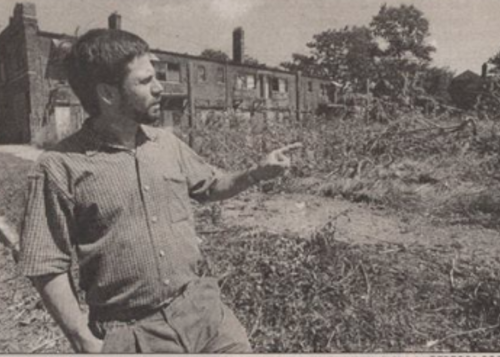 Mike McBride in 1997 points to empty field where his house once stood.

A lifelong Detroiter  and east-sider wrote this in 1997 for the Detroit Sunday Journal strike paper while on strike at The Detroit News. He reposts it on Facebook this week to share "my unique perspective of the '67 rebellion/riot as a young white kid in a black neighborhood that was the east side epicenter of the '66 disturbance and that of '67." It's reposted with permission.

It was the sharp, crisp crack of a gun that I will never forget.

A stocky black man lay on the street, clutching a broken bottle of vodka that he had taken from the Tiger Cats liquor store around the corner on Kercheval. The vodka was quickly emptying onto the asphalt. Blood began soaking the side of his shirt and spilling onto the black pavement beneath his body.

He moaned in agony. Cried for God. Then half-rolled his body, side-to-side like a boat in a storm, wailing for help.

“Oh, God,” I heard him scream as though pleading on the doorsteps of heaven for salvation and forgiveness. “Lord, please help me.”

At the corner of the street, about 100 feet away, stood a policeman holding a rifle like a hunter. He was a white man, flanked by several other white cops, all of whom where holding pistols or rifles and staring at the man lying on the street as if he were a fresh kill.

The whole world seemed to stop for a moment that day. Everyone stared at the black man on the pavement. Is he going to die? What did he do? Why was he shot? Would anyone else get shot?

It was horribly hot that day.

I was a skinny, 11-year-old white kid living in a mostly black neighborhood. My mother, two sisters, baby brother and I lived in the attic apartment of a Victorian fire trap. A step-father stayed there occasionally.

On this day, a Tuesday, I was sitting on the floor near a front window, staring out over the street and rooftops when I heard the shot. It was the third straight day I had watched from inside, and I was bored. I just wanted it all to end soon so I could go out and play ball in the alley or climb the apple tree down the street.

I had been trapped indoors, watching the riot from the oven-like third floor of this old house. Day and night, with little sleep, I would traipse from one room to the next to get a better view. It was like channel surfing with the remote; each window was like a different television station.

From the kitchen window, I watched neighbors in the apartment building, no more than 100 feet away, carry on a intense gun battle with a police helicopter and cops on the street. From the back bedroom, I could see people cramming looted goods in every nook and cranny of their garages.

The front room window was the best. I could sit for hours and watch people running up and down the street looting all the stores along Kercheval. The lucky ones stole shopping carts out of the A&P and ran back and forth from the store as if they were playing that TV game show, “Supermarket Sweepstakes.”

It was a cat-and-mouse game between the neighbors and the police. The stores would fill up with nonpaying customers, and minutes later the police roar in like the cavalry and everyone would run for daylight.

This went on time and again without incident—until that shot rang out.

The man’s moans had softened. The police had him surrounded, pointing their guns as though he were about to jump up in a miraculous recovery and escape. Instead, his blood continued to form a large pool next to the puddle of vodka.

Breezes during that sweltering week where few and far between. I remember, though, that what few there were carried the rich odor of burning paint and oil from the hardware store three blocks away. Or, maybe the smell came from the smoldering pine-board floors of the dime store next door? I wasn’t sure and couldn’t judge from the various plumes of black smoke dotting the skyline. I often would pass time tying to figure out what was burning and where.

So it went during those hot July days. At times, I was terrified that someone would set the house on fire and I that I would be killed along with my family. I feared that gunshots could be fired through the windows at any moment, yet I was not afraid to sit there and watch for them.

The night before, a group of people from another block had tried to break in. They wanted to burn the house down because white people lived there, I could hear them say.

“No you ain’t,” the neighbors said, “those are good white people there and you can take your ass on back to your street.” A crowd gathered. A struggle ensued and the group from the other block left.

We didn’t step out of the house until that Friday. The black woman next door asked my mother if everything was OK. Then she wanted to know if we needed anything. Said she had just cooked a bunch of greens and corn bread and we were welcomed to it.

I sat staring at the scene on the street that day.

I did not understand why a man could be killed over a bottle of vodka. A bunch of places had been set on fire and no one was killed over that. People firing guns at the police weren’t killed. Others, who pulled cars up to stores and filled them to the breaking point, they weren’t killed.

This man was shot, I figured, because he was old and slow. If he could run as fast as I could, he would have gotten away. Everybody else did.

The cops looked over the man on the street and forced the broken bottle out of his clutch. They had called for more police and a car to take the victim away. As  they prepared to drag him off the street, an officer with a rifle looked up at the window and saw me. He stared at me for the briefest moment and then raised the gun barrel on a line with my eyes.

"You," he yelled for the whole block to hear. "You in that window. Get away before you end up like him. Get away now!"

He moved his head closer to the rifle to line up his shot. I dropped to the floor with my heart beating. I gasped for a breath and began to sweat. He was going to shoot me, I said to myself. I’m just a kid. Why would he want to shot me?

I lay there on the floor. All my thoughts were of being shot. Of being killed. Of missing my mother, my sisters and brother. Of not being able to play ball again.

My innocence was shattered that day. I realized how fragile and precious life is.

Maturity, Understanding and Respect for Life

About a half-hour passed before I slipped up to another window with a view of the street. I peeked over the ledge and down to the spot where the man had lain. He was gone. So were the cops.

A group of people had ventured to that spot. They were talking and shaking their heads. I could not hear what they were saying, but I could tell they too did not understand why he was shot.

The blood on the road had turned dark red. A finger of it moved toward the vodka.

As the day wore on, more people came out of their houses. The cat-and-mouse game resumed. I went over to the kitchen window to see what was happening at the apartment building and then to the back to see if anything was happening in the alley.

I never found out who that man was, or if he died.

I did, however, find a little more maturity, understanding and respect for life that day.