The film "Detroit," a story about the Detroit 1967 riot, is gut-wrenching, painful, searing, compelling. It opens old wounds.

It begins with the raid on the infamous blind pig at 12th Street and Clairmount. I felt a chill as I watched at a media screening Sunday night at the Bel Air Luxury Cinema in Detroit.

Just hours earlier I was at 12th and Clairmount for celebration honoring a new park there and a state historic marker. The police chief, the mayor, Congressman John Conyers (played in the film by Laz Alonso) all talked about the brutal, oppressive police force back in 1967 and how things had changed. It was eerie standing at that infamous intersection on July 23, the 50th anniversary of the riot. 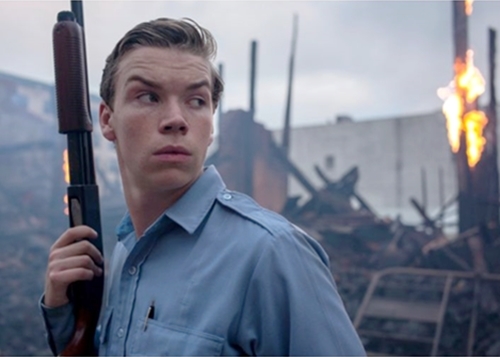 Will Poulter as Krauss, a racist cop who leads interrogations at the Algiers Motel annex. (Annapurna Pictures photo)

In junior high I would drive by there with my father on Sunday afternoons on the way home from helping clean up his bar at Grand River and 14th Street, which was about 2 1/2 miles away. We were down at the bar that Sunday morning and early afternoon.  Instead of going home by way of 12th Street, we took the Lodge Freeway home that day. After we left, the bar was looted and vandalized. It opened a month later.

For many years after, I read details about the 12th Street raid. This was first time I got a true visual, and the film brought it alive for me, pretty much the way I had envisioned, with cops being hard asses and citizens responding in anger.

The film, directed by two-time Academy Award winner Kathryn Bigelow and written by two-time Oscar winner Mark Boal, goes on to focus on another legendary slice of the riots, the murders at the annex of the Algiers Motel on Woodward Avenue near Virginia Park, which was known for its prostitution. Two nights after all hell broke loose in Detroit, Detroit Police, the Michigan National guardsmen and Michigan State Police responded to possible sniper shots in the general area of the motel.

In the film, some racist Detroit cops, led by an evil officer named Krauss, play a "death game," trying to force the occupants --black men and two white women -- to 'fess up to who shot out the window. (It was actually a starter pistol.)

Krauss, played by Will Poulter, is very very convincing as a racist, crooked cop who has no compunction about killing black people. You can’t help but hate him, then hate him some more.

The cops torture and threaten to kill occupants of the annex. They beat them, including the women. Three men end up murdered. It goes on for hours. My stomach was in knots. I wanted the people inside to escape. I wanted it to end. Director Bigelow keeps you in that building, feeling the punches, the shots, the humiliation of the victims, the pure police brutality.

Eventually, Krauss and two other cops are charged with murder. But the judge throws out the confessions of  the two other cops, ruling them inadmissible because the officers were not read their rights (Krauss never confesses). The three eventually get acquitted and fellow police officers in the court gallery congratulate them.

Bigelow gets an "A" for research. She hired a local research team headed by investigative reporter David Zeman, formerly of the Detroit Free Press and currently editor of Bridge Magazine. She also spent time talking to people from Detroit.

She also gets an "A" for capturing Detroit's flavor. Many movies and TV shows have failed to capture the city's essence. Detroit is more nuanced than most Hollywood types realize. This film hit the mark.

The movie, which runs two hours and 23 minutes, isn’t perfect.

It takes too long for some of the main characters, members of the group called the Dramatics, to make it to the motel so the Algiers scenes can begin. The group had gone there seeking refuge during the riot.

Then there's the trial for the cops. It all seems a bit  too perfunctory, a little too formulaic. It missed out on the chance for more courtroom drama and intrigue.  The other shortcoming: After the Algiers scenes, the film fails to return for a glimpse of a bigger picture of the riot.

The film is bound to stir conversation in Detroit and around the country about race and police. It revisits a painful, but compelling part of Detroit history. Some parts of the city have never recovered from the riot. Empty fields sit where homes and businesses once stood 50 years ago.

Being a Detroiter, it’s too hard for me to tell how compelling the movie will be for others around the country -- either as important history or as entertainment.

For Detroiters, I can certainly say it’s well-done and worth seeing.

An invitation-only premiere is Tuesday at the Fox Theatre. It opens Friday at the Star John R in Madison Heights and the Bel Air Luxury Cinema in Detroit, and nationwide Aug. 4. 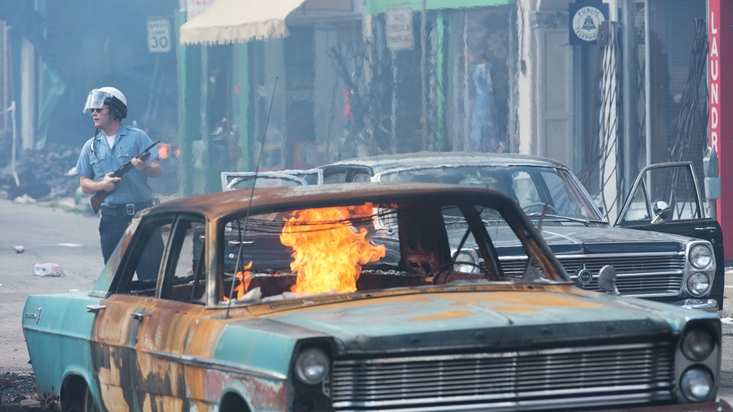 A scene from the film. (Photo by Francois Duhamel for Annapurna Pictures)