Stars of 'Detroit' Reflect on Race, Racism and Their Hopes for Film's Impact 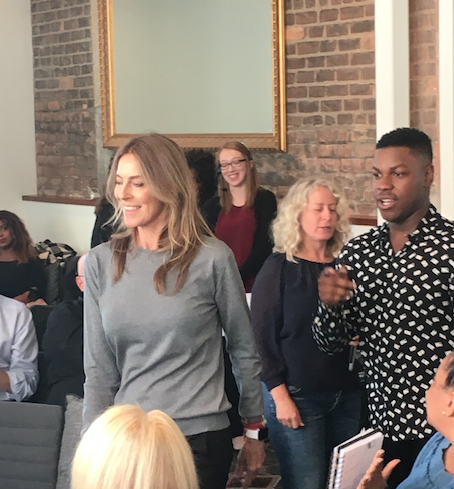 The cast and the creators of the new film "Detroit," which opens in theaters nationwide on Aug. 4, spoke to media on Monday afternoon at the Foundation Hotel in downtown Detroit. The film examines the events that unfolded at the annex of the Algiers Motel on Woodward Avenue on July 25, 1967, in the midst of the Detroit riot. Three black men were murdered there and several other men and women were beaten and tortured by police.

The group is expected to attend the invitation premiere at the Fox Theatre on Tuesday night.

Here are highlights from the conversation:

► How she chose the music: The film’s choices were really a product of the culture at the time, and also digging a little deeper than perhaps more well-known pieces, and trying to keep it intriguing but yet accurate and authentic to the period. So not every [song] is well-known. It really added to the tapestry—you can’t tell it without music.

In my opinion, that was in the DNA of the city at that time. That certainly is what motivated the characters played by Kaitlyn [Dever] and Hannah [Murray] to come to the Algiers Motel. Motown was the draw, what everybody gravitated toward.

► How she and screenwriter Mark Boal decided to portray the higher-up white policemen: There was a fair amount of research—court documents, court records, eyewitness accounts—that fed into and really informed the script. Some of the detectives [in the film] were actually in the FOIA request, so I think they’re fairly authentic.

The trial, on the other hand, that was three trials over a year and a half. We’d still be watching the movie right now if we did that.

► Being a white woman telling a black story: I certainly had a very lengthy conversation with myself. I analyzed it long and hard, and I thought, ‘Am I the right to make this film? Absolutely not. No way.’ On the other hand, this story needed to be told, and that kind of overrode any other hesitation. I thought, here I have this platform, I have this medium I’m fairly conversant in, I have this opportunity. This story needs to see the light of day. So I took advantage of that opportunity, at the same time realizing it’s a concern, it’s a challenge.

► Limits on showing the riot: The beginning is a reflection of systematic racism and how that in itself creates tension between people. When the system is rigged in a way to stop you from getting the jobs you deserve, to stop you from being the best that you can be to a large amount of people, it sparks a reaction.

Yes, the situation it started with was an unnecessary issues that sparked the riots. But instead of riots I would say uprising, because it has a different nuance and a different dynamic. The key to it is the beginning showed you a gradual burn and the disintegration of unity when a system is against you. And that’s another thing we’re trying to relate in this movie—systematic racism is very, very real. And okay, cool, it wasn’t a thrown bottle that started the riots, but the system definitely had something to do with the tension and the anger.

► Why his character didn’t use his weapon against police: To me the whole idea of him pulling out his weapon wasn’t a question that came to mind, because of the situation.

When we watch a film like this, we all like to play heroism from comfort. We’re in good clothes, we’re looking clean. We like to look at other people’s situations from comfort. What this role required me to do was have an open mind. The movie is conflicts—there are a lot of choices and decisions in there that are so natural to who we are as human beings. There are things that we do, before you’re black, before you’re anything, there are things that we do just to survive. Talking about my character, I was blessed to understand the man. Not his color, the man.

When we were shooting in that motel, we were on night shoots for a long time. It was claustrophobic, these guys were hyperventilating on the wall. There was blood.. It’s the worst trip ever. Being there, surrounded by the corpses, I’m not pulling out my weapon. Melvin [the man Boyega’s character was based on] said to me he felt his presence there as a black figure of authority was enough for the officers. 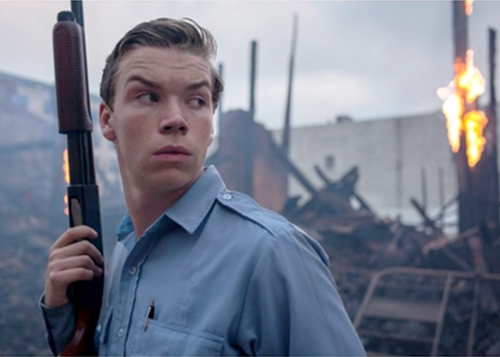 Will Poulter : "It's not acceptable to avoid the topic or race and racism."

► What cops should take away: Now, the Detroit Police Department is the most diverse police department in the country, which is phenomenal. That in itself speaks to the amazing progress that Detroit has made. The response of [Detroit] police officers to the movie has been phenomenal.

Not only were they receptive to the film, but they’re looking into the film being mandatory viewing for police officers, so it informs them about the past. That hopefully will add to the progression we’re experiencing. I don’t have the answer as to how we can ensure these sort of injustices don’t occur against the African American people. Of course when police criminality go unconvicted that is totally unacceptable. I wish I could magic that away, but the issue is complex and multi-faceted.

The first steps we can all take is to educate ourselves where we lack knowledge, understand the experiences of other people, shed light on social injustices, like the ones you see in this film, and develop empathy and compassion for ethnicity groups outside of our own.

As white people, I think that when we’re invited to participate in the conversation we absolutely have to participate, and it’s not acceptable to avoid the topic of race and racism. As long as we shy away from that we contribute to the problem. We need to recognize our part in this.

► What he would say to people who don’t want to see the film: That’s just the saddest thing. Maybe those are the people who need to see the movie. Sometimes it’s hard to get people to face things they don’t want to face. This movie is a very intense, hardcore, riveting experience. Maybe you could sell it to them by saying it’s a piece of American history that they don’t know about, and that it’s just a movie and they’ll be fine.

► How she -- a native of Bristol, England -- mastered an American accent: I was slightly inspired by Will [Poulter] who chose to stay in the accent the whole time, and I’d never done that before, personally, but I thought I’d give that a go, and it worked really well. That was Kathryn [Bigelow] who suggested it. The last thing you would want in a movie of this nature is to for the audience to be taken out of the moment by someone’s accent not being right, so I think we all had a duty to make sure that was working well. 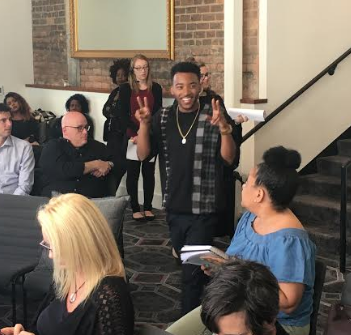 Algee Smith: "Tried to get as close as we could to tell the bigger picture."

► Limitations of portraying the riot: You have to look at what we wanted to do with two hours. If you wanted to tell this whole thing it would take a mini series. You’d have to have 10-12 episodes to tell every single detail of the riots. The whole of point of the big scale of the movie is how the injustice of it was only done to certain people. We just tried to get as close as we could to tell the bigger picture.

► Relating to his character: I don’t feel like I’m different from my character in any way. I’m a young, black man in America. I’m a singer. To be honest, that could happen to me any day I walk outside. There is no separation for me from Larry. If you look at the human being, every one of us matches up to our characters. That’s the scary part.

► How he works toward change on these issues: I’m not the person that’s out marching, and doing things like that. Not to say there’s anything wrong with it, but I’m saying this is my outlet, and this is my medium to further my culture and my people.

And so, when I have an opportunity to tell a story like this, I feel like that’s my purpose, that’s my craft and the artistry that God gave me. I feel like me marching, I can reach the people who are in this particular city, but how many people am I going to be able to reach with this film? So that means a lot to me, to be able to tell it on this level.

► Why she wanted to be involved: This film really made me think about why I loved doing acting in the first place, because I get to be a part of something so important and impactful. Doing this movie was a huge learning experience for me. This is my way of having a voice and starting a conversation.