'There Is a Misunderstanding:' Tour Guide Reacts to Outcry Over 1967 Riot Site Visits

Wariness about exploitation and voyeurism is close to the surface for good reason. Outsiders do come to gawk and photograph urban ruins, and do trespass in decaying landmarks and factories.

But sometimes a historic tour is actually an educational event, not an appropriate target for social media outrage. And it's always -- always -- best to read a full event listing before posting "This is crazy" and "I find this disgusting."

Case in point: A pair of "Detroit 67 History Tours" by bus, hosted this coming weekend by the Detroit Free Press, Bridge Magazine and the Center for Michigan. The two and a half-hour retrospectives are led by Detroit historian and educator Jamon Jordan of Black Scroll Network. 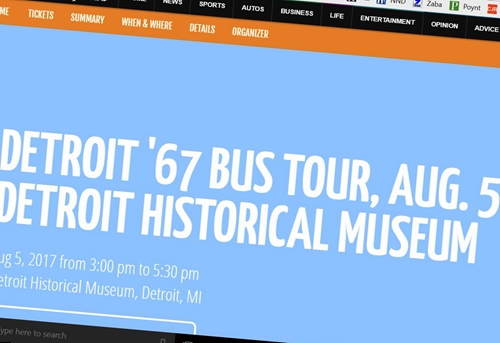 Bridge promoted the events at the start of this week with a Facebook post that starts: "Take an historical and education tour to learn about the unrest of 1967." The one-sentence item mentions Jordan and the Black Scroll agency, and links to an event listing for Sunday's 6 p.m. tour. (The other starts Saturday at 3 p.m. Each costs $10 and both leave from the Detroit Historical Museum.)

The post sparked a two-day brush fire that Jordan tried repeatedly to extinguish. "This tour is NOT slum tourism," he replies to a comment from Krystle DuPree, who posts a video using that phrase.

Nine people oppose the tours in a series of comments that start with a Monday afternoon objection by Pamela Turner of Detroit:

Having lived through the rebellion, I don't feel comfortable with the idea of taking folks to tour through our neighborhoods like something at Disney World or a zoo. I'm sure the intentions are good, but this is offensive--at least to me.

Jordan, a son of the near west-side neighborhood he'll revisit, saw the outcry Tuesday night. "It seems as if there is a misunderstanding of what happens on these tours," he posted three times in replies to particularly strong remarks. (A sampling of objections and his full response appear below.)

The tour leader head's Detroit's chapter of the Association for the Study of African American Life and History.

Some or most of those offended may not have clicked the listing link under Bridge's sentence, which says he "will lead a historical and educational tour of key sites related to the 1967 uprising and discuss the policies and practices that led to the unrest." It mentions "stops at Gordon Park, which now occupies the corner of Rosa Parks Boulevard (12th Street) and Clairmount, as well as the Birwood Wall, erected on Detroit’s Birwood Street in the 1940s to create a barrier between black and white residents."

Black Scroll Network is mentioned in the promotion, though there's no link to its Facebook page. It lists 10 tour themes and says:

If you want to a beer and bar tour, we're not that company.

If you want to learn the history of Detroit, especially its rich African American heritage, then please book a tour or join one of our public tours.

In any event, Turner and eight others sense something intrusive and inappropriate. Three people post positive comments.

Below are six reactions, followed by the tour guide's explanation and a four-and-a-half-minute video in which he discusses the riot anniversary.

► No! Are you serious? I actually cringed when I read this. Why don't you just turn it into more of a tourist attraction by having people dress up and re-enact it all, complete with faux looting and dead bodies? I lived through it and I find this disgusting. -- Carmen Enriquez

► It's dumb. Nothing is the same, nothing there that was there 50 years ago. And it . . . involved people, some who aren't around to tell their story. Please take the parade elsewhere -- Robert Arzadon

► I was thinking about those ghetto tours they used to have. And you know the folks going on the tour don't live in Detroit. -- Krystle DuPree

► Now they going too far! This ain't entertainment, this is people's neighborhood and lives. The movie "Detroit" was real life and we are still suffering the remnants of that day. If they are so interested, find some investors to build it back up. . . . Why haven't Duggan and Gilbert invested in 12th Street? They thought of us as animals then and nothing had changed. If there is a dollar to be made off the lives of blacks, please believe they gonna make it and they will exploit us to the fullest to do it -- with no conscience! -- Denetra Janee

► The people of Deroit are not in a zoo to be looked upon. Find other ways to communicate. -- Susan Hoover 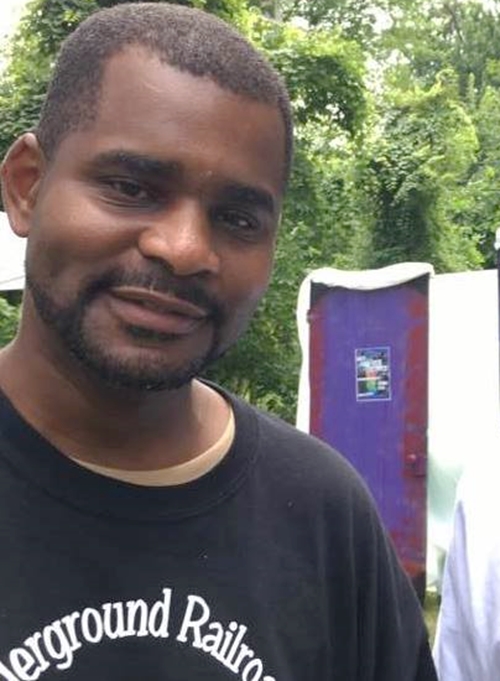 Jamon Jordan at a 1967 anniversary event last month. "There is NO way I will be leading a tour that disrespects," he says. (Facebook photo)

It seems as if there is a misunderstanding of what happens on these tours.

The tour begins NOT in the 12th street neighborhood, but in earlier African American historic sites that show the rise of the African American community from Black Bottom and Paradise Valley to fights against housing discrimination.

The focus of the tour is NOT the homes nor the blight. But we bring the tour to 12th and Clairmount, so that people can learn about the historic flashpoint of the 1967 Rebellion at the site where it all started.

There have been numerous programs there in commemoration of the 1967 Rebellion this year. Our tour will come to this site just as the other programs did.

The tour is not driving down streets and neighborhoods in the 12th Street area in order to present the residents as if they are spectacles. We are driving to a particular destination, Gordon Park, and we are going there in the same spirit as many of the historical commemorations that have occurred there this year.

In fact, I would argue that our tour to this site is much more historically relevant and respecting of the history and integrity of the people than some of the other events and appearances of numerous politicians who have appeared at the site.

This is NOT a Gilbert or Duggan tour.

A personal note: My grandmother, grandfather and my mother were living in this neighborhood. They lived on Columbus between Dexter and Grand Boulevard, as well as on Lee Place and Byron.

There is NO way I will be leading a tour that disrespects the people, the neighborhood or the history.

My tour UPHOLDS the people -- the neighborhood -- and the history.

Tickets for each day are $10 and can be bought online. (Click on either day.)