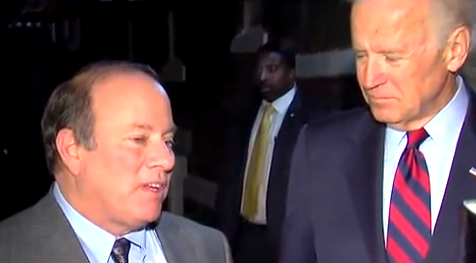 Mayor Duggan and VP Joe Biden in 2014 in Detroit.

In the call, Biden says:

Hello, this is Vice President Joe Biden. I’m calling because tomorrow is election day. Mike Duggan is a very good friend of mine. No mayor in America has done a better job for his city than Mike has done for Detroit.

As vice president, I had the opportunity to visit the city multiple times and seen the progress made under Mayor Duggan. The blight being removed; the bus system improving; the spirit of hope returning. The recovery has started, and I know Mayor Duggan won’t quit until that recovery has spread to every Detroiter.

We’ve all seen what happens in this country when people don’t vote. So vote. Please get out to polls tomorrow and support the re-election of this good man, Mike Duggan.

Duggan seeks a second term. His main challenger is state Sen. Coleman A. Young II, the son of former Mayor Coleman A. Young. Six other candidates are also on the ballot. The two top vote-getters face off Nov. 7.

A July poll put Duggan 34 percenbtage points ahead of Young, and as of July he had dramatically out-raised the state senator $1.6 million to $22,000.