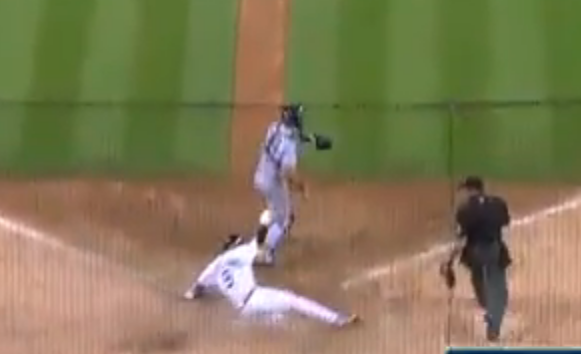 The Tigers provided a dash of excitement Tuesday night at Comerica Park in a game in which they were getting killed.

It was the bottom of the ninth inning with two outs. The Tigers were losing to the Yankees 13-3 when third baseman Nick Castellanos hit a shot to center field. Yankees outfielder Jacoby Ellsbury, trying to end the game with a shoestring grab, came too far in and missed it.

As Castellanos took off, the crowd perked up.

Castellanos sprinted to make it home in under 17 seconds, as you can see here.

The last Tiger to achieve that feat was James McCann at Minnesota's Target Field on April 25, 2015, Beck reports. Castellanos is  the first player with an inside-the-park homer in Detroit since Kansas City's Lorenzo Cain did it off Justin Verlander on Sept. 8, 2014.

It's too bad it wasn't a tie score. That would have been really exciting.