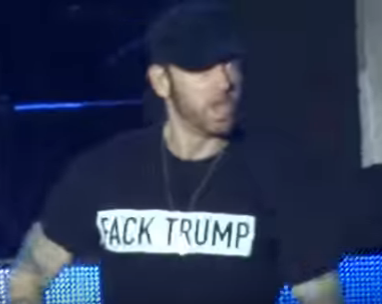 Detroit's Eminem wasn't a big fan of Donald Trump before he became president and he hasn't warmed up to him.

The  rapper blasted Trump during three festival performances in Scotland and England last week, liberally using the F-word when referring to the president, reports Eddie Fu of the website Consequence of Sound.

While wearing a "Frack Trump" T-shirt at the Bellahouston Park in Glasgow, Scotland, he told the crowd: "Scotland, you might have to be our new home because right now shit ain't going so well in the States. I just wanna take this moment out right now and say motherfuck Donald Trump."

A few days later, Eminem took the stage at the Reading Festival in UK and got 90,000 fans to chant “Fuck Trump!”

"I don't want to cause any controversy so I won't say no names but this motherfucker, Donald Trump, I can’t stand. So before we get into this next song, we would like to request something of you. When I say 'Fuck,' you say 'Trump.'"