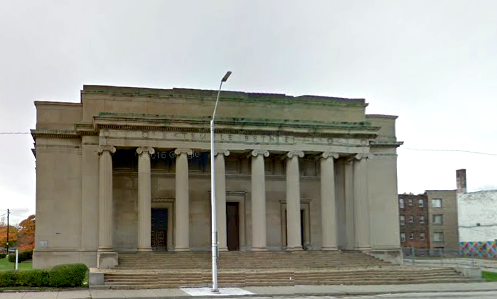 In recent years, there's a been a slow trickle of young Jewish people migrating to the city. The latest estimate is that there are between 500 and 1,000 Jews living in Detroit, and more than 100,000 in Metro Detroit.

"We've gotten to the point we think more and more Jewish people are living and working in the city and we're committed to Detroit," Vadim Avshalumov, a board member of he synagogue, tells Deadline Detroit.

In recent years, the High Holiday services were held at the Holocaust Memorial Center in Farmington Hills because there was too much demand and not enough space in the Downtown Synagogue. The synagogue also got a break on the price for the use of space in the suburbs.

But later this month, the services will be held at the former Temple Beth El Building at 8801 Woodward Ave. in Detroit, which is now the Bethel Community Transformation Center where Breakers Covenant Church International holds regular services. It will be the first time in more than 40 years that the Jewish High Holiday services will be held in that building.

Services for Rosh Hashanah, the Jewish New Year, will take place on Sept. 20-22,  and on Yom Kippur, the Day of Atonement, on Sept. 29-30. The holidays are sometimes referred to as the "Days of Awe."

“The Days of Awe are a time to reflect and return to the values that define us,” Rabbi Ariana Silverman of the Downtown Synagogue said in a statement. “Holding High Holiday services at the Bethel Community Transformation Center affirms our commitment to Detroit, allows us to partner with our neighbors, and shows our appreciation for the historic spaces in our Jewish community.”

Silverman said her synagogue’s close relationship with Pastor Aramis Hinds and Breakers Covenant Church International “is a reflection of the ongoing commitment between the Downtown Synagogue and Pastor Hinds’ church to further both a shared dedication to social justice and serving the metro Detroit community.”