'Doesn't Look Like Leadership:' Lessenberry Sees Problems for Whitmer in 2018

Political commentator Jack Lessenberry lets us see him squirm as he wrestles with shortcomings of a candidate "whose values I essentially share."

The candidate is Gretchen Whitmer, a former state senator who's "the likely Democratic nominee" for governor next year, as Lessenberry says at Michigan Radio.

His fresh squirming about her suitability involves what he describes as her decision not to file sexual assault charges against Larry Nassar, the serial abuser of female gymnasts at MSU, while she was the local county's interim prosecutor, though that concern is highly questionable considering the circumstances. 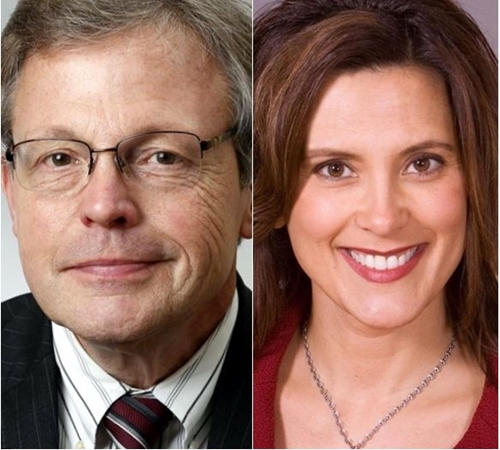 The columnist and the candidate.

"This isn’t good for Whitmer," Lessenberry says in his broadcast commentary.

Politically, she ought to have moved to charge Nassar, with considerable fanfare and a loud public commitment to keep our children safe. . . .

Some are wondering if this is a symptom of a much bigger problem for Whitmer. She has been largely reluctant to take a stand on a number of issues.

On the MSU case, Whitmer and a top Ingham County attorney in the prosecutor's office say MSU's police chief didn't deliver investigative reports that would have let them decide whether to prosecute Nassar. "My office was ready to move forward on any and all alleged crimes," she tells The Detroit News. "The MSU Police Department ultimately took the charges to the attorney general’s and U.S. attorney’s offices because of jurisdiction."

Lessenberry, who heads the journalism faculty at Wayne State and is a Metro Times columnist, lists other examples of what he sees as indecisiveness or missed opportunities:

Actually, although Whitmer didn't comment on Etue at first, she did so "in response to an inquiry from The Detroit News," telling Jonathan Oosting it was "divisive and deeply troubling" -- though she "did not elaborate when asked if she thinks Snyder should act now to remove Etue."

The candidate told the paper: "As governor, I will not accept anyone in my administration who demonstrates this level of disrespect for Michiganders, including those exercising their civil rights."

Half a year ago, Lessenberry has a more positive view of the former state Senate Democratic leader.  On Michigan Radio in June, he said:

Of all the announced Democratic candidates, Whitmer alone has spent time in both the state House and Senate. . . .

It might be interesting to have a governor who has some experience with governing. Not to mention someone in power willing to speak hard truths to the citizens they serve.

That same month in Dome, a Lansing magazine, he write a column headlined "Michigan's next governor could be Gretchen Whitmer." Citing her legislative experience theme, Lessenberry noted:

Michigan’s two most recent governors, Jennifer Granholm, and Rick Snyder, a Republican, were elected without any legislative experience, and it showed. Both floundered badly in their efforts to get their agendas approved.

Now a decidedly different view emerges. In his new commentary, the opinion journalist says this about the candidate he wants to admire more:

"This doesn’t look like leadership. We have a state with a lot of problems and discredited leaders, and I think voters are looking for someone with the guts to take bold stands."