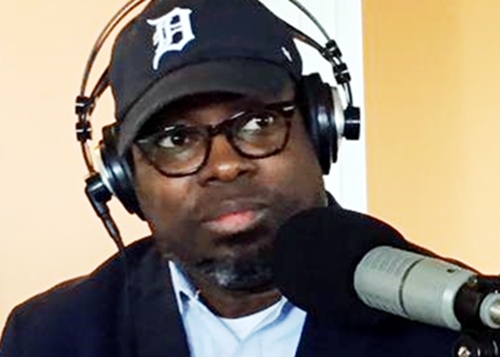 Stephen Henderson: "I have maintained professional friendships and good working relationships with both of these colleagues." (WDET photo)

Stephen Henderson clears the air about his Free Press dismissal three days ago.

"The Free Press found instances with two female employees in which my interactions, in social situations outside of work several years ago, were deemed inappropriate," says the fired editorial page editor, who'll continue hosting "Detroit Today," his daily morning radio show on WDET.

Those incidents, described in a statement below, were the only misbehavior cited at Friday's termination meeting.

Henderson is considering legal action because he feels the paper overreacted to situations in which the colleagues had not "come forward or filed a complaint before the outside allegations were made against me."

Michelle Srbinovich, general manager of WDET, appeared on Henderson's show Monday morning. The public radio station has decided to keep him on air "at this time," she said. Its inquiry to uncover any complaints or discomfort by station staffers continues.

The Freep's vague language about unspecified "inappropriate behavior" in its Friday announcement created an opening for wild assumptions. A conservative publication, The Daily Caller, suggests with a posed photo that Henderson is a breast-groper or accused of similarly vile actions. Online sniping used words such as "pervert" and "abuser of women."

Others voiced surprise and cautioned against speculation. "I want to thank everyone who has reached out in the last few days for support, empathy, critical inquiry," Henderson posts Monday morning on Facebook.

Fresh admiration is expressed after his broadcast. Detroit News editorial writer Kaitlyn Buss praises "a fair and honest statement" and adds: "The Freep lost its heart and soul by choosing to let him go."

Ingrid Jacques, deputy opinion pages editor at The News, tweets: "Good for WDET for showing some rationality in all this." Judy Diebolt, a retired News features editor, comments at our Facebook page: "If this is true, the company response seems draconian to me."

'Neither of the two women
want to take any action'

On Friday, I was terminated from my role as columnist and head of the editorial page at The Detroit Free Press. As a journalist and as the ongoing host of WDET’s Detroit Today, my most important asset is the trust that listeners, viewers and readers have in me to tell the truth.

So I want to start by telling you what happened.

The newspaper’s action on Friday was set in motion two weeks ago when a local minister claimed in a press conference that complaints about sexual harassment had been made against several Detroit media personalities, including me at the Free Press.

There were no such claims.

But the allegation prompted the newspaper to conduct its own review of my work and interactions with colleagues, a review I encouraged and supported.

I spoke candidly and openly about every potentially relevant interaction I could recall with a colleague.

The newspaper’s review of my ten years in management at the Free Press found instances with two female employees in which my interactions, in social situations outside of work several years ago, were deemed inappropriate. One situation involved sexually themed conversations with an employee; I had encouraged that employee to disclose this interaction. In the other situation, a co-worker who was a manager in another department reported two rejected advances that she said made her uncomfortable.

Neither of the co-workers involved had come forward or filed a complaint before the outside allegations were made against me. There are no other allegations. I have maintained professional friendships and good working relationships with both of these colleagues. The Free Press told me that neither of the two women want to take any action.

The newspaper and its corporate owner, Gannett,  decided to end my employment, saying my conduct violated the company’s standards. I disagree with that decision and outcome, and I am exploring legal action.

But I want to make a few things clear before we move forward. I want to apologize to the women involved. It was bad judgment, on my part, to have engaged in either situation. As a senior leader at the Free Press, I should have acted more responsibly. I also want to apologize to Free Press readers, to our listeners here at WDET, and to viewers of Detroit Public Television.

On this show, we have spent a lot of time in recent weeks talking and thinking about this critical moment where our country is more openly confronting sexual harassment and gender dynamics in the workplace and holding accountable men who have done harm. I will not shy from that conversation in any way and, as always, I will welcome your voice and thoughts in the conversation. 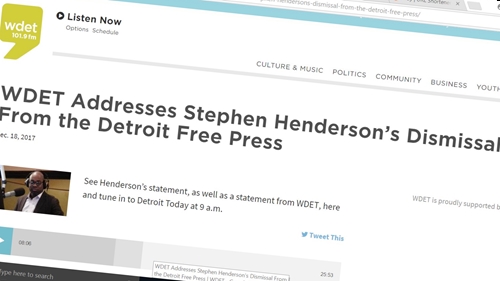 The station has 'not received any
complaints against Henderson' -- WDET

On Friday, Dec. 15, WDET was made aware of the Detroit Free Press’s decision to terminate journalist Stephen Henderson for misconduct following an internal investigation.

Based on the information currently available, WDET did not see cause to terminate Stephen Henderson’s contract at this time and we made the decision to have him return to our airwaves as the host of Detroit Today on Monday, Dec. 8.

Our leadership team has strived to create an organizational culture that is respectful and inclusive. We have proactively and repeatedly encouraged staff to review our policies regarding sexual harassment and assault, and to come forward with any claims of inappropriate behavior within the workplace.

To date, WDET and our license holder Wayne State University have not received any complaints against Henderson during his time as a contracted host.

However, given the action taken by the Free Press and our commitment to providing a safe environment for all of our employees, WDET will conduct an independent, station-wide investigation to ensure that our staff has the opportunity to share their concerns and report any incidents that require further examination. Any situation that compromises university policies will be dealt with swiftly and decisively.

As a public institution, WDET is committed to transparency. We place a high value on trust and recognize that it is only possible if we can communicate honestly and authentically, engage respectfully, and hold one another accountable. To that end, we will continue to ensure that we not only address any concerns raised by our staff but also those raised by the wider community we serve.