The writer is a former reporter for Fox 2, The New York Times and The Detroit News. He is the author of the 2014 book, "Detroit: An American Autopsy." His latest book, "SH*TSHOW," comes in May. He is contributor to Deadline Detroit. 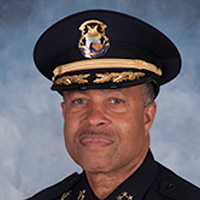 He insists he's a chief, not a chef.

"My reputation is important to me," he said of a reputation that has been battered over the past few months by the bribery conviction of his deputy chief and an ugly and very public fight with criminologists from the State Police and FBI over the accuracy of Detroit's violent crime numbers.

"I don't want people to accuse us," Craig said.

Surrounded by Mayor Mike Duggan and representatives from nearly every public safety bureaucracy operating in the Detroit area except the dog catcher, Chief Craig announced that last year's murder tally -- 267 -- was the lowest here in 50 years.

And why quibble? You can't hide a body, the old saying goes. Or at least not too many. So what if a few mummified remains may go uncounted? Or 14 homicides were not tallied because they were deemed justified? Or that Detroit's population is at a 100 year low?

The number 267-- plus or minus -- deserves some muted praise and respect for the men and women in law enforcement.

"I can't say that's good news, because it's still a lot of death," said Acting U.S. Attorney Daniel L. Lemisch. "But we are certainly trending in the right direction."

The chief went on to claim that all violent crimes -- murder, rape, robbery and assault with a deadly weapon -- continued their spiraling drop under his command, an astounding 20 percent over the past two years.

And to that effect, Craig announced nice blue ribbons would be awarded for police officers to wear on their dress blues commemorating the fact. 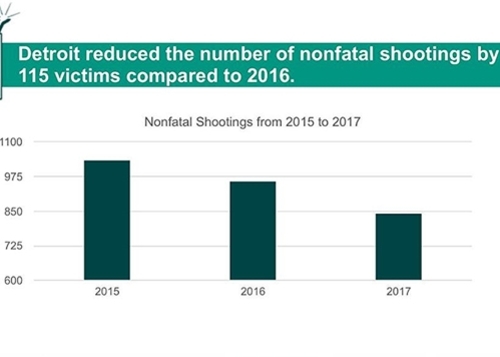 One of the crime charts released Thursday.

But that's where the facts get murky.

Over those same two years, the crime statistics have bounced around like a yo-yo. Crime was up 15 percent last year, said the FBI. The chief claimed it was down 5 percent. He gave excuses of 'computer glitches' and 'double counting.' He held a press conference with a barricaded gunman as the backdrop to repudiate the FBI's statistics that were, ironically, supplied by his own department.

Finally, Chief Craig declined to send the FBI any crime stats for the 2016 National Incident Report -- a first.

"We didn't want to put crap data out," the chief said,blaming the crap data on the glitchy, antiquated computer system. "I didn't make no sense to put out bad data. It just skews it even more."

Apparently, the police department did a hand recount of those old glitchy numbers to straighten them out. And the 2017 numbers were compiled by a new police computer system. So all good. The numbers are on the mark. Right?

Except the FBI does not believe the double-digit drop in crime for 2017, calling it unrealistic and unbelievable math.

In a national report to be released later this month, the FBI is expected to reject the city's crime data for the first six months of 2017. Another first. Detroit will get a zero. No crime at all. The safest six months on record.

Detroit is not alone. The Los Angeles Police Department was caught by the media baking and misclassifying violent crime numbers a few years ago, as was Milwaukee, New York and Dallas to make it appear as if violent crime was dropping.

Citizens should remember: Crime numbers are like rutabagas -- often overboiled and to be taken with a grain of salt. 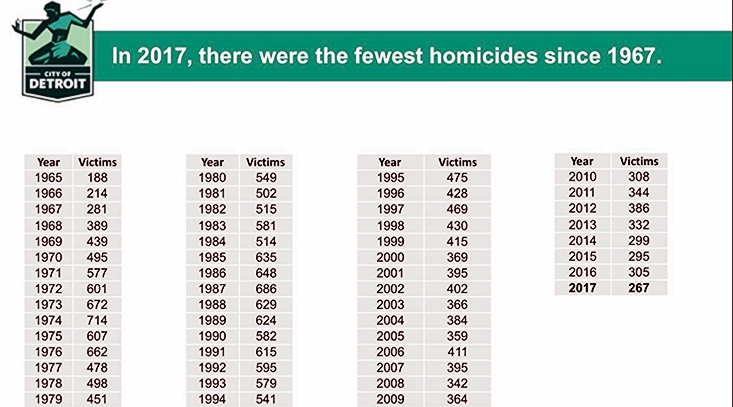