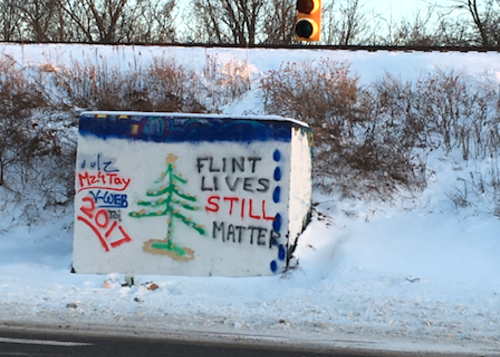 Venturing to Flint for the first time, I have to admit I set out with mixed expectations. I knew the city had a great history of pushing back against powerful forces like General Motors, the media's negative narrative and the dismal FBI crime stats that remind us yearly of  just how dangerous of a place Flint is.

The city has a fighting spirit against naysayers, doubters and sneering bourgeois elitists who look down upon it from their suburban perch.

But I also have to admit that another side of me was expecting a darker, more dismal city: burned out buildings, economic despair and a pervasive attitude of sorrow and gloom. I expected the locals to be a bit more hostile considering, for those of us who have followed the storyline, much of America has relegated the town to a relic of past industrial glory. 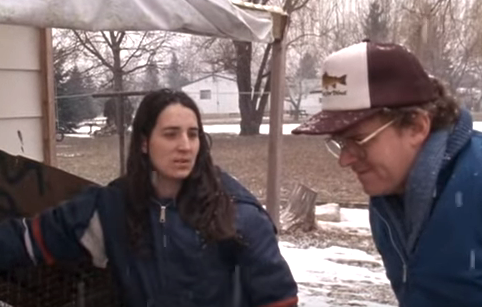 We all remember the “Rabbit Lady” from Michael Moore’s 1989 documentary "Roger & Me," a person who embodied the do-anything survivalist culture that was a bit of a shocker.

What I found instead is a remarkably innovative place with a ton of creative, smart and hopeful people that are leading the initiative to bring folks into the city, particularly downtown. Words that you can never overuse when talking about the people in Flint are "resilient" and" tough."

Water crisis, outsourcing you say? Flint counters with coffee shops, restaurants, bars and small businesses in a downtown that shows signs of hope we seldom hear about. The story of downtown Flint is often eclipsed by the steady flow of laudatory stories hailing the comeback of Detroit, about an hour south.

Driving down Saginaw Street in Downtown Flint is a throwback to yesteryear. Buildings like the Flint-Genesee County Chamber of Commerce make you feel like you you’re standing in front of the Penobscot Building in Downtown Detroit. But the city is awash with new and upcoming stores and hangout spots, which have brought a youthful vibe to parts of Flint.

The first place I stopped in was The Ferris Wheel building at 615 Saginaw St. It's a microcosm of Downtown Flint’s revitalization. It reopened in November of 2017 after years of being boarded up. The building now serves as a sort of incubator/working space for young entrepreneurs

I stopped at Fosters Coffee Co. ,which is located in the Ferris Wheel, and ordered a cup of coffee and couldn’t help but feel like I was at a coffeehouse in Corktown Detroit, with its rustic vibe and college-aged people. FlintPrints, a commercial printing store, is also located inside the Ferris Wheel. These businesses are examples of more to come.

Flint, like Detroit, has a very unique development taking place within its confines; old school sensibilities are mixing in right alongside new school progressiveness.

The old is exemplified with spots like Churchill’s, a tavern that opened up back in the ‘70s and has been a local favorite ever since, despite the hard times. You can find locals gathering there daily and engaging in sports and political banter. The bartender at Churchill’s, who declined to give me her name, told me the water crisis of 2016 did not have as much an impact on Flint as a whole as the national media made it out to be.

“The water crisis did not affect us here that much downtown, there were a lot of parts of Flint that have been doing fine the whole time and I think it was irresponsible for the media to scare people the way they did.”

I asked if she had noticed any positive change in the city since the water crisis.

“There has been new businesses popping up all over the place, Soggy Bottom pub is a great place to hang out, the Ferris Wheel has been great. Good Boy, a fashion store opened up down the street on Saginaw and we still have great music places like Locals, where people come into the city and can see live music.”

I noticed the bartender’s defiant and optimistic take in almost all of the people I talked to in Flint and it was definitely a breath of fresh air to see this attitude in a city that 15 months ago most Americans figured was on life support.

Venturing off after having a pint of Churchill’s finest, I stopped at 501 Bar and Grill on South Saginaw Street to have lunch. 501 first opened in 2009 and has been another popular business in downtown Flint ever since.

Marketia Brown and Al Johnston, both servers at the 501, are Flint natives who say the city is definitely on the comeback trail.

“People were definitely scared to come into the city after the water crisis, but there definitely has been an uptick of people in the last year or so. UM-Flint built dorms and this has brought a lot of younger people into Flint.” Brown added that Flint Farmer’s Market has been a huge staple to the local economy, and developers continue to update and renovate buildings downtown, turning some into lofts.

Both Johnston and Brown told me that although the water crisis did scare people away from the city it also brought people in to support and help out, which has been vital to Flint’s comeback. Johnston said the $26 million renovation of the historic Capitol Theatre on Second Street will help Flint’s reputation as an entertainment destination in the future

After lunch, I strolled over to Flint City T-Shirts, next door to the Ferris Wheel, and met Marcus Bieth. Bieth is a Flint native who has seen all of Flint’s struggles and triumphs firsthand. He assures me that it is an exciting time to be in Flint and great things will continue to develop in the city in the coming years.

“I’m not going to comment on the water crisis, I was asked not to.  I will say that the city its coming back in a big way, the Ferris Wheel opened next door and has been a place where new businesses have been able to open and thrive and you see places popping up all over town that attract people to the city.”

I asked him what biggest difference he has seen in Flint’s revival.

“Before the revival, people were not coming down here to do anything other than go to court or take care of some parking ticket. Now, you’ve got shops and restaurants and fun things to do, people can come downtown now and walk around and enjoy the park, grab a cup of coffee, or go see a show. U-M-Flint has been a big part of this revival too;  they’ve been essential in bringing in younger people to the city and building those new dorms have been the main reason for it. We also have the Buckham Alley Music Festival in the summer which is a big attraction for not only residents of Flint but also non-residents.”

Flint City T-Shirts has been around since 2003, and Bieth is ecstatic to see what has transpired in the city recently. “I’ve been here so long that I’m happy to have been a part of Flint’s rise back”

Flint’s rise is a testament to the resilience of the city. Don't sell it short. 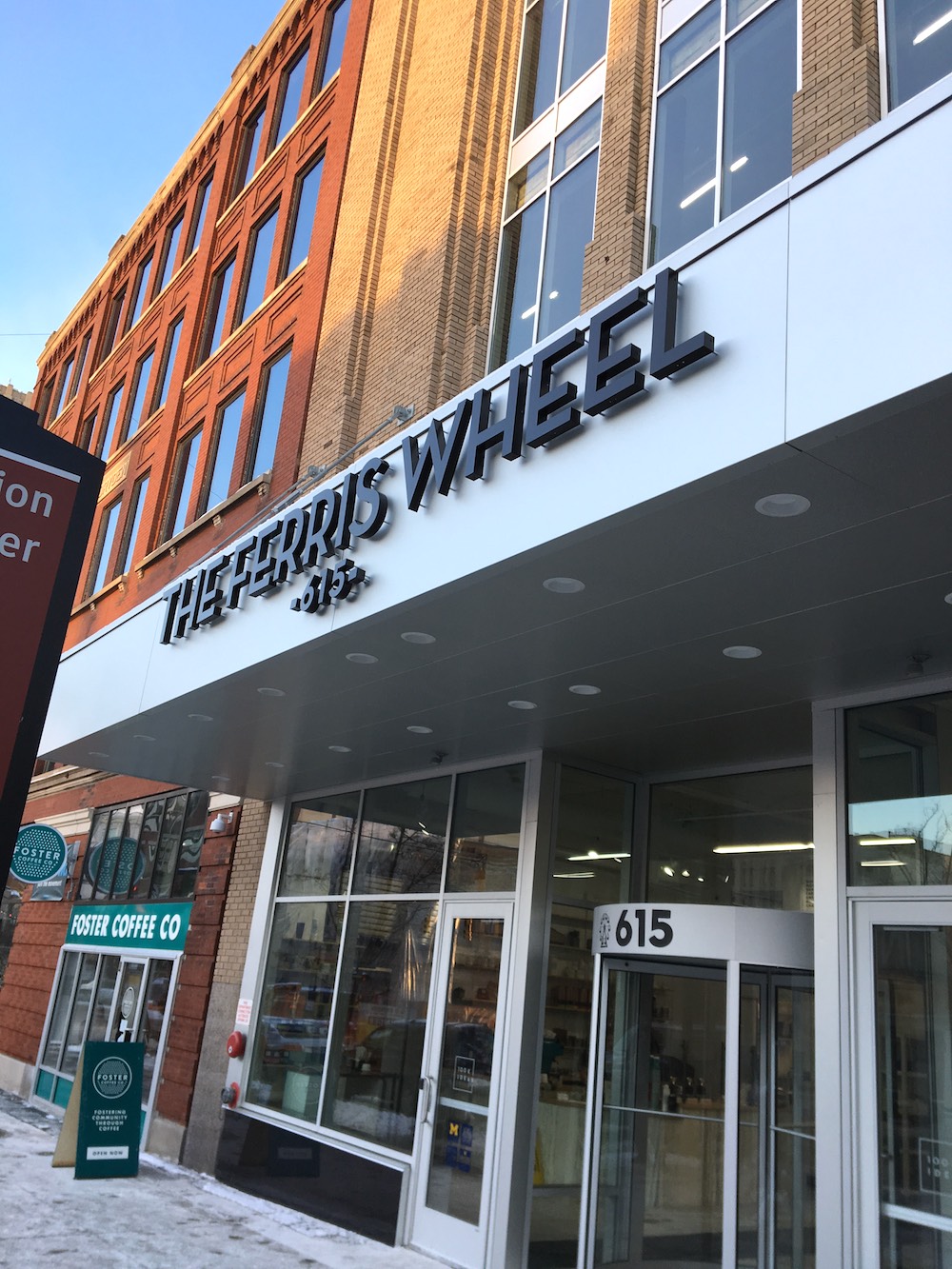 The Ferris Wheel is the microcosm of Downtown Flint’s revitalization. 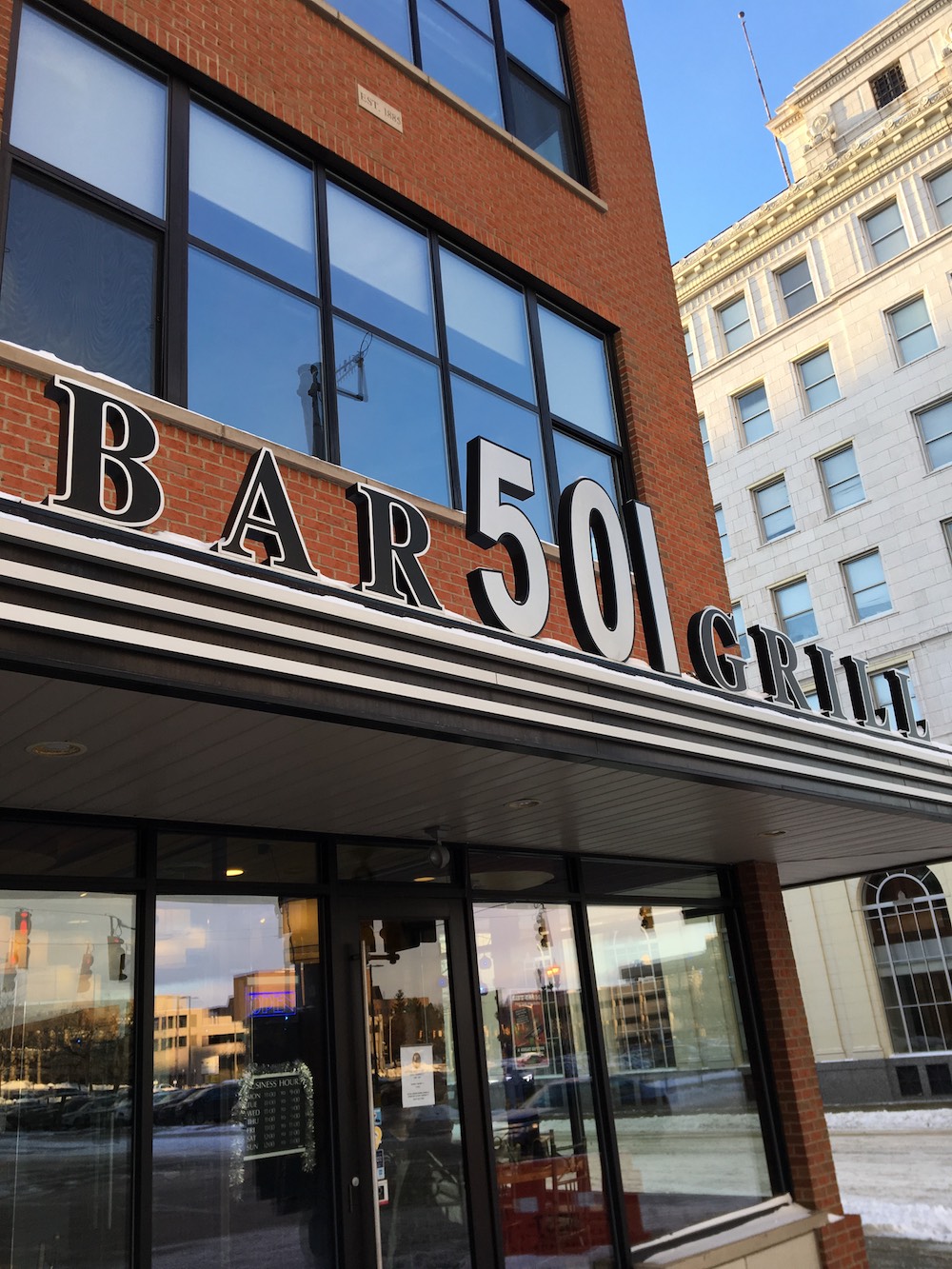 501 Bar and Grill on South Saginaw Street to have lunch. 501 opened in 2009 and has been a favorite in Downtown Flint ever since. 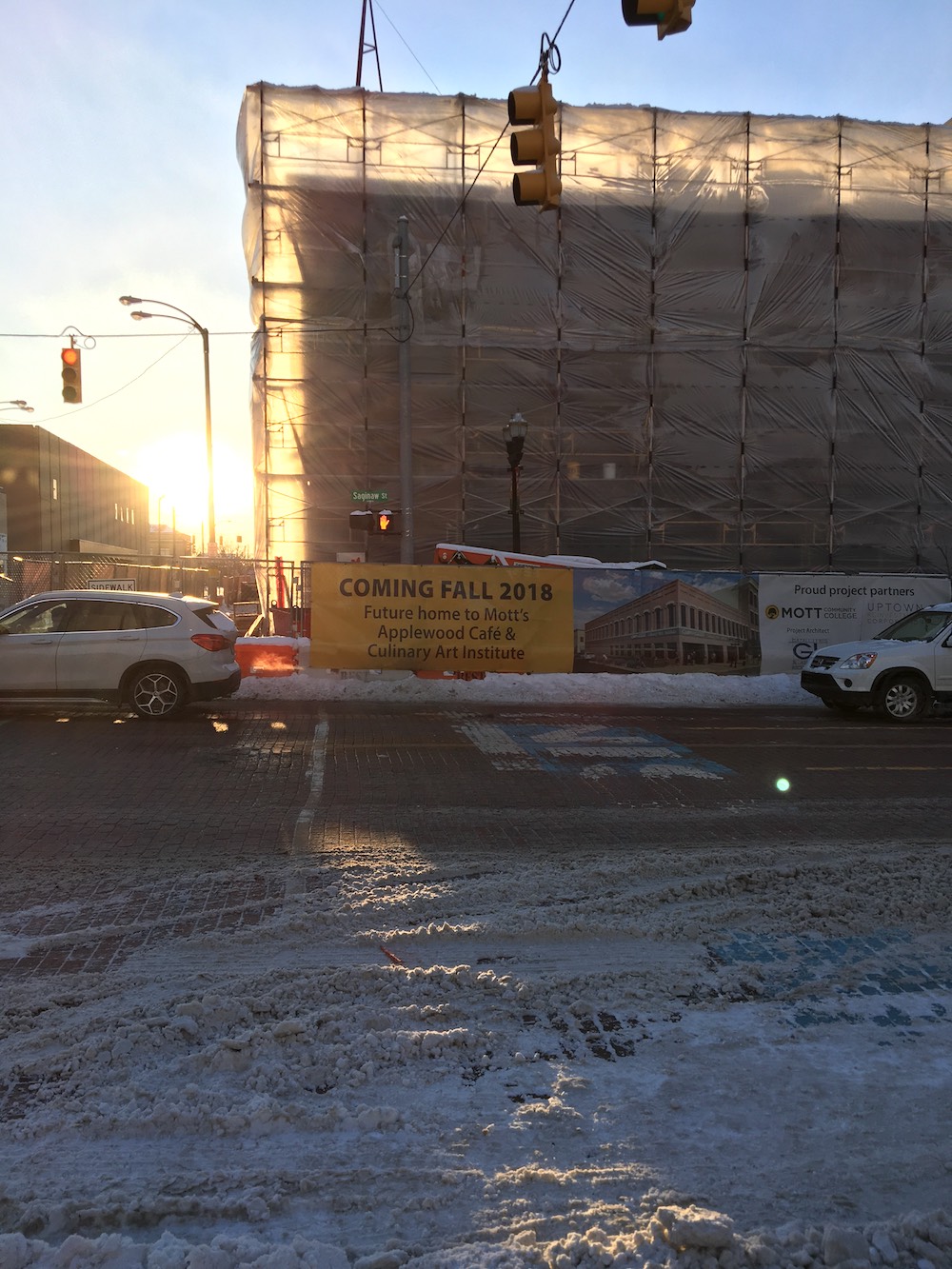 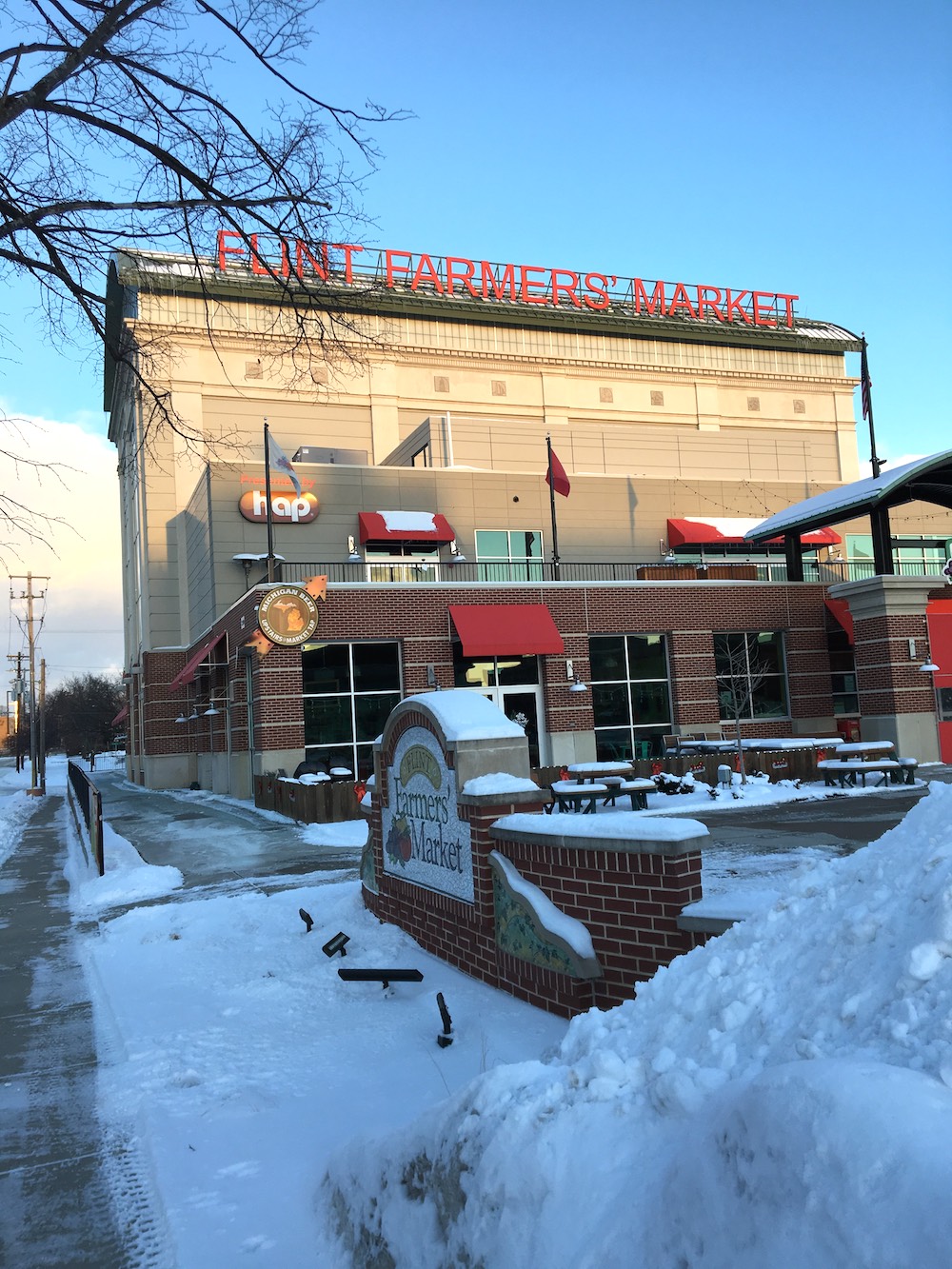 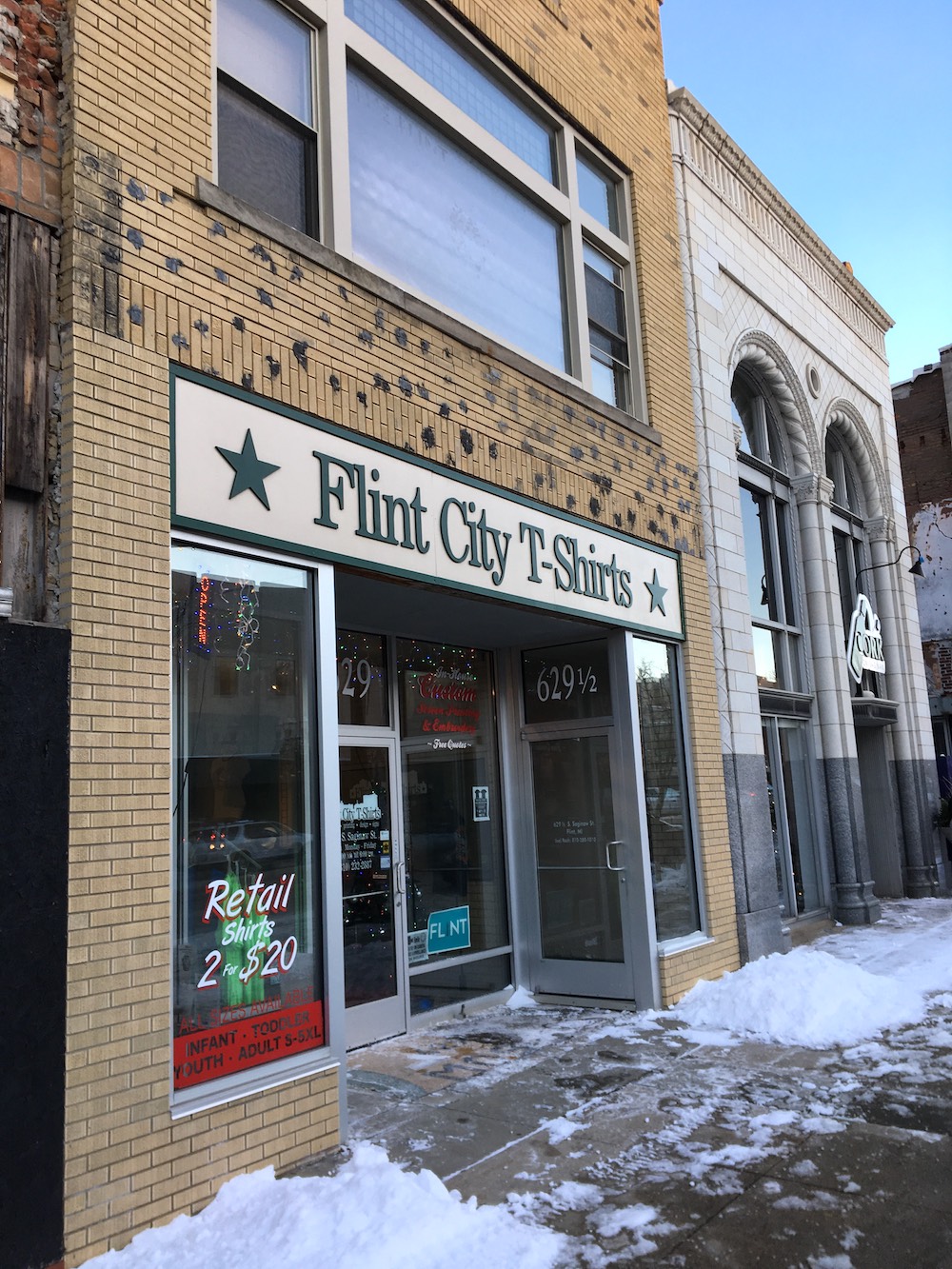