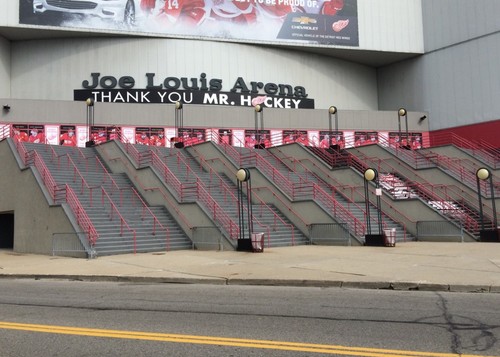 What to do with the defunct Joe Louis Arena?

A development firm controlled by the former creditor, New York-based Financial Guaranty Co., which took possession of Joe Louis Arena as its payoff during the city's bankruptcy, had plans to raze the building and turn the property into a first-class hotel. It ultimately got about 13 cents on the dollar for its $1.1-billion claim against the city.

So, on Monday the company sued the city in federal court in Detroit for more time to devise a plan to develop the site, reports the Detroit Free Press. It is seeking a two-year extension to city's fall 2017 deadline to submit a redevelopment plan for The Joe.

JC Reindl of the Freep reports:

The firm says it needs the time extension because, among other reasons, the development it was contractually obligated to build on the arena site – a "first-class" hotel with up to 30 floors and at least 300 rooms – may no longer be the best idea because numerous other new Detroit hotels have opened and the location isn't so great.

The firm says city officials refused its requests for two years of extra time, and would only agree to 180 days.

"We had what we thought was a cooperative, productive relationship with the city," Donnelly said in a phone interview. "Then all of the sudden something changed, and we’re not sure what it is. We are very frustrated.