'Everyone Knew:' Personal Tales of Unease Are Among Reactions to Lessenberry Article

Claims of inappropriate behavior by veteran Metro Detroit journalist Jack Lessenberry prompt colorful reactions on social media, on a local Reddit forum and at our site.

Comments about detailed coverage Thursday morning talk about "an open secret" and include a 2018 example of "abusive and threatening emails." Several question whether his roles as a journalism educator, columnist and radio commentator should continue.

"Everyone knew. No one did anything," posts Lansing public relations executive Jen Eyer, a former MLive Media Group engagement director. "What will the response be now?" 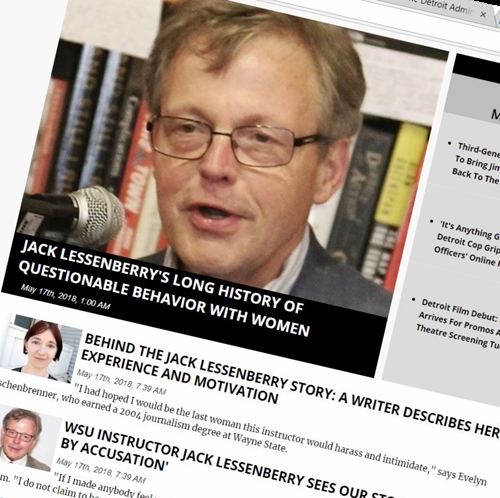 A female journalist at The Blade in Toledo is repelled by part of the Wayne State journalism instructor's response to coverage of his missteps. Deputy editorial page editor Wynne Everett tweets:

What infuriates me most is the whole "Oh, the rules were different back in the day" defense. NO, the rules were never different. You just knew you would not be held accountable if you broke them.

Unspoken, but Not Secret

Jean Johnson, a Detroit News designer since 2012 and a WSU journalism graduate ('08), posts: "These students deserve so much better." She uses the tag "#youdontknowjack."

The investigative reporting is by Evelyn Aschenbrenner and Peg McNichol, who earned journalism degrees in 2004 at Wayne, where Lessenberry has been on the faculty since 1993 and now heads the journalism area. 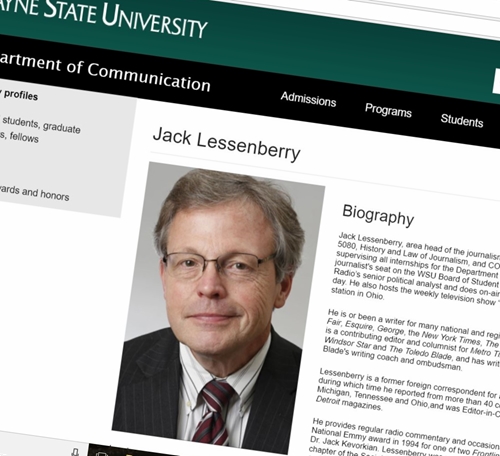 A sampling of reactions posted publicly: 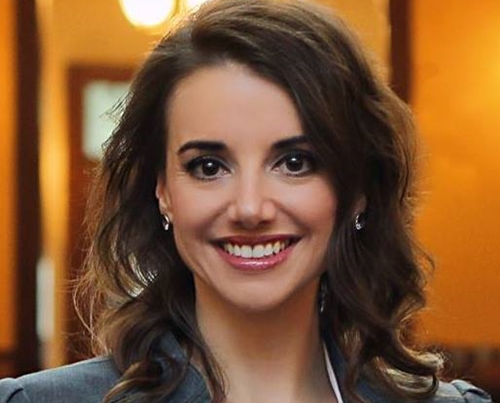 For the past five months, Jack has been trying to destroy my personal reputation. My crime? Publicly criticizing one of his columns back in December. For that, he:

But his editors at multiple publications also deserve scrutiny for their inaction. Everyone already knew what he's like, and no one wanted to do anything about it. In my case, they even continued to let him use their platforms to smear me. Will they finally do something now?

Eyer is a senior vice president at Vanguard Public Affairs in Lansing.

Another first-hand perspective emerged earlier from a 2014 WSU journalism alumna now working as a copy editor in Southeast Michigan. She asked reporter Ashenbrenner to withhold her name for privacy reasons.

The ex-student says Lessenberry kissed her cheek at a 2014 awards preentation, though she tried to lean away. Actions such as that and abrasive classroom comments "were so well-known among the women in the department," she says.

She didn't complain formally because "the possibility of repercussions is always in the back of your mind. . . . I don't want to cross this man. I don’t want to do a thing that would make him target me. . . . I just wanted to get out and move on."

Here's how she recounts the "extremely uncomfortable" cheek peck after a Spirit of Diversity awards ceremony:

"As we [she and her mother] were getting ready to leave, I saw Jack speaking to one of his colleagues… . . . [I thought], now I can go out the door and never see him again.  And that will be that. When he saw me walk by, he turned away walked toward me and called my name.

"I knew I couldn't pretend like I hadn’t heard him. He approached me -- not head-on, but from the side . . . my right side facing him. I was facing toward the door, I turned at an angle, not fully around. I was hoping he would say some quick farewell or good luck. Instead, he grabbed my upper right arm and pulled me close to the point where I had to lean to not fall over. I was not comfortable with this contact.

"Then he leaned in and kissed me on the cheek. I instantly turned my head away. He gave me a peck on my right cheek. I was extremely uncomfortable. . . .

"If you had asked me at the time if that was sexual harassment or miscdcont, I would have said no . . . just a creepy old guy doing creepy old guy things. He comes from a different era. People did things differently back then. When a man in a position of power does something that makes you uncomfortable, it's easy to write it off, just let it go.

"If something like that had happened today, I would 100 percent completely view it as inappropriate. . . . It’s kind of sad, the things we are able to minimize or repress. Four years later, I have a much better understanding of power dynamics after having been in the industry. . . .

"That single incident in that building made me think that any opportunity that he could offer me would not be freely given. It would come at a cost that I would not be willing to pay. . . . That experience, combined with his [attitude of] 'I'm going to be rude and condescending to everyone until you’ve proven yourself worthy,' is why I've not been in contact with him since I graduated."