Jack Lessenberry quit as a columnist at Metro Times, where he has commented on politics, public affairs and newsmakers in Michigan and beyond for a quarter-century.

His action comes hours after an investigative report at this news site revealed behavior considered offensive by female colleagues at a Memphis newspaper and more recently by students he taught at Wayne State. 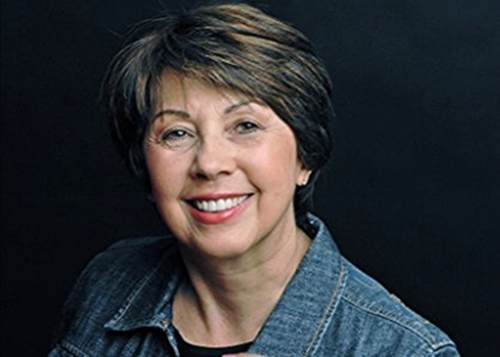 He also tells Wayne State University that he won't teach or interact with journalism students while it investigates reported misbehavior, according to Crain's Detroit Business, where Annalise Frank writes:

Wayne State said Friday that it is hiring an outside investigator to assess claims and conduct interviews about Lessenberry, who is head of the journalism faculty. It started the process Friday to look into misconduct claims, Linda Galante, WSU's associate general counsel, told Crain's.

Lessenberry also informed Matthew Seeger, dean of the College of Fine, Performing and Communication Arts, under which journalism instruction is housed, that he would step down from instruction and student engagement over the summer and until the investigation is resolved, Galante said.

The university attorney, who wouldn't identify the specialist it hired, describes her as "a very experienced person doing Title IX investigations. She will be retained to do an independent, neutral investigation."

WSU decided not to handle the review itself as "a matter of credibility," adds Galante, citing "all of the allegations that were raised in this Deadline Detroit article."

She encourages "anybody who says this happened to them" to contact her at (313) 577-2268 or lgalante@wayne.edu for referral to the investigator. Her postal address is: Office of the General Counsel, Wayne State University, 656 W. Kirby, 4249 Faculty Administration Building, Detroit, MI 48202. 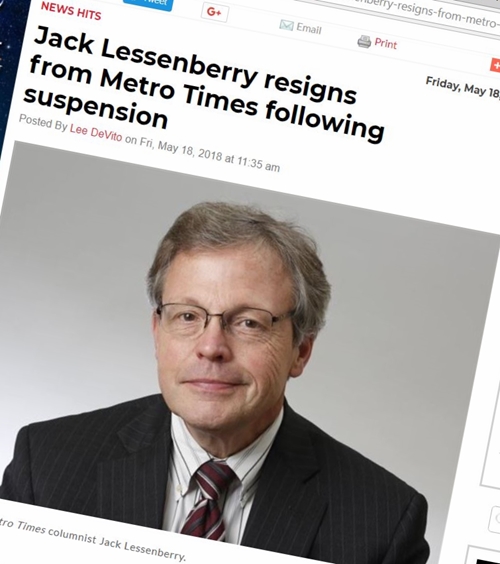 His column topics have included the issue of sexual harassment. Five months ago in Metro Times, he called it "a national buzzword" and "the current crime the nation is fixated on."

At Metro Times, the veteran newsman's departure from the alternative weekly is not amicable, its editor acknowledges.

"Jack didn't agree with my decision" to withhold a column written for next week and to suspend him during a review of the situation, Lee DeVito writes. He adds:

He pointed out that not one of the women in the Deadline story had come forward to file a formal complaint with WSU, and that his other employers, Michigan Public Radio and the Toledo Blade, had not decided to suspend him. With that, he tendered his resignation from Metro Times last night.

Suspending the writer of more than 1,000 columns "was a decision I did not make lightly," says DeVito, who has written for the alternative weekly since 2009 and became editor two years ago.

Jack has written his Politics and Prejudices column for the paper since 1993. . . . He had never missed a week.

I have enjoyed reading Jack’s column since I was a teenager, and I especially enjoyed reading it each week as his editor. . . . I am proud of the work he has done for Metro Times. . . .

[But] I felt I owed it to our readers to take a serious look at the allegations, and that I needed time to process all of the details.

Lessenberry's Metro Times column topics have included the issue of sexual harassment, which he called "a national buzzword" and "the current crime the nation is fixated on" in a column last Dec. 6 about John Conyers just before the Detroit congressman quit.

Last Nov. 29, in the context of controversies involving Sen. Al Franken of Minnesota and Senate candidate Roy Moore of Alabama, he wrote:

"There should be no tolerance whatsoever for genuine sexual harassment, ever. . . . Nobody should touch anyone against their will."

Meanwhile, the University of Michigan issues a statement about Michigan Radio:

We are aware of media reports that make allegations against Jack Lessenberry in his role as a journalism instructor at Wayne State University. Michigan Radio and the University of Michigan are committed to a workplace free of harassing behavior. . . .

The "media reports," to be clear, actually consist of one article at one media site. (Yes, this one.)

Ripples from this news site's investigative report on an apparent pattern of insensitive behavior by Metro Detroit journalist and educator Jack Lessenberry include responses from his main employer and two secondary ones.

Wayne State University, where the 66-year-old newsman has been a junior faculty member since 1993, says it may investigate his conduct.

"It's hard when you don't have someone coming forward," university attorney Linda Galante tells Louis Aguilar of The Detroit News, explaining that no active complaints exist. WSU did not respond to one of the Deadline Detroit conbtributors who reported this in-depth article.

Galante said the university will “probably sit down and have a discussion with a number of individuals” regarding the accusations.

In a Thursday email to The News, Lessenberry said he would let the "university attorney speak for me." 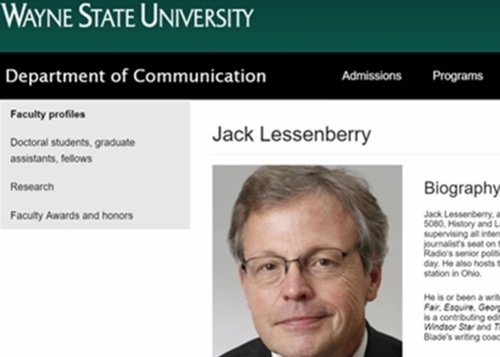 He also writes columns for Metro Times, does Michigan Radio commentaries and has a part-time role at The Blade in Toledo.

"We decided to suspend Jack for the time being while we consider the details outlined in the Deadline report," says Metro Times editor Lee DeVito. "Jack doesn't work in the Metro Times office — he files one column a week remotely — so he does not interact with our staff, and we have no complaints filed against him."

In a reply to Deadline contributor Peg McNichol, he adds: "We tend to get a fair amount of WSU interns, but none have ever mentioned anything like the details alleged in your report."

At The Blade, where Lessenberry is a columnist and ombudsman (public editor), marketing director Luann Sharp tells Aguilar an investigation will be conducted. "We will have to do some due diligence," she's quoted as saying. "It's just important to see if we had any similar instances to the ones in that story." 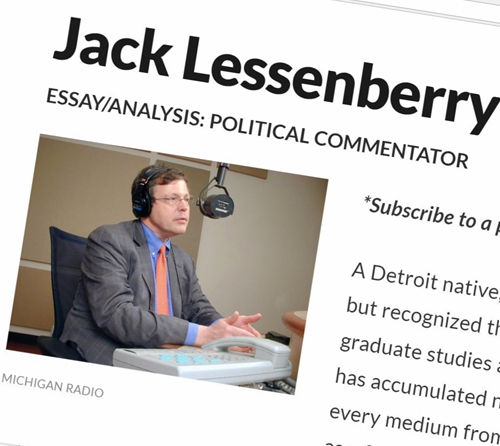 Blade reporter Alex Mester calls this site's revelations "extremely disturbing" in a tweet that adds: "I expect a full and thorough inquiry . . . into Lessenberry's behavior while employed here as our ombudsman, as well as how any possible complaints by Blade employees were handled."

That paper's newsroom union, Toledo Newspaper Guild/Communication Workers of America, reacts forcefully to the report of allegedly inappropriate conduct at a Tennessee daily decades ago and at WSU more recently.

"Blade management telling other media outlets they will investigate the conduct of Jack Lessenberry, when they already know about it and have refused to respond to staff requests for an investigation, is pretty much peak Block Communications bullshit," tweets unit president Nolan Rosenkrans, a reporter. In an earlier tweet, he says:

Statement coming now. Jack Lessenberry said in an email to me just now that John Robinson Block, publisher of The Blade, knew about the allegations against him. https://t.co/6Rlk7vMPEr

In a seven-tweet thread, the bargaining unit says its executive board asks the owners "to immediately sever all ties with Blade Ombudsman Jack Lessenberry . . . and to conduct an investigation into Lessenberry's conduct, to reveal what extent Block Communications was aware of accusations against him, and make the investigation publicly available." It adds:

The Guild demands to know what BCI management knew about Lessenberry's history, and we demand to know if any BCI employees have made complaints against Lessenberry while he has been ombudsman and columnist at The Blade.