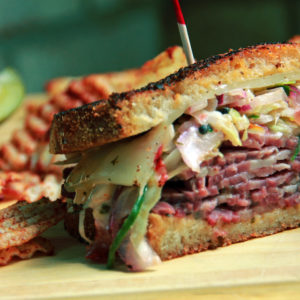 The seed for launching a food truck in Detroit with Jewish-Indian fare was planted nearly 8,000 miles away in India some three year ago. No surprise it began with a Jew and an Indian.

The Jew is Matt Daniels, who grew up in Southfield and attended Harvard. The Indian is Meghana Shrivastava, who he met in India.

Both started cooking at home in Mumbai, India, together and inviting friends, who suggested they open a restaurant.  So, they  did, in the town of state Goa, where they serve fresh salads, pizza and rotissiere chicken.  But because of weather, including the Monsoon season, they only operate it from Nov to March.  So they were looking for something to do in the interim.

In 2016, they launched a food truck in the Detroit area, Nu Deli, a clever play on words. "Nu" is a  Yiddish word for "so" as in "so, what's new?" Nu Deli is a play on deli, as in delicatessen, and New Dehli, an urban district in India's Dehli.

The truck serves sandwiches like corned beef with "an Indian twist."

Daniels' parents, Larry and Ruth Daniels, who are retired, also work on the truck.

The food truck moves around town, appearing in places like Ferndale and Cadillac Square in downtown Detroit. After the lunch rush in Cadillac Square one day last week, Daniels spoke to Deadline Detroit: