Former Wayne State University journalism faculty chief Jack Lessenberry, who retired last month, took advantage of some female students, showering them with compliments about their looks, sending provocative emails, retaliating when he was rebuffed, and engaging in "numerous passionate kissing sessions" with one woman in his office and car, an outside investigator tells WSU in a detailed report.

"Some day I shall kiss you; the jail time will be worth it," Lessenberry emailed to a senior on April 29, 2017.

The just-completed internal report is by attorney Tara E. Mahoney, a partner at the Honigman law firm in Detroit. WSU asked it to investigate the day after a May 17 report in Deadline Detroit about Lessenberry's conduct with women spanning nearly 30 years, from his time as a manager at the Tennessee Commercial Appeal to his 1993-2018 time as an instructor at Wayne. 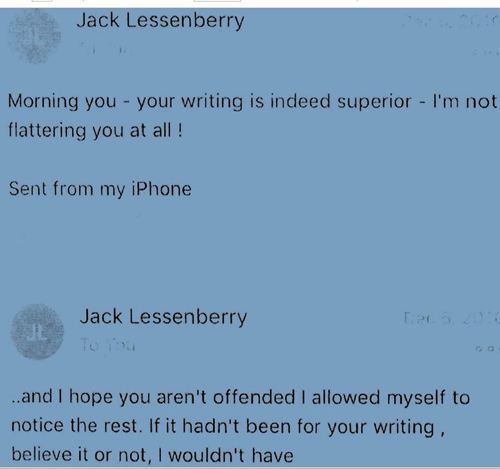 The six-page report, accompanied by nine pages of email images, was obtained Thursday through a Freedom of Information Act request.

Mahoney conducted 20 in-person and phone interviews, primarily with past WSU students and faculty members. One interviewee was Evelyn Aschenbrenner, who reported on and wrote the Deadline article with Peg McNichol. Both are 2004 journalism graduates of Wayne.

"I have not attempted to include every allegation against Mr. Lessenberry," Mahoney writes in a summary atop her findings, "but I have attempted to provide WSU an overview of the very troubling conduct that was disclosed."

Had Lessenberry not resigned June 22, she declares, "I would have recommended termination of his employment based on the factual findings and related policy violations."

Update: Lessenberry did not respond to an invitation by Deadline Detroit to comment on the report. But he told the Detroit News on Thursday: “Much of this is wholly untrue, inaccurate or distorted, but you can’t prove a negative, especially when your accusers are not identified. I cannot control what anyone believes, am no longer at Wayne State, and only wish to get on with my life and work.”

As a result of student interviews, the report found "consistent stories" about Lessenberry having "pet" or "favorite" female students who got extra attention that made them uneasy. "Sometimes these students were admittedly vulnerable due to personal situations, and they believe Mr. Lessenberry preyed on this vulnerability," says the attorney, a workplace sexual harassment specialist.

Hundreds of emails to a high school girl

The report also cites Lessenberry's hundreds of emails in the early 2000s with a teen girl who was a high-school student of his wife, during a marriage that later ended in divorce. "Although this woman did not have issues with Mr. Lessenberry in his capacity as a WSU professor, her story was, in many ways, consistent with the stories I heard from current and former students," the report said. 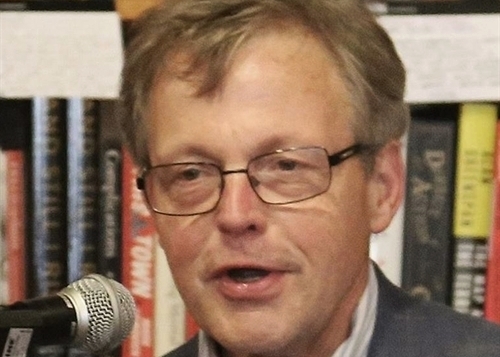 Jack Lessenberry: "You know you mesmerize me, and I could get lost in you," he emailed an undergraduate.

At the time, Lessenberry was in his mid-50s and the woman was 16 when the relationship began.

"It was primarliy an email relationship (they exchanged hundreds of emails over a two-year period, many of which I reviewed," attorney Mahoney wrote. "The emails included Mr. Lessenberry being overly complimentary of the student, praising her 'intellectual sophistication,' telling her that she was 'very bright' and 'pretty special,' calling her his 'little flower' and asking if she would 'be my muse.'"

Wayne students interviewed said Lessenberry's extra attention across student-faculty boundaries made them uncomfortable. He was in his 50s and 60s at the time -- about 40 years older than some of his students.

"Some students stopped wearing nice clothes to Mr. Lessenberry's classes and another stopped wearing certain makeup," the report says. "Others developed strategies to avoid physical contact by refusing to be alone with Mr. Lessenberry and/or holding books in front of their bodies to avoid an attempted hug. One student explained that she had to 'throw on her thickest skin and try and get through it.'"

The report lists specifics alleged by students, but does not include names.

For example "Student A" is in her early 20s and graduated in 2017. Her experiences with Lessenberry occurred from 2015-17. 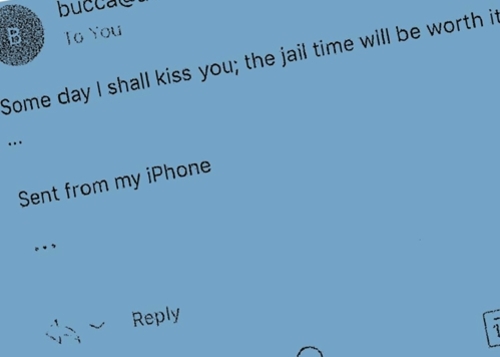 Lessenberry once wrote on her test: "I wish I could love you." He also sent steamy emails that sound like excerpts from a romance novel.

She saved that evidence and showed it to Mahoney, who includes these examples. (Scanned originals are pictured below):

Lessenberry invited her to dinner repeatedly, and she continually said no. Eventually she felt she had to say yes because she feared the consequences of continuing to refuse, the report says.

"Once at the dinner, Mr. Lessenberry kept inching closer to her in the booth and put his hand on her thigh. The student said that she was uncomfortable and left the dinner as quickly as she could."

On top of that, Lessenberry sent the student about 12 personal cards and gifts, including a calendar, to her home address, which he required students to include on their papers.

Lessenberry required students to close his office door during meetings.

On one occasion, the discussion "centered on the student's appearance, and when she got up to leave, Mr. Lessenberry stood and walked her to the door. He then outstretched his arm to keep the door closed and attempted to kiss the student on the lips. She turned her head so the kiss landed at the corner of her lip/side of her cheek. The student was shocked and uncomfortable. She became flustered and said this isn't right and was able to exit the office."

The student explained that after she rebuffed his advances and paid less attention to him, he began to retaliate, the report said.

For instance, the report noted that in the spring of 2017, Lessenberry told faculty she was a brilliant student and had done exceptionally well on the midterm. But by fall, he told faculty she was undeserving of a scholarship that he had helped her obtain, and suggested she not get it.

The report lists others, including "Student B," who is in her early 20s and graduated in 2015.

Lessenberry paid the student to feed his pets and paid at least one of her mortgage payments of about $750.

Lessenberry told the student they would need to keep their relationship more private, the report says. The student felt it was going down a slippery slope and was seeking a way out of the relationship.

Consequently, she said she would no longer see Lessenberry or partake in an independent study he had scheduled with her for the following semester.

"Student C," whose story was included in the Deadline Detroit report, was receiving a ride home from Lessenberry after class. She was a student in 2005-06 and was in her early 30s then.

Lessenberry asked if she had a boyfriend, and when she replied "no," he said "good."

In the car, he commented that he's had some students who would do anything for a good grade and reached over and squeezed her thigh. 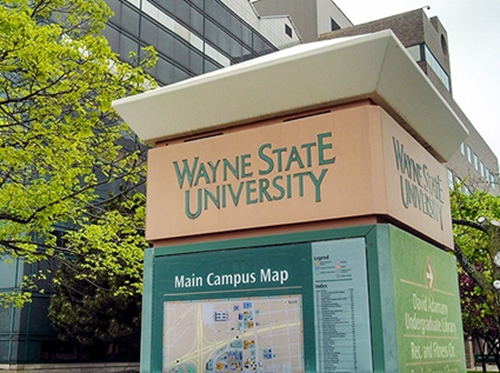 "Student D," who attended Wayne around 2014, says she told Lessenberry while on an elevator that she was exhausted. He assured her "you're going to be OK, I promise" while using the back of his hand to caress her arm.

She felt very uncomfortable and rushed from the elevator.

She ended up not getting the grade she felt she deserved and emailed him to ask how to improve it. Lessenberry repeatedly asked her to come to the office to discuss the matter, but she felt uncomfortable doing so, fearing "he would've tried to do more" to her.

The report notes that only Student A reported Lessenberry's conduct to current WSU officials or facuilty. And in Student A's case, she told a faculty member in December 2017, who suggested she come forward and report Lessenberry's behavior. The faculity member did not report the conduct herself.

Besides that, some students interviewed mentioned Lessenberry's behavior, including teaching style, compliments to them and retaliation to Ben Burns, the former head of the journalism program, who passed away in 2012.

"It would be prudent to review reporting requirements with all faculty to ensure they are aware of proper steps that must be taken if a student shares information that could be a policy violation," the report concludes. 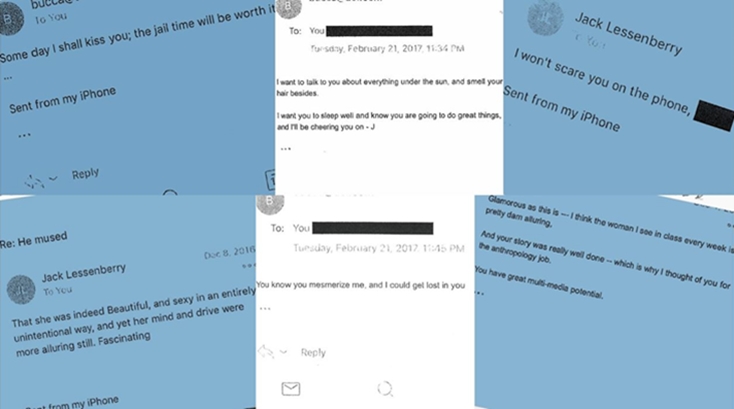 These scanned emails are part of the attorney's report. (Tone added.)