Paul Harris: Miguel Cabrera Has Had a Brilliant Career, and a Few Regrets Too 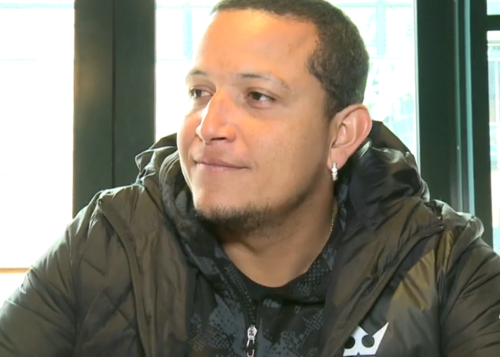 The author is a Detroit freelance writer and former Detroit News reporter.

Miguel Cabrera faces the coming end of his brilliant career with nothing left to prove on the field, but a lot to deal with off it.

His accomplishments are a run-on sentence: The most dominant right-handed batter of his era has four American League batting titles, was twice named Most Valuable Player, the first player in 45 years to win a Triple Crown. He has 465 career home runs, a .316 lifetime average and is only 324 hits away from 3,000.

Most of those totals have been amassed for the Tigers, who acquired Cabrera from the Florida Marlins in 2007, after five seasons in Miami during which he helped the team win the World Series as a 20-year-old rookie in 2003.

Today Cabrera is 35, and his 6-foot-4-inch, 249-pound body is breaking down, having endured 16 major-league seasons. For 11 of them, he averaged 157 games per season, astounding teammates and fans with his endurance and pain tolerance.

But Cabrera is out for the remainder of 2018, with a ruptured biceps tendon, having suffered a hamstring injury earlier, he’ll finish the year with a .299 average, three home runs and 22 RBIs.

Statistics are the foundation of baseball, and his are impressive and Hall of Fame-worthy. But for all they reveal of a dedicated, skillful and tenacious player, they say nothing about the man who compiled them. 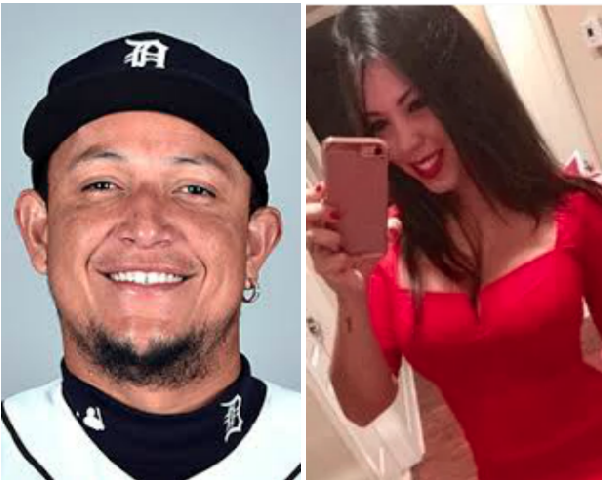 Cabrera’s personal life is beyond complicated. In spite of, or perhaps because of, his success as a ballplayer, he pays protection money to unnamed parties in his native Venezuela, to keep his mother safe. He’s currently juggling two families, a wife and mistress and five children between them. After two public alcohol-related incidents, he finally is said to have quit drinking.

But he has, apparently, been able to compartmentalize all of that and leave it behind when he walks onto the field.

“The power of being a celebrity and nature of superstardom today is that you can pretty much be independent as your own man,” says longtime Detroit News baseball writer Lynn Henning. “The club makes few requests of you (beyond on the field) and you can live a surprisingly private life.”

Private enough for Cabrera to have what had been a secret second family in addition to Rosangel, his wife of 15 years, and their three children.

It did not come to light until last year, when Cabrera was sued by Belkis Mariela Rodriguez of Orlando, Fla., with whom he apparently had a long-term extramarital affair that produced two children, now 5 and 2.

According to published reports, Cabrera had been paying Rodriguez $15,000 per month, but Rodriguez wants considerably more – $100,000. Cabrera also allegedly helped Rodriguez buy a $1 million house, a Range Rover, Disney cruises and other perks for her and their children. The matter is working its way through Florida courts.

“Do we know much about his life outside of baseball? Apparently not with the Florida thing,” Henning said.

Cabrera can easily support two households. He will earn $30 million this year and for the next three seasons. After that, he’ll get $32 million for two more seasons.

Despite the greatness of Cabrera’s career, it is considered one of the worst contracts in Major League Baseball because of his age and worsening health. It virtually cements him in Detroit, as intended. 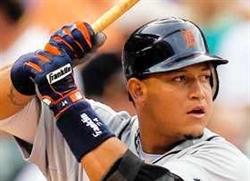 The contract, which Cabrera signed as an extension in March 2014 with late Tigers owner Mike Ilitch and then-general manager Dave Dombrowski, is the reason there have been no serious discussions of Cabrera being traded from the rebuilding team, as Justin Verlander and others were last season. No other team would even consider taking on Cabrera’s contract.

Insiders say the extension was Ilitch’s idea and that he had to talk Dombrowski into it.

Ilitch looked at it as a reward for what Cabrera had already done wearing the Olde English D. He wanted to make sure Cabrera finishes his career as a Tiger and be identified with the organization the way Al Kaline, for example, has been.

Contrary to the dumb-jock stereotype, Cabrera -- who once thought he’d study engineering -- has a keen head for the visual elements of the game. In 2012, stepping to the plate for his first at-bat of a game, he noticed that the batter’s box was not the size it was supposed to be. Two umpires measured it and agreed. The ground crew was called to redraw the lines.

Henning added another way in which Cabrera uses his intelligence on the field.

With his teammates, Cabrera seems happy-go-lucky, laughing and talking in his unique combination of Spanish and English, engaging opposing players in good-natured banter when they meet on a base. But with the press, Cabrera is often unavailable and unresponsive, even when an interpreter is there. He's sometimes defensive and even combative.

“On the personal side, he can be – I guess – a little frustrating,” Henning says. “He really hasn’t had a conversation with me in about four years.”

Henning also recounted a situation with the team in Baltimore this past April – which he wrote about in a column for the News – in which Cabrera had agreed to do an interview with Henning on a story that the writer had intended to be totally positive. But when the interview began, Cabrera was defensive and combative with Henning, who remains puzzled by the incident.

“It takes far more energy to be contentious, as was the case in Baltimore,” Henning said.

Cabrera will finish the 2018 season in rehab for his tendon, an unfamiliar place for a player who led his team into the postseason four consecutive years. He is expected to move from first base to full-time designated hitter in 2019, which would make things far easier for him, physically.

But his personal life will remain a distraction.

Wife Rosangel was Cabrera’s high school sweetheart. She filed for divorce in April 2017, a few months before Rodriguez’ paternity suit, but has withdrawn the petition.

And Cabrera has had well-publicized incidents involving alcohol over the years. A domestic dispute with Rosangel got physical late in the 2009 season. After a drunk-driving arrest two years later in Florida, Cabrera received treatment and is said to no longer drink.

Spending money was never an issue for Ilitch. In 2012, the Tigers signed Prince Fielder, the son of the team’s 1990s star Cecil Fielder. Fans took to the super-size slugger, who once blasted a homer into the stands at Tiger Stadium – as a 12-year-old. He took over Cabrera’s old position at first base, moving the veteran to third.

On offense, with Fielder batting cleanup behind Cabrera in the order, Cabrera became the first player since Boston’s Carl Yastrzemski to win the Triple Crown, leading the A.L. with 44 home runs, 139 RBIs and a .330 batting average.

He won the A.L. MVP Award as Detroit defeated Oakland in five games in the divisional series and swept the Yankees in the championship series, to reach its first World Series since 2006. But the Tigers themselves were swept in four games in the World Series by the San Francisco Giants.

It’s not clear when Cabrera’s extramarital relationship with Rodriguez began, but the oldest of the two children from their relationship is 5, which means the relationship had already begun by, at the latest, early 2012, and likely before.

But the affair wasn’t distracting Cabrera from his work. He continued to put up spectacular numbers at the plate in 2013, winning his second consecutive A.L. MVP Award. That was despite being bothered by a nagging groin strain for the last third of the season.

There is also a rumor – which insiders say is true – of how Cabrera re-injured his groin in late July 2013.

It goes like this: Fielder’s wife was said to be sleeping with young Tigers outfielder Avisail Garcia. The subject came up in the clubhouse, with Cabrera taking Fielder’s side. Fielder and Garcia got into a fight and Cabrera broke it up, hurting his groin in the process.

(It must have been quite a battle to witness with Cabrera, then at around 260 pounds, trying to get between the 275-pound Fielder and Garcia, who tips the scales at about 240. Garcia was immediately traded.)

The groin injury bothered Cabrera for the remainder of the regular season and into the playoffs. It affected him at the plate and on the base paths. But he only missed 14 games and the Tigers won their third straight A.L. Central Division, once again bested Oakland in the Division Series but were eliminated by the Boston Red Sox in the ALCS.

He had surgery in Philadelphia on Oct. 29, 2013, to repair his groin muscles.

'It Hurt So Much'

“The doctor said he didn’t understand how I could have played with so much pain,” Cabrera told ESPN. “It hurt so much that I almost couldn’t lift my right leg, and that was the reason I couldn’t reach outside fastballs at the end of the season.”

When he returned for spring training, not only was he coming off surgery and rehab, but there were changes in the Tigers clubhouse: Brad Ausmus had replaced Jim Leyland as the team’s manager and Fielder was gone, traded to the Texas Rangers for veteran second baseman Ian Kinsler during the offseason. That meant Cabrera was back at first base.

He also signed the contract extension on March 27, 2014, with two years remaining on his existing deal.

“I want to finish my career here,” Cabrera said at the news conference announcing the extension. “I want to be a Tiger for many years to come.”

As the season went on, Cabrera showed signs of recovery from the surgery. His numbers weren’t up to his previous levels, but still solid, and outstanding for most players. The Tigers won their fourth consecutive Central Division title, but were swept by the Baltimore Orioles in three games in the division series.

The 2015 season brought another batting title (.338), the fourth of Cabrera’s career, and his 400th career home run. It also included, amazingly, a first for his time – then 13 seasons – in the majors: Cabrera went on the disabled list.

A left calf strain July 3, put him on the DL the next day. He missed 35 games before returning to the lineup. The team also took a big drop, finishing 13 games under .500, and finished last in the division.

The 2016 season was the last in which Cabrera put up Cabrera-like numbers when hit 38 home runs, drove in 108 and hit .316, as the Tigers finished second in the Central and failed to earn a wild-card playoff spot on the last weekend of the season.

And now, 2018 finds Cabrera working not on hitting but healing, tied by his salary to a city where he will likely end his career, challenged on multiple fronts, at home and on the field where he’s earned so much glory.

There are many questions about his future. But they boil down to these: