From Our Archive: Tim Kiska on a Life-Changing Night with Mister Rogers

The writer is an associate professor of communications at the University of Michigan-Dearborn.

Mister Rogers, Anjelica Huston, and most of the TV industry’s power players sat in a hotel ballroom one night listening to Drew Carey tell a joke so filthy and cringe-worthy that even hardened Hollywood heathens were gasping for oxygen. 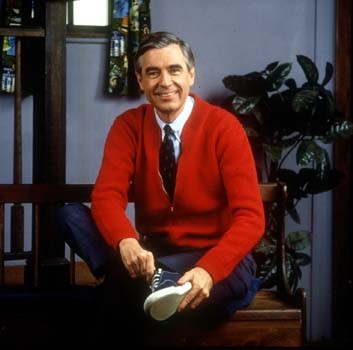 It was the night Fred Rogers showed me the definition of enlightenment.

I tell the story now because a man who entertained youngsters with nothing fancier than an old sweater has become a cultural hero in the summer of 2018. Rogers, who died in 2003 after a decades-long career on public television’s "Mister Rogers’ Neighborhood," is getting a ride in a new biographical film, "Won’t You Be My Neighbor?"

Crowds and word of mouth have been enthusiastic. Commentators have identified the selling point: Americans long to hear about somebody who isn’t yelling, getting fired or arrested or convicted for inappropriate behavior, someone who isn’t about to be disgraced or led away in handcuffs or both.

Fred Rogers fits that bill. None of that stuff happened in his neighborhood. He was just a nice guy with a message of kindness and understanding.

Could anybody be that good? That kind?

I’m here to tell you Fred Rogers was even better than what he seemed.

As The Detroit News' television writer in the 1990s, I joined counterparts from major newspapers every year in Pasadena, Calif. The annual trek is the Television Critics Association’s main event, two weeks of a five-star work environment.

Networks pitched shows at daytime press conferences and nighttime parties with A-list stars. Jay Leno is standing over there. There’s Sam Waterston. Is that Eric Idle holding court in the corner? One of my pals toured the Hollywood rock clubs with George Wendt, of "Cheers" fame. I went for beers in the hotel bar with Al Franken.

On this particular Sunday evening at the Huntington Hotel and Spa in July 1997, the TCA board gave Fred Rogers a Career Achievement Award, putting him in the same lofty niche as Walter Cronkite and Bob Hope. Virtually every major TV critic and PBS hotshot took a seat in the ballroom. Drew Carey was the emcee.

I found myself seated next to Fred Rogers at the dinner table. Anjelica Huston was on my other side. She was there because "Bastard Out of Carolina," a film she directed, won a TCA award. I don’t know why I was placed in a seat usually assigned to the likes of the New York Times’ Bill Carter or the Washington Post’s John Carmody. But for some reason, there I was – dinner buddies Fred on my right, Anjelica on my left.

And then Carey, wearing a screaming yellow sports jacket, took the microphone to begin the festivities.

He opened with a joke that is unprintable even today in most places. It involves sodomy, two animals, a British explorer in a pith helmet, and death. Sodomy opens and closes the joke.

I grew up in the Detroit Free Press newsroom, and therefore swear like a sailor. But Carey’s lengthy joke sent my sensibilities diving for cover. How can Drew Carey possibly be talking about sodomy between animals with Fred Rogers in the house? 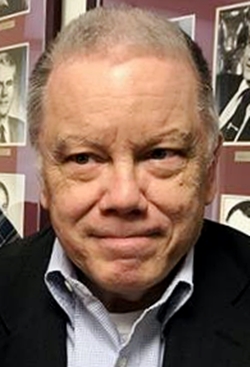 Tim Kiska: "Why, God, did you seat me next to Fred Rogers?" (Photo: Facebook/Bill McGraw)

And I asked myself: Why, God, did you seat me next to Fred Rogers, an ordained Presbyterian minister, on the night Drew Carey went full gonzo? “Now my life is complete,” Carey said. “I’ve told a dirty joke in front of Mister Rogers.”

I looked at Anjelica Huston. She dated Jack Nicholson for years. What could possibly horrify her? She was horrified.

Then I looked at Fred. This is the part that changed my life.

There was no hint of disapproval as Carey’s filthy joke went down the track. Fred Rogers at that moment was all poise and dignity. He gave no signal of self-righteous scorn. He was in some Zen space.  I had no idea what he was thinking, but while everybody else in the room cringed on his behalf, he was just . . . there.

I would say he endured it all stoically, but that would be wrong. “Stoically” would imply that Fred was enduring some hardship.

I wanted to lean over at the end of the joke and say to him: "Some neighborhood we live in, eh, Mister Rogers?" But such a force field of serenity surrounded Fred Rogers that I decided to shut up and observe. Nothing further was said. It became a delightful evening.

When Fred got up to receive his award from a revved-up Drew Carey, Mister Rogers radiated kindness and grace. And then he gave a speech that had many in tears. He noted that we were dining in a wonderful place, that many in the room were unusually successful in their careers, that all of us had a lot of help on the way up. He suggested we think about these mentors who nurtured and promoted us. He asked for a moment of silence to contemplate these people.

Fred Rogers owned that room. It was a venue laden with disbelievers and cynics, all of whom melted to the power of his simplicity and sincerity.

Here’s what I learned from Fred Rogers that night. Dignity – even in the face of weirdness. Grace. Silence is good. Gratitude is good. Being comfortable in your own skin is the ultimate armor.

Most of us, especially these days, would like to live in that kind of neighborhood.