A film based on the saga of an east-side Detroiter who caught a life prison term in 1988 at age 17 opens Friday on 2,500 screens nationwide.

"White Boy Rick," which got a handful of mixed reviews after recent festival showings in Colorado and Toronto, now is reviewed in Detroit's dailies and larger newspapers in Los Angeles, New York and Washington, D.C. 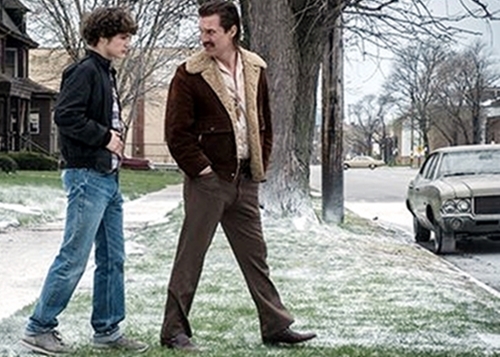 Richie Merritt as Rick Wershe Jr. and Matthew McConaughey as his dad.

Newcomer Richie Merritt impresses critics with his performance in the title role, and Matthew McConaughey gets thumbs up as his dad. But the movie overall is panned more than praised.

"The film overstays its welcome, especially in the slow-going third act, and fails to really develop some of the essential characters outside of the Wershe family," writes Lindsey Bahr of the Associated Press in a review posted Thursday afternoon by the Detroit Free Press.

At The Detroit News, Adam Graham says the new release "suffers from an abundance of plot threads competing for screen time, and it's a struggle to squeeze everything in and keep the story flowing at a steady pace."

♦ Our editor writes: "If you don't know the real story, it's easier to find the movie more entertaining."

Others say it "traffics in genre clichés" (The New York Times) and "doesn't hit hard enough" (Los Angeles Times). A brutal critique in The Washington Post calls it "soul-sucking" and gives it 2.5 stars out of 4.

Here are excerpts from five reviews this week:

♦ "Doesn't pop:" Director Yann Demange makes a pointed effort to not tell the typical "Scarface” rise-and-fall version of this story, focusing instead on the family aspects and the father-son tale. Yet that puts it at odds with itself, and “White Boy Rick” doesn’t pop the way it should, and it often feels like it doesn’t have room to properly breathe. . . .
Merritt, in his first acting job, has the juiciest role, but he doesn't display the charisma that was essential to Rick's ability to work both the Feds and the streets and thrive in both roles. He has a natural, understated screen presence, but the sizzle is missing, and he falls short of hooking the audience into his incredible journey. . . . The things that made Wershe's story so captivating aren’t maximized, and as a result, neither is the audience investment. . . . This telling gets a lot of the details right, but pulling away, the bigger picture is left rather blurred. -- Adam Graham, The Detroit News

♦ "McConaughey is so good:"  -- As a first-time actor, [Merritt] is solid enough, although I'm not entirely sure this novelty adds anything particularly special to the movie, especially when McConaughey is next to him giving a whole performance. McConaughey is so good and emotionally affecting as Richard Sr., in both vulnerable and tough moments. -- Lindsey Bahr, AP (in Freep)

♦ "Genre clichés:" There is a murky point in this movie, and it’s worthwhile. But it arrives in fragments. . . . Squint and you can sometimes make out the bigger, more complex stories in "White Boy Rick," including those of a great city violently brought low; of fragile communities left to fail and rot; and of a legal system that seems permanently broken. Too often, though, the movie traffics in genre clichés -- Manohla Dargis, The New York Times 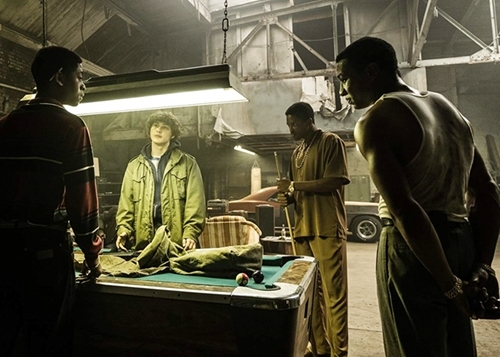 ♦ "Doesn't hit hard enough:" Merritt is charming, authentic and incredibly watchable, and he gets a heavy-duty assist from his most frequent scene partner, Academy Award winner Matthew McConaughey, in full sleazebag mode as Rick Sr., a shady gun dealer. . . . McConaughey transcends the wilder aspects of his character to deliver a stripped-down and touching performance. . . .
This film doesn't hit hard enough as a drug-dusted fairy tale or a gritty criminal justice system indictment. But as a portrait of a family coming together and falling apart . . . it's tender and tragic among the glitz and the grime. -- Katie Walsh, Los Angeles Times

♦ "Depressing:" It's a little bit harder to explain why you should watch such a depressing, and at times even soul-sucking, movie. . . . Whether there's any deeper meaning to a story that tries only halfheartedly to say something about the fragility of family is debatable.
Still, the performances, which include cameos by Bruce Dern and Piper Laurie as Ricky's grandparents, are all very good. -- Michael O'Sullivan, The Washington Post

Stars Matthew McConaughey and Richie Merritt "provide the movie with its only real distinction," Stephen Farber of the Hollywood Reporter, writes Monday after a Colorado festival screening. At Variety, Peter Debrudge says it "feels like a glorified TV movie, albeit with a better cast and a much hipper score."

A critic at IndieWire also is unimpressed.

The locally familiar story is set in 1980s Detroit at the height of the crack epidemic and the federal war on drugs. It recounts how teen Richard Wershe Jr., living in Ravendale Heights on the east side with his blue-collar dad, served as the FBI's youngest undercover informant ever, and later became a drug dealer who later was dropped by his handlers and sentenced to life in prison. 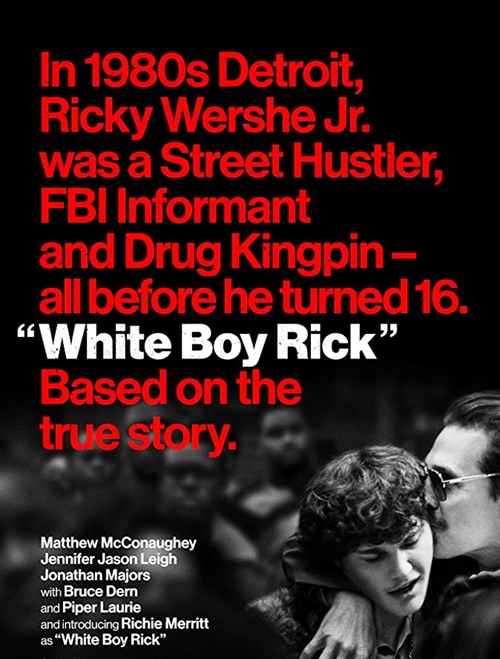 He was paroled in July 2017 after 29 years and is finishing a Florida term for being part of a stolen car ring. Wershe's current release date is 2021.

His biopic premiered this weekend at the four-day Telluride Film Festival, with daily screenings followed by remarks from director Yann Demange and McConaughey, who plays Richard Wershe Sr. The 110-minute film also features newcomer Merritt in the title role and Jennifer Jason Leigh and Rory Cochrane as FBI agents.

Verna and Roman Wershe, retired Chrysler workers who lived across Hampshire Street from their grandson, are played by Piper Laurie and Bruce Dern. Dawn Wershe, the protagonist's drug-addicted sister, is played by Bel Powley.

♦ Excerpts from six writers.
♦ Video of the director and cast members talking about the story.
♦ Gallery with nine film scenes.

"White Boy Rick," the street nickname that lauched a thousand headlines, was filmed over 11 weeks from March to June 2017, mostly in Cleveland. Scenes also were shot in Detroit, Las Vegas, Miami and a state prison in Grafton, Ohio.

Its next pre-release splash will be at this week's Toronto Film Festival, with a single screening Friday night at the Ryerson Theater on Victoria Street in the city's Garden District. 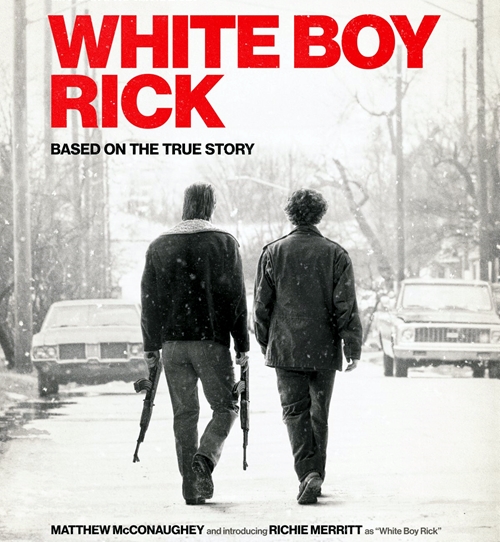 ♦ "Fails to engage:" Director Yann Demange . . . does a fine job recreating time and place, and the film has a gritty texture. Where it falters is in creating characters who can compel audiences in the way that the great noir anti-heroes did. Despite impressive performances by Matthew McConaughey and newcomer Richie Merritt, the film fails to engage or enlighten. . . .
There are a lot of  African-American characters in this movie, but almost none of them comes alive. The film is so focused on the two white protagonists that all the black characters are reduced to little more than malignant supporting players. . . . The film never succeeds in turning this legal travesty into a meaningful or moving human drama." -- Stephen Farber, Hollywood Reporter

♦ "Formidable new performer:" Demange plods through one-note scenes of familial disputes, hedonistic dance parties and shouting criminals with a persistent lifeless quality. Even the formidable new performer at the movie’s center can’t do much to salvage the drama from overplaying the dreariness of Ricky’s world. . . . "White Boy Rick" attempts to mine drama from circumstances without succeeding at making any of its characters all that sympathetic." -- Eric Kohn, IndieWire

♦ "A glorified TV movie:" Although Demange directs the heck out of it, "White Boy Rick" ultimately feels like a glorified TV movie, albeit with a better cast and a much hipper score. . . . The film doesn't capture the cocky, chosen-one status Rick must have felt working for the authorities. . . .
There’s something inescapably phony about the way pretty much every detail plays out. . . . What ultimately happened to Wershe was a scandal, though it’' hard to get too worked up when the movie itself is such a jumble. -- Peter Debrudge, Variety

♦ "Deep supporting cast:" [It's among] movies you need to see this September. . . . A deep supporting cast -- including rappers YG, Danny Brown, and IshDARR -- adds some street cred to this cautionary tale of the thug life pre-Thug Life. -- Charles Bramesco, Rolling Stone

♦ Praise for lead actors: McConaughey gives one of his best performances as Rick Sr. He imbues the rough-hewn patriarch, a well-intended but ill-equipped father, with vulnerability and regret that come through as Rick struggles to keep his family together and to maintain some semblance of authority. . . .
We understand his motivations and desperation. Richie Merritt, a Baltimore teen with no prior professional acting experience, is quite good as Rick Jr., a role with its own unusual complexities. -- Eric D. Snider, Crooked Marquee

♦ "A breakthrough performance:" Yann Demange flexes his directorial muscles in his second feature. With a Scorsese-esque sensibility and a killer soundtrack, and featuring a breakthrough performance by Merritt as the lead, White Boy Rick is an affecting and intelligent cautionary tale about the consequences of people and governments seeking simple solutions to complex problems. -- Kerri Craddock, Toronto International Film Festival programming director

This four-minute promotion has a discussion of the story by director Yann Demange, actors Matthew McConaughey and Richie Merritt, and other cast members: 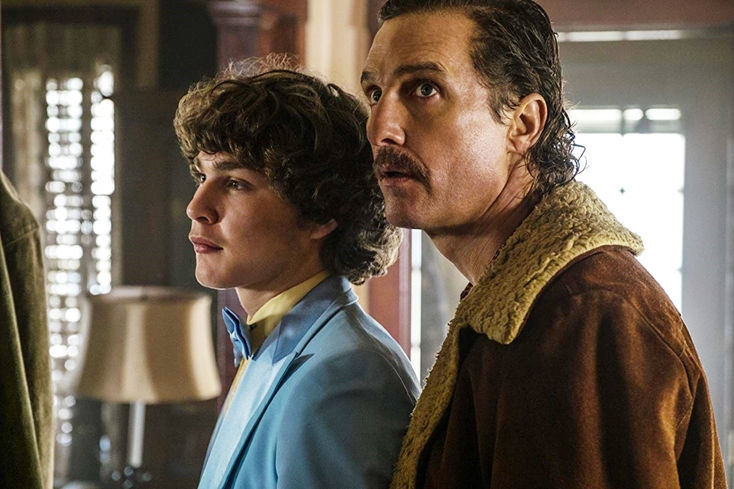 Richie Merritt and Matthew McConaughey earn praise even from critics who pan their new film. 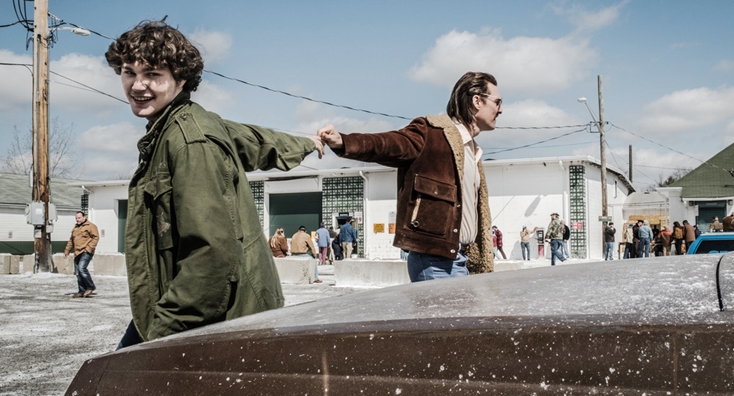 This early scene outside a Detroit gun show is symbolic because the saga takes father and son in different directions. 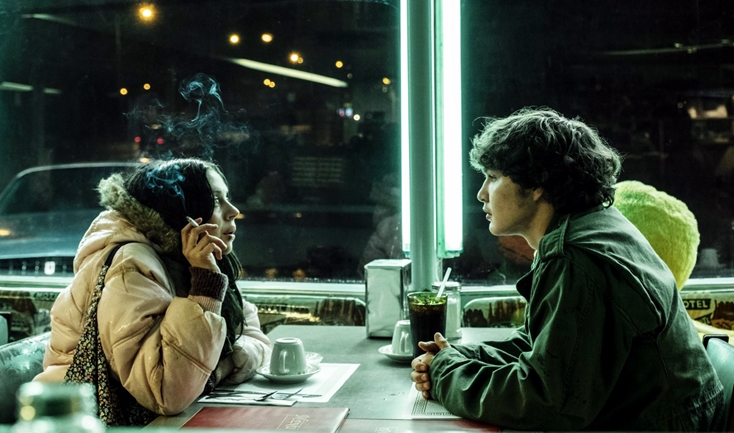 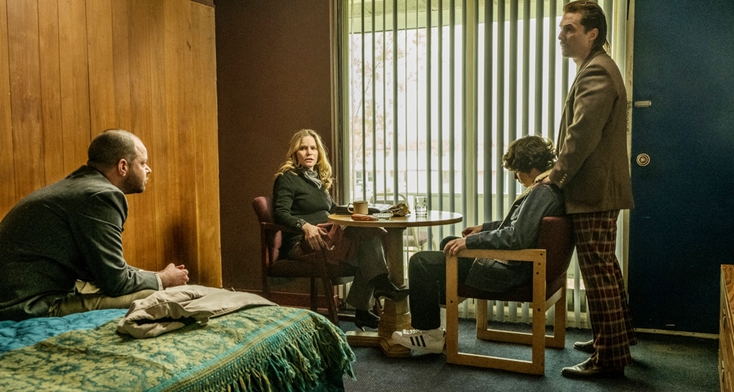 At this turning point, FBI agents played by Rory Cochrane and Jennifer Jason Lee press the younger Wershe to turn informant in exchange to save his dad from arrest. 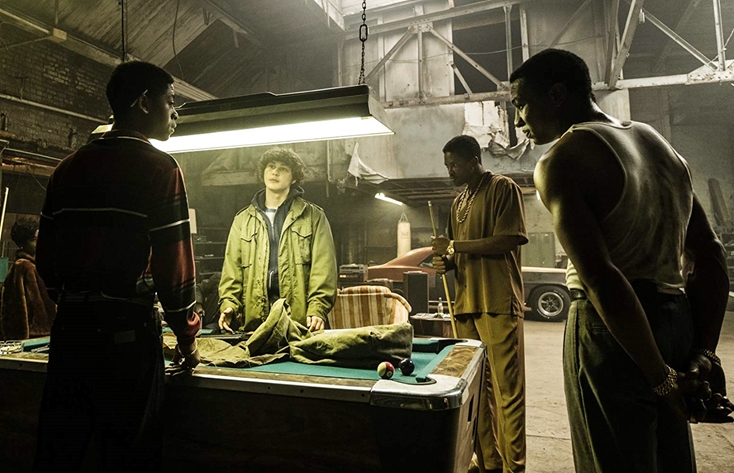 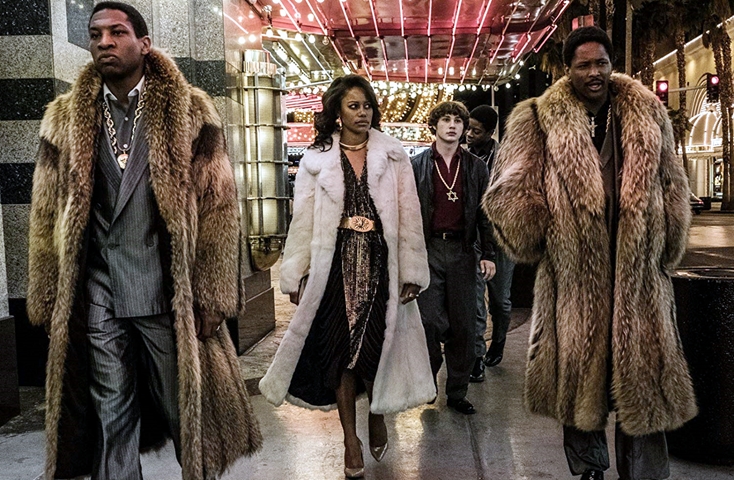 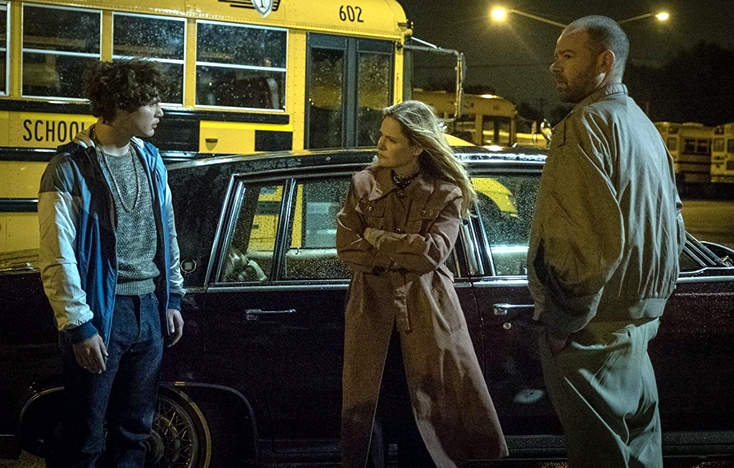 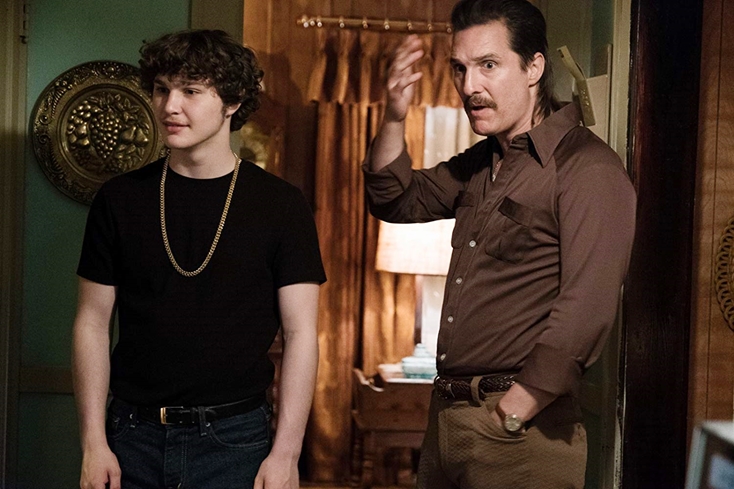 Portrait of a son and father united by crimes. 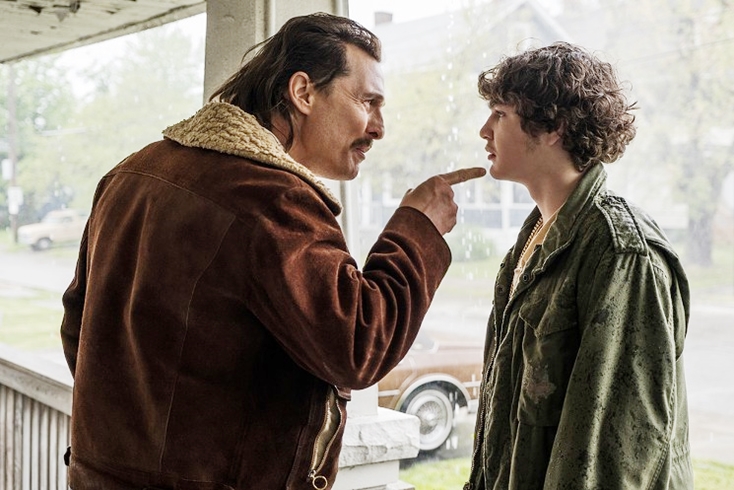