Dawn Wershe, Richard Wershe Jr.'s sister, sat in a row nearby. Wershe's 30-year-old son sat next to me at a screeening Thursday night in Novi for the film about the sad life of a Detroiter known as White Boy Rick, a convicted drug trafficker who has been behind bars since his late teens. He's now 49. 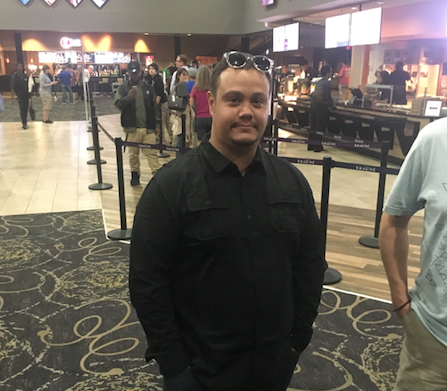 Rich W. Wershe, the inmate's son, before the film.

Dawn, who is portrayed in the movie as the drug-addicted, wild sister who adds to the family dysfunciton, sobbed loudly and uncontrollably at times during the film. Wershe's son, a University of Michigan graduate with a white-collar job who prefers to go by simply Rich W, turned to me afterward and said dryly: "It's a movie."

Afterward, while the French director Yann Demange was on stage discussing the movie, Dawn Wershe got up and screamed and asked why no one ever spoke to her about the film. Then she piped up: "Where's my money?"

Demange assured the audience that he spoke to her brother regularly while working on the film and cares deeply about the real characters.

Wershe's son, far mellower than his aunt, sat in his recliner at the Emagine Novi next to me and offered a mixed bag of opinions. He says the film didn't fully show how caring a person his dad is, and how truly smart he is. He also said Wershe's dad, Richard Wershe Sr., who was played by Matthew McConaughey, is portrayed too positively, almost as heroic at times.

"I called him Dick," the grandson says, describing Richard (Rick) Wershe Sr. as an operator, always looking for a scheme to make money.

It was a bit of a surreal evening, considering I've known some of  the characters in the movie for years. As a Detroit News reporter, I started speaking to Wershe by phone in the early 1990s and did so for decades until a few years ago when Hollywood came knocking. I believe I got pushed off his select prison phone list. I've also known Dawn a long time. 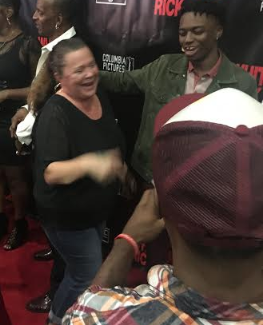 Dawn Wershe talks to the cast before the movie.

But over the many years of conversation, I've come to agree with the son that his dad was very smart.

All in all, I enjoyed the film. It was entertaining. But because I know the facts so well, it's a little bothersome that some things simply didn't happen as portrayed.

For example, while Wershe is on trial as a teen in the film, the FBI asks him to cooperate in a sting to bust crooked cops. He complies, but gets no credit when it comes to his life sentence. In reality, Wershe had already been convicted  and was in prison in the Upper Peninsula when the FBI asked him to help set up a sting. Wershe lured Mayor Coleman A. Young's niece, Cathy Volsan, who was in rehab in the U.P.

She in turn recruited her father, Willie Volsan, a career thug who recruited dirty cops to protect fake cocaine shipments being flown into Detroit City Airport in the early 1990s by undercover FBI agents posing as drug dealers.

In other words, if you don't know the real story, it's easier to find the movie more entertaining.

♦ Summary of 5 reviews: Actors get more praise than the film.

Another person in attendance Thursday night was Johnny Curry, a major drug trafficker from Detroit's east side who went to prison and is now out. I used to talk to Curry by phone as a News reporter when he was in a federal prison in Minnesota. Curry's gang was a suspect in a drive-by shooting that killed a 13-year-old.

That unsolved murder comes up in the film. 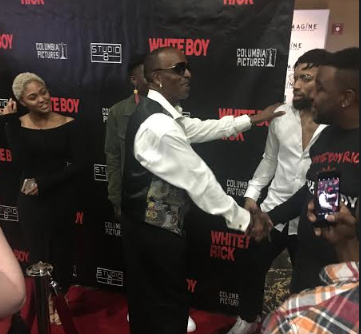 Johnny Curry, in sunglasses, talks to cast members before the Novi screening.

Afterward, I asked Curry what he thought. He said it was positive for Wershe. As for him, he says, it was "way off."

After the movie, Dawn Wershe responded to someone on Facebook who posted: "Good movie."

I give kudos to the cast, including McConaughey, a young Richie Merritt in the title role and Bel Powley as Dawn Wershe.

Shortly before departing the theater, I asked Wershe's son, who has never spent time with his dad, what he thinks it will be like when they do hang out. Wershe is schedule to be paroled from Florida in 2020, where he's serving time for partaking in a stolen-car ring while behind bars.

"Honestly, I don't know," the son said."We've got some catching up to do."