Santorini Estiatorio Closes . . . for Remodeling or Something Else? 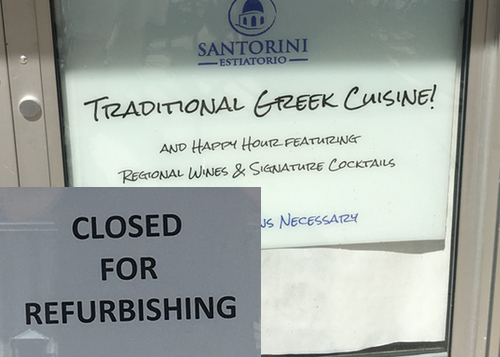 We're giving up on finding out more about this. Multiple calls to Greektown haven't been returned, so make of that what you will.

Anyway, the Santorini Estiatorio -- one of the more upscale Greek restaurants left in the Detroit neighborhood -- is closed. The sign says for refurbishing, but we hear rumors it may be permanent, or at least, that it won't reopen as the Santorini. Calls to the Papas family, the owners, as well as others have been fruitless, like we said.

Now where will we cash in our casino comps? Surely someone else will take them, but we kinda liked the Santorini and its old-Greektown vibe.

Any bets on what might take its place, if it does indeed go away? When Five Guys can invade what was once sacred Hellenic ground, anything's possible. Maybe an amusing, postmodern twist on Greek food. Kinda . . . ironic? Like when they light the cheese ablaze, some bored hipster waiter just says "Call 911" in a real bored voice.

Whatever happens, the world only moves in one direction. As any Greek could tell you.