The Comerica Park Spitter Story That Flew Around the World 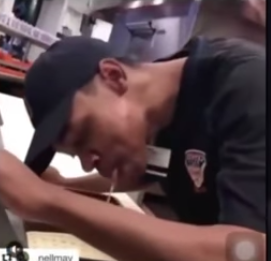 Jaylon Juwan Kerley of Roseville, the 20-year-old food worker at Comerica Park charged with a felony for spitting in pizza dough, couldn't have a clue his gross action would send his name traveling around the world.

But that's just what has happened.

Newspapers and TV station websites from KVAL in Eugene, Ore., to ABC 8 in Tulsa to the Los Angles Times to WGRB in Albany, N.Y., carried the Associated Press story about Kerley that grossed out people from coast to coast and beyond. The Guardian in London ran a bylined story about the videotaped incident.

“The allegation in this case is disturbing on so many levels. Yesterday I literally refused to order food. We all want to make sure all food that we order is clean, safe, germ-free, and unadulterated with any substance that should not be there.”

Fox 45 News in Baltimore posted a video on its website with this caveat:

WARNING: This video might be considered too graphic or disturbing for some viewers. Viewer discretion is advised.

Spitting on food unfortunately is nothing new. When I was growing up, there were always rumors that certain classmates working at a local pizzeria regularly spit on the pizza.

Last year, Jacksonville Police Chief Patrick Dooley sent an internal letter to the department after the owner of a restaurant issued a warning that his employees might be spitting on the food of law enforcement.

“It has come to my attention that the owner of Cruisers has given indications that his employees in the past or will in the future spit saliva in the food of law enforcement,” the letter read, according to the New York Post.

In 2015, a former chef at a Mount Olive, N.J., restaurant was sentenced to three years in prison for spitting on a customer's roll. The chef apparently became angry after a woman kept sending her chicken française back to the kitchen with complaints.