Detour vs. Jalopnik: Two Local Journalists Look at Warren from Both Sides Now

This is about playful jabs with soft gloves, not serious swipes. What seems like sparring is likely to be followed by smiles and clink-clink at the next media meetup, not by stinkeye.

File it under "It's All Content," which is why we also jump in the ring. 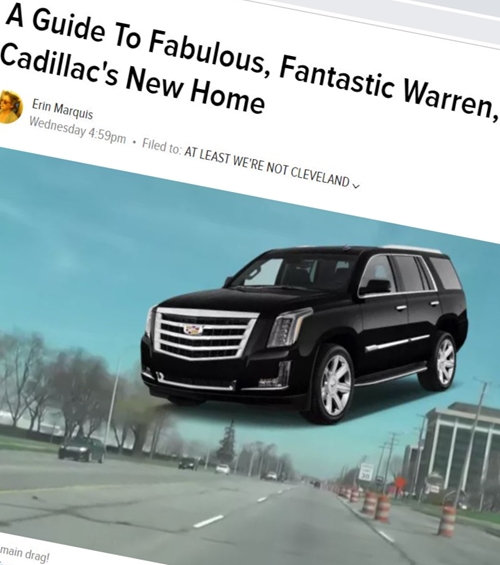 In Round One, Erin Marquis, managing editor of Jalopnik, posts a whimsical reality check for the roughly 110 GM Cadillac employees whose jobs are moving from Lower Manhattan to Warren:

Cadillac’s leaders couldn’t have chosen a more spectacular metropolis than Warren as a follow-up to life in New York. And as a lifelong resident of Metro Detroit and a traveler of the tri-county area in general, I am uniquely qualified to take GM on a dazzling virtual tour of this fair city. . .

Stroll the grid of four-lane wide streets with careless ease along Warren’s perfectly flat landscape and drink in the world-famous sights, such as the Warren Community Center, built in 2003, or the Warren Stamping Plant and Truck Assembly Plant. . . . Drop by Continental Communities, the trailer park where the Eminem film "8 Mile" was filmed. . . .

If you like dank sports bars that haven’t been redecorated in nearly 30 years, Warren is for you.

In that same vein, Marquis summarizes Warren's main dining options as "Middle Eastern and classic American," including "12 different Coneys where you can order chili fries and gyros."

Try one every month to keep things interesting over the next year! . . .

There are plenty of pubs and diners serving up a rainbow of different burgers-and-fries combos. . . . No matter how you prefer to have grease delivered to your insides, Warren has it. 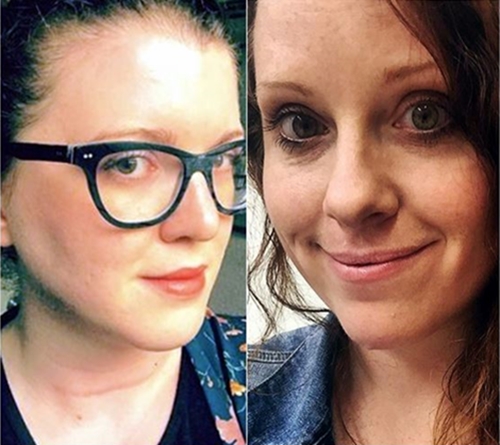 Detour Detroit founder Ashley Catherine Woods winces at the cheap shots, or perhaps just senses a [mock] media spat worth staging. Whatever the reason, she steps up a day later for Round Two.

In her biweekly newsletter, Woods pokes back in defense of Michigan's third-largest city:

We were a bit put off by auto blog Jalopnik’s characterization of Warren as a taxidermically preserved hellscape of Big Boy restaurants and MAGA-loving seniors. Which, don't get us wrong, are easy to find in Warren! What we often overlook is that Warren's demographics are rapidly changing -- almost a third of the city's residents are now people of color.

And amid Jalopnik’s distaste for the city’s trappings of poverty . . . why not take like four seconds to at least mention those things that don't suck? Like dim sum at Golden Harvest, ice cream from Leason's Dairy Bar or Tringali’s famous cannoli? And Value World -- one auto blog’s trash is another newsletter's treasure.

Yeah, Warren is a poor fit for Cadillac’s fancy New York executives. . . . But for those of us worn down by the relentless influx of $15 cocktails, cortados, subway tile and other AirSpace trappings, a giant, greasy Italian sub from Ventimiglia’s (located across the road in Sterling Heights) -- and what it represents -- needn't be so easily dismissed.

And that right there is another reason we're glad our area has more than a few feisty, frisky, fearless media pugilists.