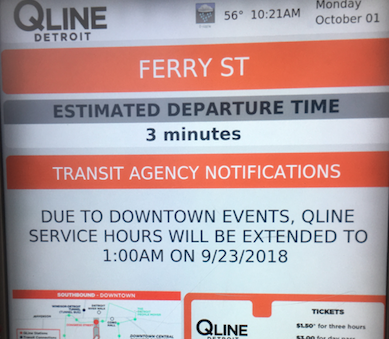 I'll state it again and again: I'm a fan of the QLine. I have an annual pass. I try riding it at least twice a week. And yes, things have improved from the days where you'd wait 17 minutes at the Campus Martius stop during rush hour in five-degree temperatures.

It's a common complaint I hear from riders -- the estimated time of arrival is sometimes frozen for as long as 10 or 15 minutes.

What made it more bothersome was a message on the electronic board, which said:

Look at the top right corner of the board and you'll see that Monday's date is Oct. 1, not Sept. 23.

Sure, the dated message is no big deal. But it tells me between the dated message and the stagnant time of arrival, something is amiss, and someone is not paying close enough attention. I'd rather see the waiting time adjusted upward rather than let it sit stagnant.

If the QLine wants to expand or at least survive, it needs to pay attention to details. Little ones can make or break a system.