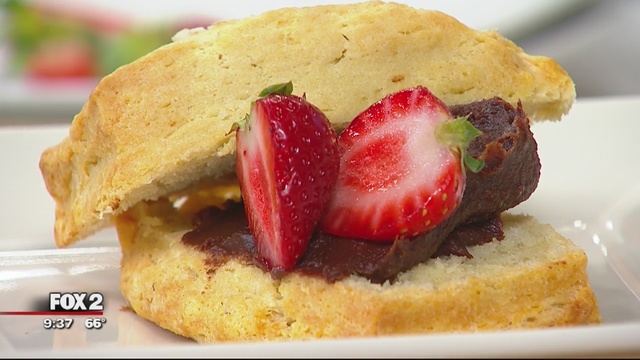 One thing is certain: Metro Times food critic Jane Slaughter loves her biscuits, and always has since eating her mama's.

Even though I still love store-bought biscuits, I love Avalon's biscuits even more. Biscuits are just damn good, whatever. I'm not familiar with the new generation of canister biscuits, but I read that Pillsbury is now offering a "Flaky Layers Butter-Tastin'" biscuit with soybean and palm oil, a bunch of chemicals and 2 percent or less of butter. And I'll bet it's good anyway.

That said, Pillsbury won't keep anyone away from Avalon's year-old Biscuit Bar, where one rectangular breakfast biscuit that looked not overly large left me fully sated and even offering bites to my companion. That's partly because it was stuffed with eight pieces of bacon, New York white cheddar, and a perfect semi-scrambled egg. And also because its buttery flakiness was so plush.

Anne Weertz, Avalon's sweets manager (what a great title; it encompasses biscuits, scones, and croissants) says her biscuits get their height and layering from lamination. That essentially means folding, akin to the process used to create layers in croissants.