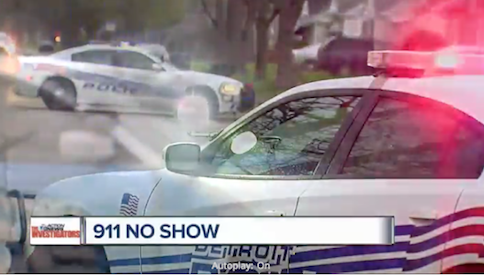 City officials have bragged about the Detroit Police Department's improved response time. This is nothing to brag about.

Police showed up 4 days and 34 minutes after repeated 911 calls about a domestic assault in progress, reports Ross Jones of WXYZ. Not a bad response time if we're going by 1895 standards.

"It failed for us," sayts the woman assaulted by her boyfriend.

It started Sept. 15 when the mother was visiting her young adult daughter on Detroit's west side. She heard screaming as she stepped out of the car.

"I run up to the door because I realized it was my daughter," the mother tells WXYZ.  "She comes to the door and he's behind her, he's attacking her."

Her daughter's boyfriend, who had previously abused her, was pounding her with his fists.  The mom ran up to the door and called 911. It was 1:29 PM.

"My daughter's boyfriend was beating the (expletive) out of her," she told the 911 dispatcher, who said she'd send out a police car.

Forty minutes passed and she called again, but received an automated message. She hung up and dialed 911 once more.

"Another automated message," she said.

At 2:17 PM, she made her fourth call, this time reaching a dispatcher.

"I already called it in 45 minutes ago and I still haven't had a police officer come yet," she told the woman on the other end of the line. Again she was told officers would be dispatched, and again she waited. No one came.

In all, she called five times.

The boyfriend returned around 5 p.m. and attacked the daughter against, Jones reports.

The department is investigating, Assistant Chief James White says. "It absolutely disturbs me, if that's actually what happened," he adds.