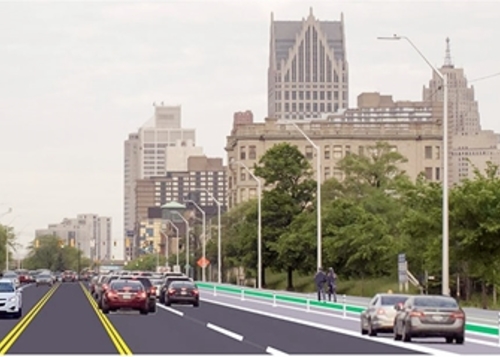 John Gallagher, business columnist at the Free Press, doesn't exactly come out and tell Keith Crain to shut his pie hole about bike lanes, but in Friday's Freep he makes a better case for them than Crain makes (and makes) against them:

The real question is: What is the city designed for? Is it designed to move vehicles along streets at a high rate of speed? Or is it designed for engagement, for people to interact with each other socially and commercially in the neighborhoods and along our commercial corridors?

If you accept that it's the latter — as officials including Detroit planning director Maurice Cox have been preaching — then creating opportunities for social engagement, with wider sidewalks and slower traffic and closing some streets — such as creating Spirit Plaza by closing Woodward for a block north of Jefferson — is the way to go.

Gallagher then gently refutes the usual arguments -- no one uses them, they slow down Keith Crain's car. He does so calmly, like an adult not driven to road rage by a few cyclists using Jefferson Boulevard in relative safety.

No doubt this will set off the usual debates. But we're glad someone with a high profile platform sticks up for those of us who travel on two wheels.